SINGAPORE - Falsehoods could be spread in mother tongue languages and dialects, and the potential impact of such messages should not be ignored, said Assistant Professor Mohamed Elmie Nekmat of the National University of Singapore (NUS).

Appearing before the Select Committee on Deliberate Online Falsehoods on Friday (March 16), he noted that many debates on disinformation have been conducted in English.

However, some segments of society, such as older Singaporeans, may be more comfortable in their mother tongues, and messages in these languages could go viral on closed-group platforms such as WhatsApp chat groups, he said.

This is why there should be more efforts to examine the impact of misinformation in different languages, said Prof Elmie.

On the potential impact of falsehoods spread in Malay, he said: "The language is almost always closely linked to religion, people are more comfortable with it (the language) and because of that, the role of language is also very influential in falsehood dissemination".

He added that messages originating from neighbouring countries such as Malaysia and Indonesia may affect Singapore as well.

One example is an untrue viral allegation originating from Malaysia last year, about how shoe company Bata Primavera stocked footwear with the word "Allah" on the soles. 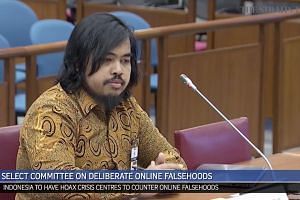 Hoax crisis centres will be launched to counter falsehoods ahead of Indonesian elections, says founder of anti-hoax network

Asked by Select Committee member Sun Xueling, MP for Pasir Ris-Punggol GRC, about the potential spread of falsehoods through the Chinese language and its dialects, Prof Elmie said this could be a concern too.

"They are very relatable to a certain community... you see more responses from the particular group that speaks that language," he said of information spread on messaging platforms.

Prof Elmie added that seniors may not be as well aware of the dangers of falsehoods as younger Singaporeans, as discussions on fake news are usually held in English.

"Given that deliberate online falsehoods can erode social trust and rupture society along racial lines in irreversible ways, it is necessary to implement the best safeguards possible to secure our social fabric," he said in his written submission to the Select Committee.

He added: "Such efforts would require more relevant forms of regulations, educational initiatives, as well as greater research into the impact of deliberate falsehoods in a multiracial society."

Prof Elmie also called for laws that compel content distributors to proactively stop fake news and false information from spreading on their platforms.