SINGAPORE - Minister for Social and Family Development Tan Chuan-Jin has urged the public not to read too much into one of the Facebook posts he made shortly after Tuesday's (Sept 5) announcement that he had been nominated as the new Speaker of Parliament.

In the personal post, Mr Tan had written: "May God continue to grant me wisdom, courage and love in all that I do. However inadequate as I may be, I hope that I can fight the good fight, finish the race and keep the faith.

"And of course. My family. Words cannot express how much your continued love and support mean to me in carrying out my duties and responsibilities."

This post came after his initial post where he said he had accepted Prime Minister Lee Hsien Loong's nomination to become Singapore's 10th Speaker.

The second post triggered a debate among netizens over the meaning of his words and has since attracted more than 400 comments.

Mr Tan, 48, subsequently edited the post on Wednesday evening, urging the public not to read too much into it.

"I notice some doing serious practical criticism of every word and punctuation! It's a personal post on faith and family, hence I kept it separate," he added. 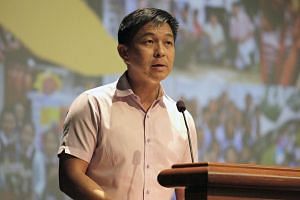 "It's an affirmation of what I believe and cherish, as best as I can manage. I've shared these sentiments before so relax... no need to over-interpret LOL."

Mr Tan's nomination came as a surprise to many, given that he had been viewed as a member of the core of the fourth-generation political leadership.

The nomination means that Mr Tan will be resigning as Minister for Social and Family Development, and will no longer be part of PM Lee's Cabinet.

He will replace Madam Halimah Yacob, who resigned last month to contest in the upcoming presidential election.

He said: "It has always been a privilege and honour to serve and that doesn't change with the role. Will do my best. And more."

The outgoing minister received an exuberant and unusual farewell on Thursday evening.

About 150 employees of his ministry, the National Council of Social Service and SG Enable took to the outdoors with him for a warm-up session before he led some of them on a 6-km run at MacRitchie Reservoir.