Singapore's economy is forecast to grow 1 to 2 per cent this year, a dip from the last decade's growth of 5 to 7 per cent, he reminded Singaporeans in his Chinese speech.

Technology is disrupting the current economic model, Mr Lee said, giving examples of technology-driven businesses which are the "new normal".

"We used to visit shops to buy incense and joss paper. Now we can do so online," he said. "A new 'Vendcafe' just opened in Sengkang West. Be it seafood horfun or claypot chicken rice, customers just need to press a few buttons, and within three minutes, piping hot local food is ready."

Businesses must change and adapt in order to thrive, he said, emphasising that small- and medium-sized enterprises (SMEs) will need help. 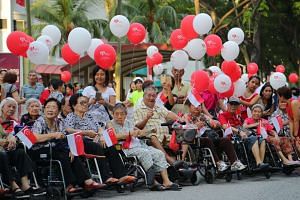 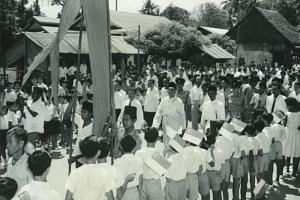 National Day Rally 2016: Important for Singapore to have minority race President from time to time

"I know that SMEs particularly find it challenging to transform and tough to survive. That is why SPRING and IE Singapore are working to help SMEs build new capabilities, use technology, and expand overseas," he said.

But there are bright spots in many sectors, he added, naming two.

Singapore firm Hiap Huat Holdings began as a pottery importer in 1947. It started Luzerne in 2004, to specialise in designing bespoke tableware.

"Their clients now include the world's leading restaurants, hotels and celebrity chefs," he said.

Fragrance Foodstuff Group has improved productivity by automating part of its production process for its bak kwa (barbecued pork), he said. It is also selling its products online.

"But the machines cannot do everything, the bakwa still needs to be barbecued over charcoal for the best taste!" said Mr Lee.

The rally audience will be able to try Fragrance bak kwa after the speech, which was delivered at the Institute of Technical Education, he added.

Workers too need to adapt, he said.

One example is Mr Kuah Leng Kee, 57, who has worked with Fragrance for 30 years. He used to be in charge of making sure the bak kwa is spread evenly on bamboo trays - work that is now done by machines.

He is now in charge of training, and finding ways to improve the production process.

Mr Goh Yew Cheong, 54, has switched from construction to being a driver, and is now training to be an associate heart valve specialist at Edwards LifeSciences, he said.

"He was used to heavy work and now has to do fine needle work. But with proper training, he is performing well and is due for certification soon," said Mr Lee.

"I know everyone is concerned about their livelihood. Government is concerned too," he said. "Our strategy is to help businesses transform, and use SkillsFuture to help workers."