Indonesian maid Dewie, just 1.4m tall, has to tiptoe on a chair to reach the ceiling fan in her employer's living room whenever she cleans it.

A close shave two months ago has her cheering now the increase in minimum accident insurance coverage for maids, which will go up from $40,000 to $60,000 on Oct 1.

Ms Dewie, who is 29 and goes by one name, had lost her balance then and toppled backwards onto the armrest of a sofa - narrowly avoiding a hardback chair nearby.

She shudders to think what would have happened if she had broken her back.

"I try my best to be careful, but accidents can happen. So it's good to have more money for my family. It can help them if I'm gone," said Ms Dewie, who was at the labour movement's inaugural May Day celebration for maids yesterday.

Employers interviewed by The Straits Times said the enhanced insurance would ease their concerns. 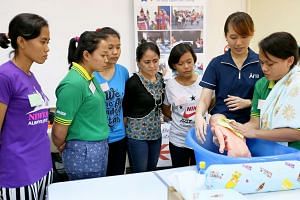 "If my maid was hurt, I would also worry about how her family would cope," said sales manager Sarah Goh, 48, whose maid is from the Philippines.

She was pleased to hear that insurance coverage will be standardised, so maids are not short- changed when insurers decide not to cover certain accidents.

With the changes, annual premiums are expected to go up by between $7 and $15, but Ms Goh said the "small amount can go a long way in helping my maid and her family".

Organisations working with maids also cheered the improved protection, but noted that it would help only in cases of death or permanent incapacity.

The Centre for Domestic Employees (CDE)hopes to see a review of medical insurance next.

CDE chairman Yeo Guat Kwang said that while the centre has handled only a handful of "compensation" cases since its launch last year, "we can't just wait for the number to grow".

Insurance will help maids, their families, and their employers better cope with the unexpected, he said.

Minister of State for Manpower Sam Tan said at the May Day celebration that his ministry was reviewing the medical insurance policy for maids and would announce its findings "at the right time".

Meanwhile, non-governmental organisation Transient Workers Count Too (TWC2) urged that the Work Injury Compensation Act be extended to maids so they can be entitled to benefits such as medical expenses and paid medical leave.

Under the Act, the compensation limits for death and permanent incapacity are also higher, said TWC2 president Noorashikin Abdul Rahman.

But in 2008, then Minister of State for Manpower Gan Kim Yong had explained that it would be better for maids to be covered under insurance instead of the Act because the nature of their work "makes it difficult to determine whether the injury is sustained as part of the work or otherwise".