The Leader of the House has given Workers' Party (WP) chairman Sylvia Lim a deadline to withdraw her comment on the goods and services tax (GST) hike, and to apologise to Parliament.

Ms Grace Fu, who is in charge of government business and procedure and order in Parliament, yesterday requested that Ms Lim does so by tomorrow, before the end of the ongoing Parliament sitting.

Ms Lim told The Straits Times she has asked to make a statement in Parliament to "clarify the matter", and is working with Speaker Tan Chuan-Jin to schedule a time.

Ms Fu's statement is the latest development in a week-long saga that has seen three Cabinet ministers and a senior minister of state coming out to respond to Ms Lim's comment.

During the Budget debate last Thursday, the Aljunied GRC MP voiced her suspicion that the Government had intended to introduce a GST hike immediately, but that it backed down after test balloons it floated got a negative response. People noted that leaders, including Deputy Prime Minister Tharman Shanmugaratnam, had said the Government had enough money till the end of the decade, she said.

"I rather suspect myself that the Government is stuck with that announcement. Otherwise, if their announcement had not been made, perhaps we would be debating a GST hike today," she added.

Home Affairs and Law Minister K. Shanmugam and Finance Minister Heng Swee Keat took issue with Ms Lim's comment, saying she was in effect accusing the Government of being untruthful. Senior Minister of State for Law and Finance Indranee Rajah also wrote a Facebook post on the matter.

Yesterday, Ms Fu, who is Minister for Culture, Community and Youth, asked to put the facts on record.

She said the Government had been consistent on its position - that it had enough to fund expenditure for the current term until 2020, but would need to raise revenue beyond that.

The first mention of the need for a tax increase for future spending was in Prime Minister Lee Hsien Loong's National Day Rally speech in 2013, she said. Subsequent comments by DPM Tharman in 2014 and 2015 and Mr Heng last year had been in line with this. 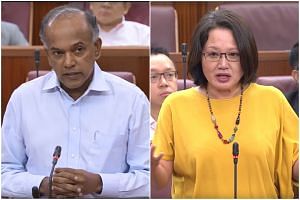 Heated debate over GST hike between Government and Workers' Party

"The Government never floated 'test balloons' on this matter," said Ms Fu. "It has been deliberate and consistent in all its statements since August 2013."

Noting that Ms Lim had said her comment was based on suspicion, Ms Fu asked if she would withdraw it now. "With the clarifications that have been given to her by ministers, both in this House and elsewhere, Ms Lim cannot contend that her 'suspicion' remains reasonable and honestly held," said the minister. "Her allegations have been refuted, the facts she cited have been shown to be inaccurate, and she has not raised any further facts to substantiate her 'suspicion'."

Parliamentary privilege, she said, does not entitle MPs to "knowingly maintain allegations that have been shown to have no factual basis".

"Now that Ms Lim has been apprised of the facts, I request that she withdraws her allegation that the Government had floated test balloons on the need to raise revenues within this term and had intended to raise the GST immediately, and apologise to this House, before the end of this sitting of Parliament on Thursday, March 8, 2018," said Ms Fu.

The Leader's statement in the House underscores the seriousness with which Parliament is taking the issue, said political analysts.

Singapore Management University law academic Eugene Tan said: "With Ms Fu taking the lead, it underlines the seriousness with which the House views the alleged breach by Ms Lim."

MPs enjoy parliamentary privilege, which means they cannot be sued for what they say in the House. But comparative politics researcher Felix Tan of SIM Global Education said they can be referred to Parliament's Committee of Privileges if deemed to have abused it.

The committee can mete out punishments from scoldings to jail terms not extending beyond the current Parliament session. But it cannot remove anyone as an MP, as the committee does not have the power to undo the choice of the people, said Associate Professor Tan.

Cases where MPs' statements were challenged

Workers' Party (WP) Non-Constituency MP Leon Perera said an online video of his parliamentary speech was truncated, and Mediacorp only uploaded it in full after he e-mailed them. His comments came during an exchange with Senior Minister of State for Communications and Information Chee Hong Tat. His account was refuted by Mr Chee and later by House Leader Grace Fu, who asked Mr Perera to apologise and withdraw his statements. Mr Perera apologised for the "incorrect recollections", adding that he did not deliberately misrepresent the facts.

People's Action Party (PAP) MP Sin Boon Ann (Tampines GRC) cited an e-mail he got from a person unknown to him when criticising The Straits Times for its reporting of the Aware saga. He had not verified its contents, he said in Parliament, but "would not be surprised if it were true and would be very concerned if it is". Mr Sin apologised the next day in Parliament for a "lack of due diligence", and House Leader Mah Bow Tan later issued a stern reminder to all MPs to not rely on unsubstantiated allegations. This was untrue as DPM Lee had earlier informed the House that PTC was reviewing fare revisions, clarified Transport Minister Yeo Cheow Tong. Mr Tan apologised, and said: "There is no basis for that suggestion, and I withdraw it."

PAP MP Ong Kian Min (Tampines GRC) related a story from a grassroots leader who said he had been cut out of a business deal by a government-linked company (GLC). His account was refuted by Finance Minister Richard Hu, who said he had investigated and found no merit to the allegations. Mr Ong said he had no intention of misleading anyone into thinking Singapore's GLCs were adopting such practices. "If such an impression was indeed created, I apologise."

The late WP MP J.B. Jeyaretnam (Anson) said the Government had interfered with the judiciary by transferring judges who made decisions that upset it. In a separate sitting, he said the police abused their powers in arresting an individual. Home Affairs Minister S. Jayakumar refuted Mr Jeyaretnam's claims and asked him to apologise. He did not. Both cases were referred to the Committee of Privileges, which looks into complaints alleging breaches of parliamentary privilege. He was fined $2,000 for abusing parliamentary privilege, and another $25,000 for publishing a distorted report of the committee's proceedings in five newsletters and $1,000 for not declaring a pecuniary interest in a question he raised.