"Either they have to be accepted, or shown to be untrue. Keeping quiet about them was not an option," wrote Mr Shanmugam in a Facebook post.

He said that he had been asked why he spent some time asking Dr Thum questions. Last Thursday, the minister spent six hours grilling the academic during the public hearing for the Select Committee on deliberate online falsehoods.

"(Dr Thum's) main point, in his written submission to the Select Committee, was that Mr Lee Kuan Yew was the biggest creator of fake news in Singapore, a liar, and Operation Coldstore was based on falsehoods," said Mr Shanmugam.

In his submission, Dr Thum contended there is no evidence the detainees were involved in any violent communist conspiracy to overthrow the Singapore Government.

He also argued that the 1963 Operation Coldstore, in which over 100 leftist politicians and unionists were arrested and detained, had been politically motivated.

These were serious allegations, said Mr Shanmugam, and he had told Dr Thum that he will ask him questions on what he had said.

It took five hours plus to go through the documents and records carefully, he added.

He said that the research fellow with Britain's Oxford University had "refused to answer many of the questions directly" and had not read some of the material published by ex-communists on what happened in Singapore.

He also said Dr Thum had "disregarded the statements made by Chin Peng" - leader of the Communist Party of Malaya - among other issues.

He noted that some have expressed concern over his questioning of Dr Thum.

Said Mr Shanmugam: "People know me - I am direct, I deal with the facts, and say it as I think it is."

In particular, he noted, "I can see that Sonny Liew is not happy with what happened. It is quite understandable". 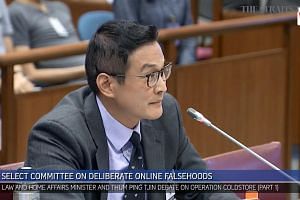 He was referring to the local cartoonist who had won three Eisner awards for his graphic novel, The Art Of Charlie Chan Hock Chye.

In the early hours of Monday, Mr Liew posted an illustration depicting Mr Shanmugam in a white suit and a black dog, calling it a "visceral reaction" to viewing Dr Thum's hearing session.

"What transpired during the six-hour hearing... was a kind of darkness I'd not quite seen before in Singapore with my own eyes," said Mr Liew.

He added that he would be surprised if the same line of questioning were taken in an academic inquiry, describing the hearing as a "relentless grilling over minutiae, where you speak only when spoken to, where one side seated on a high chair dictates all the lines and mode of questioning and unilaterally decides what sort of answers can be given, what sort of proof can be offered".

Mr Shanmugam, whose Facebook post was published after Mr Liew's, noted that the cartoonist is "quite close" with Dr Thum and that his award-winning book is also "based on" Dr Thum's version of history.

"I have not met Sonny, but I have to say he is a good cartoonist," said Mr Shanmugam. "He is a talent."