While small, it has been an effective opposition party. But some voters may now expect it to grow beyond a token presence in Parliament.

The Workers' Party has said repeatedly that it wants to be a "rational, respectable and responsible" opposition party. Indeed, it has had no qualms admitting that it is not ready to form an alternative government. Its main message to Singaporeans from the general elections in 2006 through to 2015 is that it is a check and balance against a People's Action Party (PAP) Government.

But with the party's 60th anniversary coming up, and party renewal high on the agenda, is this path still relevant?

Admittedly, this approach has worked well. In the 16 years since Mr Low Thia Khiang took over as secretary-general, the WP has become the most successful opposition party here, with six elected MPs and three Non-Constituency MPs.

In a recent interview with Lianhe Zaobao, WP assistant secretary-general Pritam Singh attributed this to the discipline injected by Mr Low and the WP leadership.

There can be no question that while small, the WP has been an effective party.

Some perceive that WP's 2011 triumph at the polls pushed the PAP Government to be more inclusive socially and economically, even though WP leaders Png Eng Huat and Daniel Goh were coy about taking credit for this during an interview with Insight.

But the WP's cautious approach in challenging the PAP Government incrementally may not be sustainable moving forward.

Already, by taking a moderate stance, the WP has been dismissed by some opposition supporters as being "PAP-lite".

Political observer Eugene Tan from the Singapore Management University points out that sooner or later, voters will expect the WP to "challenge the PAP in a serious way".

And it must do so, if it has aspirations to grow beyond its token presence in Parliament, and form an alternative government.

Take for instance the Singapore Democratic Party (SDP), which makes no bones about its ambitions to form a government. The SDP has a policy unit and a much more comprehensive set of alternative policies published on its website.

Voters thinking of supporting the SDP, a political party with no parliamentary presence, will have no doubts on where the party stands on key issues.

In contrast, the WP appears reluctant to flesh out its policies and ideas in full outside of Parliament, preferring instead to discuss them piecemeal only when they happen to be on the parliamentary agenda - which is a reactive approach.

On the whole, the party seems overly wedded to its parliamentary role. While this means its MPs can criticise policies and raise questions in Parliament, it can also be argued that this is the WP's blind spot.

The party may have missed opportunities by adopting this Parliament-or-bust approach.

Take for instance the parliamentary debate on the constitutional changes to the elected presidency in November last year, when the WP was criticised by Deputy Prime Minister Teo Chee Hean for "(springing) upon the House" its proposal for the president's custodial powers to be vested in a popularly elected senate. 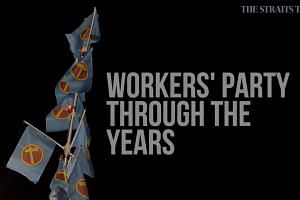 It chose to neither submit this proposal to a Constitutional Commission reviewing the matter earlier in the year, nor issue the proposal in public to generate support for its ideas in the months when society had started debating the issues. By the time it tabled it in Parliament, it was too late to make any meaningful impact.

If the WP had made its position public before taking it to Parliament, it would have given Singaporeans more time to mull over the proposal - instead of having to tune in and think through these complex issues in the much shorter timeframe of a parliamentary debate.

The WP's tiny presence in Parliament would have meant its proposal was likely to be a lost cause there to begin with, so why not advance it in the court of public opinion, one might ask.

Furthermore, even within its parliamentary role, it is notable that none of the party's MPs has ever tabled a Bill, something even individual Nominated MPs have done previously.

Policymaking is undoubtedly a difficult process, but the WP must start somewhere, if it wants to build up its policymaking chops over time.The party needs to provide alternative policies beyond the brief remarks in its manifesto, articulate this platform to voters, and persuade them that the WP has what it takes to govern Singapore.

This will take time and effort, since the party will also need to have its own internal debates among its leaders and cadres before going public on where it stands on key issues. However, Singaporeans who support the WP deserve no less.

A version of this article appeared in the print edition of The Sunday Times on October 29, 2017, with the headline 'It's time to be more than a check and balance'. Subscribe
Topics:
More
Whatsapp Linkedin FB Messenger Telegram Reddit WeChat Pinterest Print Purchase Article Copy permalink