SINGAPORE - Prime Minister Lee Hsien Loong said at last week's People's Action Party convention that raising taxes "is not a matter of whether, but a matter of when", setting off a week of heated debate and speculation over the impending tax hike.

The Government argues that the tax raise is necessary, given rising spending on infrastructure and social needs - especially as the population is ageing. Government spending more than doubled between 2007 and last year, from $33 billion to $71 billion.

The Ministry of Finance has also assured the public that all options will be studied carefully, and that the increase will be done with the "least impact on the less well-off and on Singapore's economy".

Insight this week examines the three burning questions over the rise in taxes, and looks back at other tax increases in history.

1. Is the Government spending wisely?

While many understand the need to spend more on social services, questions have still been raised about large spending items. One example is the $45 million Budget Terminal, which was used for just six years before it was torn down and recently rebuilt as Changi Airport Terminal 4.

Others - like Nominated MP Randolph Tan - called for policies to be means-tested, to achieve greater prudence. The Pioneer Generation Package, introduced in 2014 at a cost of $8 billion, for example, is given to everyone in that cohort - including the wealthiest.

Senior Minister of State for Finance and Law Indranee Rajah said in an interview with Insight that the package thanks the first generation of Singaporeans for their contributions, adding that it is "fitting that we recognise them".

As for the Budget Terminal, Ms Indranee Rajah said it was built when budget airlines were popular, and had to be changed "to keep up with current trends", as technology advanced.

Overall government spending is 18 per cent of GDP in Singapore, close to Hong Kong and lower than South Korea (21 per cent) and Switzerland (33 per cent).

Ms Indranee said that all government spending is approved only after many levels of internal checks, and is measured in terms of "the outcome and what that particular expenditure achieves".

2. Why can't we use more of the reserves?

Maybank Kim Eng economist Chua Hak Bin believes there is scope for this percentage to be increased.

Ms Indranee said the reserves maintain confidence in the Singapore dollar and act as a buffer in the event of a crisis. She added that it is a delicate balance to strike, and the Government has drawn the line at using 50 per cent of the projected returns.

Dr Chua contends that future generations will be better educated and better poised to take care of themselves, compared to the ageing baby boomers.

He adds that there are fundamental questions worth asking: "How much reserves do we really need, and is it really necessary to have such a big sum? Which generation are we saving for?"

Ms Indranee said that the Government is still working on the "when" of the tax increase.

Both PM Lee and Deputy Prime Minister Tharman Shanmugaratnam - who spoke on the matter in 2015 - have said there is enough money for the current term, which lasts till the end of the decade.

This has led to speculation that the announcement of the increase may be made at the next Budget, but take effect only after the next General Election.

In the meantime, the Government will have to try to persuade Singaporeans that the tax hike is needed, and what the money will be used for. Introducing the increase in this way will give retailers and businesses time to prepare for the change.

In a Facebook post, Workers' Party Assistant Secretary-General and Aljunied MP Pritam Singh linked the increase in taxes to the PAP's leadership transition, writing: "Raising taxes before a new PAP Prime Minister takes office would allow the new leader to start on a relatively 'clean slate', preserving his political capital," he said, noting that PM Lee has said he will hand over to the next PM after the next election, due by 2021.

If he is right, the announcement will happen sooner rather than later.

But Ms Indranee disagrees with Mr Singh's "underlying suggestion that it is being done for purely political purposes", and reiterates that taxes were being raised because of increased spending. 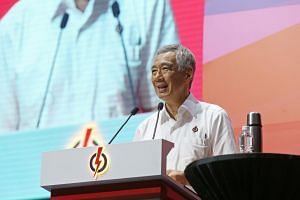