An alternative calculation of how much an incumbent managing agent would have charged Aljunied-Hougang Town Council (AHTC) compared with hiring a new one was put forth by defence lawyer Leslie Netto yesterday.

Defending AHTC's choice of FM Solutions & Services (FMSS) over CPG Facilities Management in 2011, Mr Netto argued that CPG would have cost more as several items - including the provision of lift rescue services in the day and support for an IT system - were absent in earlier estimates.

If these had been factored in, CPG would have charged close to $5.6 million compared with FMSS' $5.4 million for a year, said Mr Netto, who is representing FMSS and its owners - the late Mr Danny Loh and his wife How Weng Fan.

They are among eight defendants in a multimillion-dollar civil lawsuit over alleged improper payments the Workers' Party-run AHTC made to FMSS and its service provider from 2011 to 2015. The suit was initiated by AHTC under the direction of an independent panel.

AHTC's lawyer David Chan said last week that two of the defendants had advanced the interests of their supporters over those of residents when appointing FMSS. 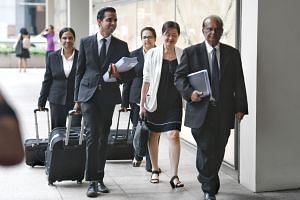 FMSS not given free rein over payments: WP lawyer

Mr Netto said items such as the annual cost of $451,200 for IT services for a town council management system and $17,820 for the provision of lift rescue services during office hours were left out in the calculation of CPG's fee.

These would have been provided by FMSS at no extra charge.

Mr Hawkes said that while the defendants were shown the calculations made in 2016, the items were not brought to the auditors' attention then.

Mr Netto noted that the FMSS contract also included taking over all the staff of WP-run Hougang Town Council in its merger with Aljunied Town Council. This cost $1.1 million for a year.

In comparison, KPMG calculated the additional costs of CPG taking over Hougang division at $687,660, based only on the number of units in the constituency, he said.

If CPG had taken over, it might have retrenched the Hougang Town Council staff - an outcome the WP MPs did not want to see happen, he said.

Mr Hawkes replied that while there was the possibility of job losses, which was "regrettable", KPMG's calculation was a cost calculation, not a social one.

Mr Netto also argued that signatures made by "conflicted persons" on payment vouchers - which auditors had taken issue with - were not approvals but endorsements to show the numbers were checked.

Any payment from AHTC to FMSS would have to be approved by Ms Lim, he said.