SINGAPORE - The Ministry of Health (MOH) has reached out to 2,400 of the 3,500 Singaporeans affected by the HIV registry data leak who are diagnosed with HIV and are still alive, Health Minister Gan Kim Yong told Parliament on Tuesday (Feb 12).

But the MOH was not able to reach everyone on the HIV registry, which dates back to 1985, as many had dated contact information, he said.

Of the 14,200 people whose personal information was leaked by American Mikhy Farrera Brochez on Jan 22, 8,800 were foreigners and the remaining 5,400 were Singaporeans and permanent residents. Of the affected Singaporeans, 3,500 are still alive.

Mr Gan said the MOH's medical social workers identified the patients who were likely to require more support so that designated officers could exercise extra care when calling them.

Counsellors were also on standby to speak to those affected if they were in distress or required more advice and support.

He noted that some affected individuals may prefer to discuss their concerns with those they are more familiar with, such as the medical social workers, nurses and doctors who have been supporting their ongoing care and treatment. 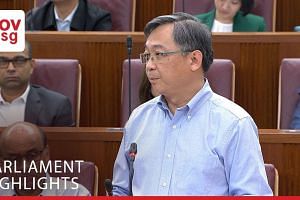 "We have arranged with the relevant public hospitals to have medical social workers and doctors on site to attend to them," said Mr Gan.

"Understandably, despite these efforts, some will continue to be concerned. Some may decline to return to care because of the fear of future disclosure. Some felt we should have just informed the affected individuals. A few wished they had not been called at all."

Mr Gan said medical social workers were themselves distressed by the news they had to break, and felt the anguish that the patients experienced when they were told.

He added that they had to conduct the calls carefully and gently and be alert to signs of distress so that they could help the patients appropriately.

The medical social workers have, at times, become the target of anger and blame, but still would do their best to support the affected persons, said Mr Gan.

"These reactions are not unexpected. They were the reasons we made a judgment call in 2016 not to make a public announcement, and in 2018 to inform only the affected patients," he added.

Several MPs asked how the MOH will help to destigmatise HIV following the leak.

They include Nominated MP Walter Theseira, who suggested changes to immigration and employment restrictions on foreigners with HIV.

Mr Gan said such policies are reviewed regularly, taking into account international practices and the concerns of Singaporeans. Some adjustments, such as lifting the restriction on people living with HIV coming here for short-term stays, have been taken over the years.

But he said the Government must be "very cautious" in approaching the issue as HIV remains "a very serious infectious disease". Restrictions on long-term stays remain in place.

He also said that while MOH will continue to work with organisations like Action for Aids to step up public education, stigma reduction, treatment and counselling, destigmatisation efforts have to be made across society.

"How each of us as individuals relate to persons with HIV also matters a lot. Here, I would like to appeal to Singaporeans to stand in support of these affected individuals and our efforts to fight the stigma against persons living with HIV."