SINGAPORE - In some countries, globalisation is viewed as a monster that wrests jobs from workers.

But in Singapore, Prime Minister Lee Hsien Loong sees it as a creator of jobs and booster of workers' wages.

In doing so, "we can have jobs in Singapore which are better paying for a wide range of our people," Mr Lee said in an interview with Australia's ABC Radio National on Saturday (June 10), the written transcript of which was released by the Prime Minister's Office.

The interview covered a range of issues, including the strategic power shifts in Asia, China's growing influence, the terrorism threat and how Singapore is preparing for the economy of the future.

While Mr Lee is confident that technology will generate jobs, "the question is what kind of jobs and will it be able to use the talents and meet the aspirations of our people?''.

Also, "can we prepare our people for the jobs which we think they should be capable of doing?"

He did not think the answer lies in having the money to do it.

One, the mindset that technology can make a big difference and a desire to make full use of it.

Two, there must be organisations that run efficiently, "not just automating your own way of doing things, you may have to restructure all together". 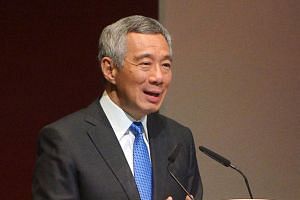 Three, the country must have people with "the ideas and technical know-how to make the projects happen".

This includes having the managers, leaders, promoters and people who may not be techies but "know what is snake oil and what is real'.

Mr Lee thinks Singapore is "some distance'' from such an environmentment and ethos, and getting there will require "a lot of work.

On the strategic shifts in Asia, he sees China's growth and influence in the region continuing to grow.

"We hope that this will be within an international framework where all countries can prosper, big and small, in a rules-based international order," he said.

"If that is the case, then it will be welcome and it will be positive.

"But it is quite hard to do because when you have a major shift in the strategic balance like this, it is easy to have anxieties, nervousness and pushbacks.

Mr Lee sees the Belt and Road initiative as a constructive way for China to integrate with other countries.

The Prime Minister said Singapore supports the Belt and Road initiative as well as the Asian Infrastructure Investment Bank, another China-led project to support infrastructure building in the Asia Pacific region.

India is also growing, he noted. "It is still not as vibrant or as big as China is as an economy, but it has tremendous potential because its population is younger."

Like Australia, Singapore is adjusting to the strategic shift, he said and added: "No country can be an island unto itself or world unto itself. Not even the biggest country."

Mr Lee believes the US will continue to play an important role in the security of the region. "That is something which many countries benefit from and support in their own varying ways."

The new US administration under President Donald Trump is "still defining a new direction for itself", he said.

"We should work with it and hope they will be able to work something out which will be in the long-term interests of the US and the region, which will mean is good for Singapore and I think will be good for Australia," he added.