The upcoming general election is not about family disputes, but about Singapore being at a very grave moment in its history, said Prime Minister Lee Hsien Loong yesterday.

Responding to a reporter's question on his brother Lee Hsien Yang joining the opposition Progress Singapore Party (PSP), PM Lee said it is "within his rights as a citizen" to join any political party.

But he stressed that "this GE is not about me or any family disputes which may involve my brother and me. It's about Singapore's future at a very grave moment in our history".

This came amid public speculation that he could join the ranks of the opposition party that was launched by former People's Action Party MP Tan Cheng Bock in August last year.

While he was not formally presented as a candidate for the July 10 election, he has been accompanying party colleagues on walkabouts and openly endorsing the opposition on social media.

PM Lee, 68, said at a virtual press conference to introduce candidates in Ang Mo Kio GRC - which he helms - that the Republic is facing the most serious crisis it has seen since independence in 1965, with major implications for Singaporeans' health, jobs and future.

"And I think we should focus our attention on those big issues," he said.

The Covid-19 pandemic has badly hit countries around the world. Singapore's economy is expected to shrink by up to 7 per cent this year, making it the worst recession since independence. 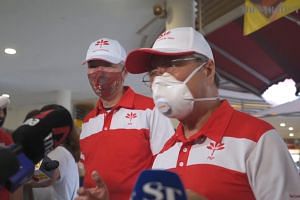 Total employment registered its sharpest-ever quarterly decline in the first quarter of this year.

The younger Mr Lee and his sister Lee Wei Ling have been embroiled in a public rift with PM Lee - the secretary-general of the ruling PAP - for several years over the fate of their late father Lee Kuan Yew's family home at 38 Oxley Road.