Chun Sing tells opposition: Come to Tanjong Pagar because you care about the residents

Opposition parties seeking to contest Tanjong Pagar GRC in the next election should not do so just because they want to put up a fight, Minister in the Prime Minister's Office Chan Chun Sing has said.

"It's the wrong starting point if people want to come here because they think it is a trophy GRC. That would do injustice to residents," he told reporters after a walkabout in Bukit Merah View yesterday. "Your hearts must be pure. You must be here because you want to take care of residents and improve their lives," he said. "If you are just here to win the election, that is quite sad and the residents can tell."

Mr Chan, an MP for Tanjong Pagar GRC, however said it was not the job of his team of MPs to focus on which opposition party was contesting the GRC. The constituency has special significance for the People's Action Party (PAP), as former prime minister Lee Kuan Yew, who died in March, was a lifelong MP in the Tanjong Pagar area and helmed the GRC since it was formed in 1991. It has not seen a contest since then, and was the only constituency uncontested in the 2011 General Election .

But two opposition parties, the Democratic Progressive Party and Singaporeans First, have recently said they are keen to field candidates in the next election. Both reiterated their interest to contest there after the release of the Electoral Boundaries Review Commit- tee's report last Friday.

Mr Chan said: "We can't control who is coming here. Our job is to put in the work every day, conscientiously. I would be sad if people saw (us) and said: 'Elections must be coming, that's why you are here.' "

His fellow GRC MP, Senior Minister of State for Education and Law Indranee Rajah, said that her team was prepared for an electoral fight.

"At every GE, we have not taken our situation for granted, even when (Mr) Lee was here," she said. 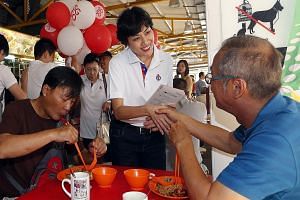 "Our stance has always been that we are prepared and, in so doing, we do not take our residents for granted, or the work we have done in the last term for granted either. It's all about what you can do for them going forward," she added.

But they could not say if Dr Neo, whose Kreta Ayer-Kim Seng ward will become part of Jalan Besar GRC, would remain on the Tanjong Pagar GRC team. That decision is for the PAP secretary-general, Prime Minister Lee Hsien Loong, to make, they said. Asked if she would like to stay on as an MP, Dr Neo, who entered politics in 1997, said: "I've been happy to serve (residents) and will always serve them."

If Dr Neo does stand in Jalan Besar GRC, this could mean a spot for one more candidate in the five-MP Tanjong Pagar GRC. As Tanjong Pagar GRC takes in some 60 per cent of Transport Minister Lui Tuck Yew's Moulmein ward, there is talk he could return to the GRC where he first stood. He was part of the Tanjong Pagar slate in GE 2006, before his ward was moved to Moulmein-Kallang GRC in GE 2011.

Moulmein-Kallang GRC will now be divided up among four GRCs.

A version of this article appeared in the print edition of The Straits Times on July 27, 2015, with the headline 'Don't contest 'just to put up a fight''. Subscribe
Topics:
More
Whatsapp Linkedin FB Messenger Telegram Reddit WeChat Pinterest Print Purchase Article Copy permalink