A brothel is not just where sexual services are provided, but one where they are offered, according to a proposed new definition under the Women's Charter.

The proposed change would make it easier for the authorities to tackle the problem of vice activities in residential estates.

Another proposed change will make people based outside Singapore liable if they facilitate the provision of sexual services through remote communication services, such as via websites or through instant messaging apps.

Maximum penalties for various offences under the Charter are also set to go up, with higher fines and longer jail terms.

These were among amendments to the Charter that were introduced in Parliament yesterday.

Currently, a brothel is defined as a place used by two or more women for prostitution. The new definition extends to cover any place that has been advertised - expressly or implicitly - as being used for prostitution.

Last week, the police said they arrested 106 women and a man during a month-long operation for suspected involvement in vice-related activities which took place in condominiums, hotels and residential units. 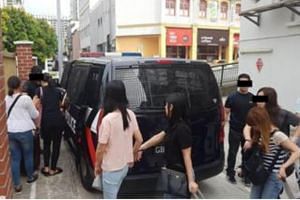 Residents should keep a lookout for vice in heartland: MPs

Chasing vice out of the HDB heartland

It is already an offence for any person to keep, manage or assist in the management of a brothel.

The amendments tabled in Parliament would also see penalties for various offences increased. For example, those who facilitate the provision of sexual services through remote communication methods would currently be fined no more than $3,000 and/or jailed for up to three years.

Similarly, those who sell women for prostitution may face a mandatory jail term of seven years, as well as a $100,000 fine. The current penalty is a five-year jail term and up to $10,000 fine.

The changes will be debated at the next Parliament sitting.

Besides the amendment to the Women's Charter, seven other Bills were introduced yesterday. They included changes to the Central Provident Fund to help self-employed people make regular contributions to their Medisave accounts, among other things.

A version of this article appeared in the print edition of The Straits Times on October 08, 2019, with the headline 'Definition of brothel being changed to fight vice in residential areas'. Subscribe
Topics:
More
Whatsapp Linkedin FB Messenger Telegram Reddit WeChat Pinterest Print Purchase Article Copy permalink