Under the law, it is the Government of the day that has to make a decision on the fate of founding prime minister Lee Kuan Yew's house in Oxley Road, said Deputy Prime Minister Teo Chee Hean.

For this reason, it is "incumbent on the Cabinet to consider and decide on the issues, and I have decided to set up a committee to assist Cabinet to do so", he said yesterday.

DPM Teo also said that "setting up a ministerial committee to study or work on issues is part of normal Cabinet working processes. Even boards of companies set up committees to look into specific issues."

His latest remarks on the four-member ministerial committee he heads were made in response to a commentary by editor-at-large Han Fook Kwang in The Straits Times yesterday.

The commentary, "Three key issues in the Lee v Lee saga", is on the dispute between Prime Minister Lee Hsien Loong and his two younger siblings over the fate of their late father's house. 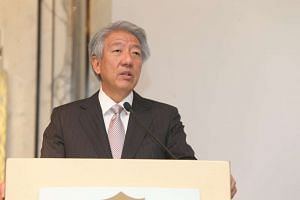 Dr Lee Wei Ling and Mr Lee Hsien Yang are joint executors and trustees of their father's estate and want the house demolished.

PM Lee has recused himself from government decisions on the property but had said before that personally, he would like his father's wishes to be honoured.

Mr Han suggested disbanding the ministerial committee and leaving the decision on the house to the Founders' Memorial Committee.

This committee was set up in 2015 to come up with the concept for a Founders' Memorial to honour the first generation of political leaders. They include Mr Lee and core members of his team, such as Dr Goh Keng Swee, Mr S. Rajaratnam and Mr Othman Wok.

In his statement, DPM Teo said the Government of the day is ultimately responsible for the decision on 38, Oxley Road.

"This is where the powers reside under the law, specifically the Preservation of Monuments Act and the Planning Act in this case."

"Mr Han himself acknowledges this," he added.

Mr Han, also a senior fellow at S. Rajaratnam School of International Studies, asked if it was wise or necessary for ministers to be involved in matters like Mr Lee's will. "Should they not have confined themselves to deciding only on what to do with the house - demolish, preserve or some intermediate option?"

DPM Teo replied that his committee's interest in the will is confined to trying to understand Mr Lee's thinking on the future of the house.

It is "an important factor which we would all want to take into account", he said.

Hence, the committee sought the views of PM Lee and his siblings.

It had to as the siblings "told us they had different views, and challenged each other's interpretations of Mr Lee's wishes", DPM Teo said.

All this was done through correspondence and out of the public eye until the matter was brought out into the open, DPM Teo said, referring to a six-page statement Dr Lee and Mr Lee Hsien Yang posted on their Facebook pages in the early hours of June 14.

The duo accused PM Lee of, among other things, abusing his power.

Specifically, they pointed to the formation of what they call a "secret committee" to challenge the demolition clause in Mr Lee's will.

PM Lee has refuted their allegations. He will deliver a ministerial statement on July 3 in Parliament on the dispute with his siblings.

DPM Teo stressed that the siblings' difference of views did not arise because of the ministerial committee. "We still hope that differences of views on private matters can be resolved within the family."

DPM Teo said: "But ultimately, the Cabinet of the day... cannot avoid taking responsibility for making the required decisions on matters where the public interest is involved, and due process is required.

"Mr Lee Kuan Yew himself understood this and would have expected the Government to do so."