Lawyer says candidates must declare they understand role before getting eligibility cert; not make 'grandiose promises'

A 49-year-old lawyer wants rules introduced for campaigning during the presidential election because the last polls were politicised to the point that unrealistic promises were made.

Mr Rey Foo proposed that before candidates are issued certificates of eligibility, they must make a declaration that they understand the role of the president.

Candidates must also not make what he called "grandiose promises" that are outside the scope of the presidency to fulfil, he said yesterday at the second public hearing of the Constitutional Commission to review the elected presidency.

But he did not cite any instance of politicising that he said occurred in the presidential polls in 2011, when four candidates contested and President Tony Tan Keng Yam won by a slim margin. 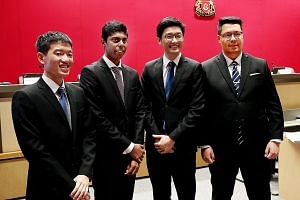 In making his suggestion, Mr Foo said: "The election process for the elected president should be of an entirely different flavour compared with the normal general election for Parliament seats.

"The style... in the past election was very similar to the political type of election. I don't think that should be the case."

All their concern in that office, apart from the critically important national symbolic and ceremonial roles, all they are able to do is to check, serve as a check and balance on the Government's powers in relation to finance, appointments...

And that's the crucial point you're making... that you have to recognise the distinction and therefore try to curb the electoral process so it doesn't unnecessarily fuel expectations that can't be met and doesn't give people a misunderstanding of the office of the presidency. That's really the critical point you're making.

CHIEF JUSTICE SUNDARESH MENON, summing up the reason underpinning lawyer Rey Foo's proposal that rules be introduced for campaigning during the presidential election.

To enforce the proposed rules for campaigning, a tribunal can be set up to look into complaints of breaches, he said. Candidates should be disqualified from running if they break the rules twice, he added.

Chief Justice Sundaresh Menon, who chairs the commission, said the tribunal's role would be similar to that of an election judge who looks into wrongdoing during parliamentary and presidential elections.

Mr Foo said it could be adapted from the existing institution.

But former Parliament Speaker Abdullah Tarmugi, a member of the commission, raised the issue of who should be allowed to report a possible infringement.

If members of the public could do so, the tribunal could be inundated by cases. But if only candidates could file complaints, the process could become a source of conflict among candidates seeking the office.

Mr Foo replied that a candidate who makes a false allegation would risk his reputation, but acknowledged that the procedure needs to be fine-tuned.

When asked if he felt Singaporeans were clear about the elected presidency, he said that based on his experience, people did not have a full understanding of the role, responsibilities and powers of the office.

Schools should teach the younger generation about it, he added.

CJ Menon noted that others at the first hearing had also emphasised the need for public education.

It was a point he raised again when a group of Singapore Management University law students gave their views on the six-man Council of Presidential Advisers (CPA).

They suggested the CPA's advice to the president be published with the presidential decision for reasons of transparency, adding that it would help people better understand the role of the office.

CJ Menon said that implicit in this suggestion was the need for greater education. "One of the points implicit about this thing is that there is a need for people in Singapore to have an appreciation not only in the role of the president, the nature of the functions he has, but as well with the CPA, what the CPA can and cannot do."

In an earlier exchange with the Eurasian Association's representatives, CJ Menon said members of the public tend to focus on the president's custodial role over the country's reserves.

But the president performs other important functions as well, such as approving key public service appointments, he said.