SINGAPORE - Singapore Democratic Party (SDP) chief Chee Soon Juan disagreed on Thursday (May 5) with the Ministry of Manpower (MOM) that he was painting "an alarmist picture of the job market for Singaporeans".

Citing the recent relocation of several offshore and marine companies such as Subsea 7 from Singapore to Kuala Lumpur, Dr Chee said that he believed retrenchment would outstrip the number of jobs created.

He added that economists concurred that the economic outlook was bleak, and said it was all the more important that his proposed retrenchment insurance be introduced to help workers who have lost their jobs.

Dr Chee had said at a rally on Tuesday that in all of last year, the Government had created only 100 jobs for citizens and permanent residents. "That means one job per constituency," he added. "How many of you here in Bukit Batok think you're going to fight for that one job if and when you're retrenched?"

The Manpower Ministry clarified on Wednesday that the increase mentioned by Dr Chee was not the total number of new jobs taken up by locals last year. The increase was actually the difference between the total number of locals taking up and leaving jobs, for example due to retirement. This difference - the "net" number of new jobs taken by locals - was 700 last year. 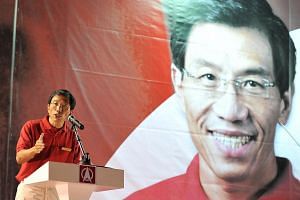 In January, MOM's initial estimates showed the net number of new jobs taken by locals went up by 100 at the end of 2015 compared to a year ago. The figure was updated in March to 700. This net figure does not reflect the total number of new jobs for locals. "Despite the slowdown in net local employment growth, most Singaporeans looking for jobs are able to find one," said the ministry, citing a March report.

Their ability to find jobs is why the unemployment rate of locals has stayed low, and why there are more job openings than job seekers.

"The basic reality is that our local workforce growth has slowed," it added, citing three factors: fewer younger workers entering workforce; more baby boomers leaving the workforce; and the fact that the employment rate of 80.5 per cent for locals aged 25 to 64 is already high and cannot grow much further.

Speaking to reporters after a morning walkabout in Bukit Batok, Dr Chee said the SDP's final rally will focus on convincing voters that the party "is more than capable" of managing the town council.

He emphasised that the SDP will not hire a managing agent, a move which he said will lead to cost savings that can be passed on to residents.

He added that he has been able to build up relationships in the estate after walking the ground for two months, and that he will maintain these friendships whatever the results of Saturday's (May 7) by-election.

When asked about his plans for Cooling-Off Day on Friday, Dr Chee said he would be spending the morning in bed recuperating from a hectic campaign period.

But there would still be work to do later in the day, such as training polling agents for Polling Day, he added.