SINGAPORE - The People's Action Party (PAP) candidate Murali Pillai on Saturday (May 7) repaid his party's faith in him by winning the Bukit Batok by-election.

Mr Murali defeated Singapore Democratic Party (SDP) chief Chee Soon Juan with 61.2 per cent of the vote share. This was a nearly 12 percentage point drop from the 2015 General Election when the PAP won 73 per cent in the single-seat ward.

Then again, political observers have pointed out that Mr Murali faced some challenges, including the 'by-election effect', the circumstances in which his predecessor David Ong quit (an alleged extramarital affair) and how he was a minority candidate.

What were some of the factors that could have tipped the scales in the 48-year-old lawyer's favour? We examine five possible reasons.

1. Tharman and the Jurong family

Don't underestimate the Tharman factor. Deputy Prime Minister Tharman Shanmugaratnam, anchor minister for the neighbouring Jurong GRC, delivered a forceful yet effective rebuttal to the SDP's "alarmist" and "populist" approach as the last speaker at the PAP's rally on Thursday (May 5). 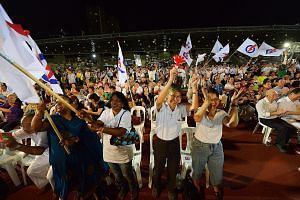 Tharman takes SDP to task for being 'alarmist and populist'

Mr Tharman first rubbished two claims by Dr Chee - that $800 billion had gone missing from the national reserves, and how only 100 jobs were created last year.

He then proceeded to decry populism - "promising the good things without saying how much it's going to cost" - by taking apart the SDP's healthcare proposals and calls for retrenchment insurance.

The PAP, particularly Mr Tharman and Mr Murali, have also repeatedly espoused the advantages of Bukit Batok remaining with the Jurong-Clementi Town Council, which Mr Murali said has the capability, resources and a good track record.

"A vote for us means a vote for certainty - there's no need to experiment,"  Mr Murali added.

A savvy use of social media,  a more mellow and measured approach, and keeping his family in the public eye have all contributed to a softening of Dr Chee's previous image as a belligerent activist.

But Prime Minister Lee Hsien Loong's public criticism of the SDP secretary-general could well have contributed to lingering doubts over a man sued for defamation and remembered for his falling out with former mentor and SDP founder Chiam See Tong in the 1990s. 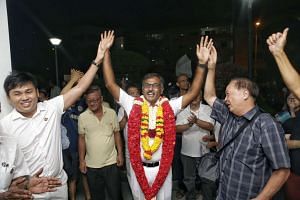 At the 2015 General Election, former PAP MP David Ong secured a commanding 73 per cent of the vote share against the SDP's Sadasivam Veriyah (26.4) and independent candidate Samir Salim Neji (0.6). Dr Chee would have required a vote swing in excess of 20 percentage points to defeat Mr Murali.

But unlike the 2013 Punggol East by-election which saw unresolved national issues, stalled upgrading works in the ward and criticism of the PAP parachuting in its candidate ultimately undermine the ruling party's campaign, there were no such "hot button" issues for the opposition to leverage on in Bukit Batok.

The momentum was also arguably with the PAP, just eight months after it secured a strong mandate of 69.9 per cent as it rode a wave of positive sentiment. 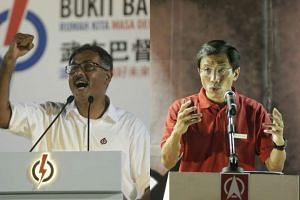 Unlike the younger and possibly more liberal voters in Punggol East, over 30 per cent of Bukit Batok residents are above 50 years. A good 70.8 per cent of public housing also consist of three- or four-room flats.

Political watchers had suggested that residents might need more time to hear from Dr Chee, who is trying to shake off the image of a combative politician who was previously sued for defamation.

Singapore Management University (SMU) law don Eugene Tan had noted then: "I don't think voters here are going to make too much of Dr Chee being a long-time politician. Voters
will scrutinise the candidates on who they are, what they represent and what sort of confidence they inspire."

5. The PAP's track record in the West 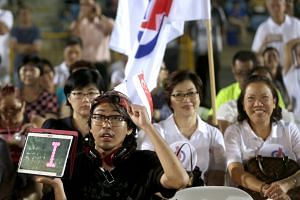 PAP: Murali's advantage is he's back on familiar ground

Unlike certain areas in the east and north-east of Singapore, the western region has traditionally been a PAP stronghold. Add to that how Mr Tharman is a popular figure in Jurong and the surrounding area, and it is not hard to see why the opposition have struggled to gain a foothold in recent times.

Mr Murali, a familiar figure in Bukit Batok after 16 years as a grassroots activist, had constantly played up the Jurong-Clementi Town Council factor and how the PAP had helped
to set up several social programmes in the ward over the past 40 years.

Unveiling a $1.9 million upgrading plan for a neighbourhood in need of renewal at the start of his campaign could also have possibly swayed voters.