SINGAPORE - Asean will continue to support efforts to secure the complete, verifiable, and irreversible denuclearisation of the Korean peninsula in a peaceful manner, said Prime Minister Lee Hsien Loong.

Speaking a day after the historic summit which saw North and South Korea pledge to end their decades-long conflict, PM Lee told reporters at a press conference that Asean welcomes recent developments on the peninsula.

He cited the positive steps taken, from Friday's Inter-Korean Summit to North Korean leader Kim Jong Un's earlier visit to China in March as well as the plan for American President Donald Trump and Mr Kim to meet in the near future.

"The Inter-Korean Summit supports steps to decrease tensions and improve inter-Korean relations, and it will contribute to peace and stability on the Korean Peninsula and in the region," said PM Lee on Saturday (April 28) after regional leaders met at the 32nd Asean Summit hosted by Singapore, which is chairing the grouping this year.

At the meeting, Asean's leaders also discussed the humanitarian crisis in Myanmar's Rakhine state and the security situation in the South China Sea.

Myanmar briefed its fellow Asean members on the situation in the Rakhine, said PM Lee, who added that the situation is of concern to all Asean countries.

Outlining Asean's response to the exodus of more than 700,000 Rohingya Muslims from the Rakhine state following a military crackdown, PM Lee said the Asean Coordinating Centre for Humanitarian Assistance on Disaster Management is delivering assistance "to all the affected communities in Rakhine state".

Asean encourages Myanmar and Bangladesh to press on with their shared commitment to carry out the voluntary return of displaced persons in a "safe, secure and dignified way without undue delay", he said.

"Asean stands ready to support efforts by all parties to work towards a long-term viable solution so that affected communities can rebuild their lives," he added.

As for the disputed waters of the South China Sea, PM Lee said the situation was "relatively calmer this past year". 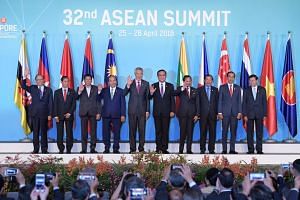 He noted the progress made on the implementation of practical measures under the Declaration on the Conduct of Parties in the South China Sea, which he said had helped build trust and prevent miscalculations on the ground.

He also welcomed the start of negotiations on the Code of Conduct (COC) in the South China Sea last month, and "looked forward to the early conclusion of an effective COC".

The leaders also agreed to work intensively towards an early conclusion this year of the Regional Comprehensive Economic Partnership, a trade pact led by the 10 Asean members and involving six of its trading partners: Australia, China, India, Japan, South Korea, and New Zealand.

Giving an overview of what Asean's leaders had achieved in their past two days of meetings in Singapore, PM Lee said: "Overall, I'm pleased that we have completed a promising and productive first lap in Singapore's Asean chairmanship."

He noted that they had adopted a statement on their vision for a resilient and innovative Asean, agreed to set up an Asean smart cities network, and vowed to cooperate on cybersecurity.

They also finalised the model Asean extradition treaty at the working level in March, he announced.

"Looking forward to completing and commencing work on an actual Asean extradition treaty as a next step," he said.

The leaders will meet again at the year-end Asean Summit, which traditionally involves external powers such as the United States, China and India.