SYDNEY - Asean does not see the world in black and white and does business with all the major powers in the world, Prime Minister Lee Hsien Loong said on Friday (March 16).

Mr Lee made these remarks at a joint press conference with Australian Prime Minister Malcolm Turnbull on the sidelines of the 3rd Singapore-Australia Leaders' Summit, where he was asked by Australian media whether China was dividing Asean.

There is a shift in the global strategic balance, as Chinese influence and interest in the region are growing with its economy, and there is a range of different perspectives and responses to this shift among the different Asean countries, he noted.

This is not surprising, because each Asean country has its own interests and sees the world differently, he said.

"If you're a landlocked state on China's borders, you see the world differently from an archipelagic state which is further away and which does business not only with one major partner but with many different partners."

This is the reality of the way the world is, particularly in an association of sovereign countries, Mr Lee added.

"It is normal, and therefore, I would not accept your framing of the question. I think these are issues Asean has to deal with and we'll have to do our best to manage all these tensions and these pressures."

Mr Lee is in Sydney until Sunday to attend the bilateral summit and an Asean-Australia special summit.

Ahead of the summit, Indonesian President Joko Widodo gave his endorsement of Australia joining Asean, saying he thought it was a good idea.

When asked about it on Friday, Mr Turnbull said that Australia is "really honoured and touched by the warmth of these remarks", but added: "Asean matters are a matter for Asean."

"We have the greatest of respect for Asean, the way it reaches its own conclusions. We are a dialogue partner with Asean and we work closely with Asean and we respect the centrality of Asean and its significance and fundamental central importance in our region." 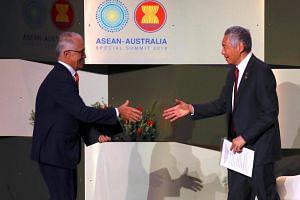 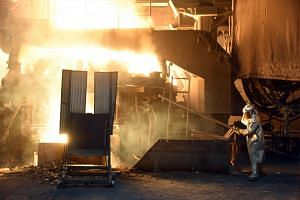 Mr Turnbull reiterated the message when he was asked whether and how he will raise human rights issues with Asean leaders this weekend, such as the military crackdown in Myanmar's Rakhine state.

Leaders at the special summit will be discussing "issues of every description", including human rights and the crisis in the Rakhine state, he added.

One way to do this, Mr Lee said, is by getting Australia involved in the Smart City network that Singapore is spearheading across Asean.

We are looking to build smart cities in Singapore as well as a network of smart cities in Asean countries because many cities are going in that direction," he said, noting that e-commerce, cashless payments and other cutting-edge technologies are being rapidly deployed across the region.

"And I think many Australian cities now are progressing in these areas too, and we can link them in this network. That's one way which Australia can integrate into the region."

Bilateral ties between Singapore and Australia have also deepened and broadened over the years and both are looking for more ways to boost cooperation, the leaders said.

Singapore in particular is keen to update its Avoidance of Double Taxation Agreement with Australia to catalyse trade and investment flows between both sides, Prime Minister Lee said.

Prime Minister @leehsienloong and Minister @VivianBala are in Australia for the 3rd Singapore-Australia Leaders' Summit.

Here are some key features of the Comprehensive Strategic Partnership Singapore shares with with Australia. pic.twitter.com/Wo9I3AkA9G

Singapore would also like to conclude an Open Skies Agreement, which will enable airlines of both countries to serve travellers better, increasing interactions and opportunities to work together

"We hope to discuss these issues with our Australian counterparts and make progress on them," he said.