A well-known academic from the Lee Kuan Yew School of Public Policy (LKYSPP) had his permanent residency cancelled yesterday and will be expelled for working with a foreign government to influence Singapore's foreign policy and public opinion.

The Ministry of Home Affairs (MHA) said Dr Huang Jing, 60, and his wife, Ms Shirley Yang Xiuping, will be permanently banned from Singapore, in what is the first publicly known case of its kind in nearly 20 years.

It said in a statement that Dr Huang has been identified as "an agent of influence of a foreign country" who worked with intelligence organisations and agents from that country, which it did not name.

Dr Huang was director of the Centre on Asia and Globalisation and Lee Foundation Professor on US-China relations at the LKY School, and his views on China and foreign policy issues were regularly sought by organisations and the media. Besides writing for Singapore newspapers, he also contributed articles to China's Global Times, a newspaper closely linked to the country's government.

He and his wife were born in China and are now US citizens.

"Huang used his senior position in the LKY School to deliberately and covertly advance the agenda of a foreign country at Singapore's expense. He did this in collaboration with foreign intelligence agents," said the ministry. "This amounts to subversion and foreign interference in Singapore's domestic politics. Huang's continued presence in Singapore, and that of his wife, are therefore undesirable." 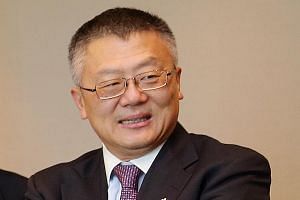 When agents of influence seek to shape public opinion

The Controller of Immigration has cancelled their entry and re- entry permits, MHA said.

It noted Ms Yang was aware of her husband using his position to advance a foreign country's agenda.

Dr Huang had engaged prominent and influential Singaporeans, providing them with what he claimed was "privileged information" about the foreign country to influence their opinions in favour of that country, the ministry said.

He also recruited others to aid his operations, it added.

"The clear intention was to use the information to cause the Singapore Government to change its foreign policy."

The Government, however, declined to act on the information.

When asked, the ministry declined to name the country or senior LKY School official.

It said Dr Huang and his wife can appeal to the Home Affairs Minister under Section 14(6) of the Immigration Act. They will have to leave Singapore within a grace period if their appeals are unsuccessful.

The LKY School is part of the National University of Singapore, whose spokesman yesterday said the matter is of serious concern, and Dr Huang has been suspended without pay with immediate effect. She said he can no longer work here as his permits have been cancelled.

Dr Huang told the South China Morning Post he had been notified by the Government, but said: "It is nonsense to identify me as 'an agent of influence' for a foreign country. And why didn't they identify which foreign country they are referring to? Is it the US or China?"

He said he would seek help from his lawyer and the US Embassy here, adding that he had not been given a deadline to leave.

Elaborating later, Dr Huang said he was asked to go to the Immigration and Checkpoints Authority at 11am yesterday, where he was told he had seven days to appeal to MHA.

He added that he was having dinner at Grand Shanghai Restaurant in Havelock Road with his wife and a friend when someone called her to say that information about their expulsion had gone public.