To me, Rev Yap represented a different way to be a man of faith. His faith was not lived within the church only; but out in the streets.

This week, another member of Singapore's Pioneer Generation died and with his departure went a way of life of one who was a witness to the suffering and the marginalised.

Reverend Yap Kim Hao died of heart failure, aged 88, on Thursday (Nov 16). He had reached the acme of Christian ministry as the first Asian bishop of the Methodist Church in Singapore from 1968 to 1973.

In his later years, and at the time of his death, he became better known as the pastor of a gay-affirming church.

I had first read about Rev Yap in a newspaper article about the Free Community Church.

At that time, I assumed that any Christian pastor associated with a gay-affirming church must be young and from a non-denominational church. It was only much later that I learnt he had been a Methodist bishop, and was already retired from active ministry when he became a pastoral advisor to the church.

I got to know him via email and on Facebook when he wrote to me, responding to a commentary I had written in which I had mentioned how my own view of God had changed from that of a distant, punitive God, to one who is immanent and suffers alongside us.

We began a casual, and enriching correspondence.

He sent me encouraging e-mails when I wrote commentaries questioning Establishment practices towards the marginalised. He shared his views on theology, on God, on homosexuality.

We had lunch a couple of times; the last time was with him and his wife in their apartment. He was frail, walking with a cane, but his mind was sharp as tack. 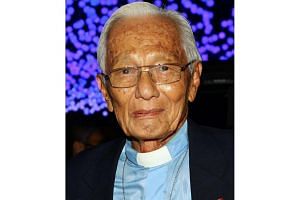 He told me the story of his limp: how he had been attacked and beaten up randomly by Japanese officers during the Second World War, and suffered several bouts of crippling paralysis and surgeries through the decades.

A bad leg and weak lower back prevailed all his life thereafter.

To me, Rev Yap represented a different way to be a man of faith. His faith was not lived within the church only; but out in the streets.

Social justice was his mantra and he shared with me how one particular sermon had resonated with him for years:"Among all the sermons that I listened to in school and church in my youth, I can rememeber vividly one particular one. It was based on the Book of the Minor Prophet Amos when he condemned and preached against the rulers of the countries around for their corruption and persecution of the people. In it I heard the stirring call: "But let justice roll down like waters and righteousness like an everflowing stream." "

A colleague gave him a Chinese calligraphic scroll with the words of the verse in Chinese; and this scroll hung in his office for years.

His social conscience was seeded when he studied in the United States through its civil rights years, when he supported himself through his studies as a garbage collector, dishwasher and gardener.

In addition to his pastoral work as a Methodist minister, in Singapore, he also helped convene an interfaith network on Aids and chaired a trust which worked with NGOs supporting the marginalised, including migrant workers and sex workers.

For him, working with the homosexual community after he retired from full-time service was a natural extension of his calling to journey spiritually with the marginalised.

His work with the gay church was not without controversy, as mainstream Christian teachings emphasise that homosexuality is a sin.

Rev Yap believed that being gay was not a choice but a condition people are born into.

The secular world and even the way of some churches that preach a prosperity gospel, is to aim for upward mobility. We strive for more - more wealth, more status, more glory. Rev Yap's life was a study in downward mobility - after being a Methodist bishop, he moved on to pastor those ostracised by mainstream churches. Some would say such a movement of the decending way, is a reflection of true gospel values.

His compassion and work for the marginalised was appreciated, as reflected in comments on his Facebook page, where his daughter had posted a note about his death.

One commenter said: "He stood up for what others shunned."

Another commenter: "The voice is silent, yet the voice is loud and clear: Live authentically, inclusively and trustingly -- A man who lived what he preached!"

And finally, this: "Your beloved dad was a great friend of the marginalised, a courageous voice who spoke against injustice,and taught us how to love. The internet community has lost their pastor, the Methodist Church has lost her prophetic voice, and I have lost a very dear friend and mentor. May he rest in peace."

Rev Yap's funeral wake is from Saturday to Monday at the Mount Vernon Sanctuary. The cremation is on Tuesday. For more details, please see his Facebook page.