At the World Economic Forum in Davos, Chinese President Xi Jinping delivered a speech that defended globalisation and called for equality among nations. Here is a transcript of his remarks.

The most pressing task before us is to steer the global economy out of difficulty. The global economy has remained sluggish for quite some time. The gap between the poor and the rich and between the South and the North is widening. The root cause is that critical issues in the economic sphere have not been effectively addressed.

Dr. (Klaus) Schwab has observed in his book The Fourth Industrial Revolution that this round of industrial revolution will produce extensive and far-reaching impacts such as growing inequality, particularly the possible widening gap between return on capital and return on labor. The richest 1 percent of the world's population own more wealth than the remaining 99 percent. Inequality in income distribution and uneven development space are worrying. Over 700 million people in the world are still living in extreme poverty. For many families, to have warm houses, enough food and secure jobs is still a distant dream. This is the biggest challenge facing the world today. It is also what is behind the social turmoil in some countries.

All this shows that there are indeed problems with world economic growth, governance and development models, and they must be resolved. The founder of the Red Cross Henry Dunant once said, "Our real enemy is not the neighboring country; it is hunger, poverty, ignorance, superstition and prejudice."

Countries, big or small, strong or weak, rich or poor, are all equal members of the international community. As such, they are entitled to participate in decision-making, enjoy rights and fulfill obligations on an equal basis.

First, we should develop a dynamic, innovation-driven growth model. The fundamental issue plaguing the global economy is the lack of driving force for growth.Innovation is the primary force guiding development. Unlike the previous industrial revolutions, the fourth industrial revolution is unfolding at an exponential rather than linear pace. We need to relentlessly pursue innovation. Only with the courage to innovate and reform can we remove bottlenecks blocking global growth and development.

With this in mind, G-20 leaders reached an important consensus at the Hangzhou Summit, which is to take innovation as a key driver and foster new driving force of growth for both individual countries and the global economy. We should develop a new development philosophy and rise above the debate about whether there should be more fiscal stimulus or more monetary easing. We should adopt a multipronged approach to address both the symptoms and the underlying problems. We should adopt new policy instruments and advance structural reform to create more space for growth and sustain its momentum. We should develop new growth models and seize opportunities presented by the new round of industrial revolution and digital economy. We should meet the challenges of climate change and aging population.

We should address the negative impact of IT application and automation on jobs. When cultivating new industries and new forms models of business models, we should create new jobs and restore confidence and hope to our peoples. 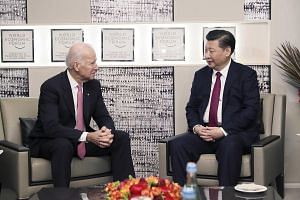 At Davos, a clarion call by world leaders, including Xi Jinping and Joe Biden, to defend global order 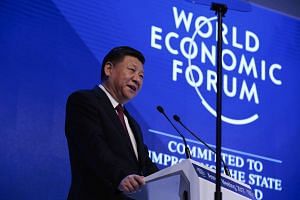 Second, we should pursue a well-coordinated and inter-connected approach to develop a model of open and win-win cooperation.

Today, mankind has become a close-knit community of shared future. Countries have extensive converging interests and are mutually dependent. All countries enjoy the right to development. At the same time, they should view their own interests in a broader context and refrain from pursuing them at the expense of others.

We should commit ourselves to growing an open global economy to share opportunities and interests through opening-up and achieve win-win outcomes. One should not just retreat to the harbour when encountering a storm, for this will never get us to the other shore of the ocean.

Pursuing protectionism is like locking oneself in a dark room. While wind and rain may be kept outside, that dark room will also block light and air. No one will emerge as a winner in a trade war.

Third, we should develop a model of fair and equitable governance in keeping with the trend of the times. As the Chinese saying goes, people with petty shrewdness attend to trivial matters, while people with vision attend to governance of institutions.

Countries, big or small, strong or weak, rich or poor, are all equal members of the international community. As such, they are entitled to participate in decision-making, enjoy rights and fulfill obligations on an equal basis.

Emerging markets and developing countries deserve greater representation and voice. The 2010 IMF quota reform has entered into force, and its momentum should be sustained. We should adhere to multilateralism to uphold the authority and efficacy of multilateral institutions. We should honour promises and abide by rules. One should not select or bend rules as he sees fit.

The Paris Agreement is a hard-won achievement which is in keeping with the underlying trend of global development. All signatories should stick to it instead of walking away from it as this is a responsibility we must assume for future generations.

Fourth, we should develop a balanced, equitable and inclusive development model. As the Chinese saying goes, "A just cause should be pursued for common good." Development is ultimately for the people. To achieve more balanced development and ensure that the people have equal access to opportunities and share in the benefits of development, it is crucial to have a sound development philosophy and model and make development equitable, effective and balanced.

We should foster a culture that values diligence, frugality and enterprise and respects the fruits of hard work of all.

Priority should be given to addressing poverty, unemployment, the widening income gap and the concerns of the disadvantaged to promote social equity and justice.

It is important to protect the environment while pursuing economic and social progress so as to achieve harmony between man and nature and between man and society. The 2030 Agenda for Sustainable Development should be implemented to realise balanced development across the world.

As long as we keep to the goal of building a community of shared future for mankind and work hand in hand to fulfill our responsibilities and overcome difficulties, we will be able to create a better world and deliver better lives for our peoples.