This is the class that now decides elections in the West and it may elect a populist as president of France.

LONDON • "This is not the apocalypse," US President Barack Obama told his shell-shocked White House advisers once it became clear that, contrary to everyone's expectations, Mr Donald Trump had won the presidential election.

Perhaps Mr Obama is right; the United States still stands, and it will hopefully continue to do so. But that's about the only consolation for the current US President and his supporters, since by almost any other yardstick, Mr Trump's victory represents a defeat of catastrophic proportions for Mr Obama's Democratic Party. The party of Roosevelt and Kennedy is now at its weakest point since, yes, Roosevelt and Kennedy.

And the disaster which has befallen America's Democrats is also being inflicted on most other mainstream centre-left political parties throughout the Western industrialised world. Almost everywhere, working-class voters feeling themselves endangered by the forces of economic globalisation and infuriated by rising wealth inequalities are now the key decision-makers in elections. But almost everywhere, socialist and centre-left parties which were established precisely in order to represent these working classes are being shunned by what used to be their natural voters.

Explaining this curious phenomenon is an essential element in understanding the forces which brought Mr Trump to power in America, or pulled Britain out of the European Union. And that's not just an academic exercise, for centre-left parties in the West will remain in the doldrums unless they find a way of re-engaging with the electorate. They will need to reinvent themselves.

It is easy to remain fixated on the race for the White House, one of the most bitterly-fought and unpleasant showdowns in America's modern political history, and one which had such an unexpected ending. But that was just the culmination of a much darker drama which unfolded in slow motion in countless US national elections over the past eight years of the Obama presidency, and all of which spell doom for the Democrats.

When Mr Obama came to power in early 2009, his Democrats controlled 62 of America's 99 various state legislative chambers; today, it is Mr Trump's Republicans who are in control of 71 of them, as well as both chambers of Congress in Washington.

When Mr Obama's "Audacity of Hope" electoral slogan was on everyone's lips, Democratic governors were in charge of 31 of America's states; today, they cling to only 17, and in only six of these do Democrats hold all power, compared with 25 for Republicans.

It is now possible to travel the entire breadth of the US, a distance of 5,800km from the southern tip of Florida to the US border with Canada's province of British Columbia on the Pacific coast, without ever leaving land under Republican control.

In effect, Mrs Hillary Clinton's defeat was not due to some badly handled emails, an unfortunate Federal Bureau of Investigation probe, a right-wing conspiracy or just bad luck; it was the culmination of a process of attrition which pulverised the Democratic Party's electoral base.

Germany's Socialists have lost three elections in a row since 2005, and are guaranteed to lose next year's general election as well, since they currently command the loyalty of only one in five voters. Meanwhile, centre-left historic parties of Italy and Greece have disappeared, while the Socialist party of Spain, one of Europe's oldest and proudest, has lost two general elections over the past 12 months alone in a country where 19 per cent of all workers are unemployed, and no less than 40 per cent of the young have no job.

In short, the failure of centre-left parties is a global phenomenon, rather than a US speciality.

The key explanation for this spectacular failure is that such parties long ago lost any contact with working-class people. They are largely controlled by a variety of unrepresentative city-dwellers and single-interest coalitions and operate in major cities where the politics of group identity matter more than the concerns of the poorly paid on whose behalf they still claim to speak.

The result is parties which are obsessed with questions of little or no relevance to mainstream working-class people. Mrs Clinton, for instance, had strong views on same-sex marriages or the constitutionality of gender-free toilets, but she articulated her policy on free trade only as an afterthought, and only after Mr Trump forced her into making a statement.

At every electoral rally, she spoke about the plight of Latinos, gays, women, black Americans or any other group, but seldom about the biggest single group of all: that of white unskilled or semi-skilled American workers. 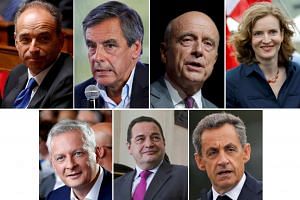 The same is happening in Britain, where the Labour Party waxes lyrical about the need to protect the country's rainbow coalition of ethnic minorities, but has absolutely nothing to say about the latest statistics which indicate that white working-class boys in British schools lag behind every other category of children and are three to five times less likely to do well in exams than the children of even the poorest ethnic Chinese families in the UK.

And the same is happening in Germany, where instead of engaging with working-class voters concerned about high levels of immigration, Mr Sigmar Gabriel, the Vice-Chancellor and Socialist leader, simply pulled up a finger in an obscene gesture to anti-immigration demonstrators who recently confronted him.

What would otherwise be considered the behaviour of a hooligan was hailed by left-wingers in Germany as some profound political statement. Nobody stopped to think how this would be perceived by ordinary Germans who struggle to pay rent on their homes only to see a million refugees arrive in one year and benefit from free housing.

Centre-left parties in Europe and America appear to have forgotten that, as unfashionable as that fact may be, white working-class people still amount to a majority of their voters, and they don't take kindly to being treated as either too stupid to understand what's good for them, or too bigoted to be even talked to.

Mr Trump grasped this, and became US president. Ms Marine Le Pen, leader of France's populist National Front, also got this message, and she may well become the French president next May.

But the people who still claim to speak for the working class remain in a state of denial. They prefer to laugh at Mr Trump's hair and speech pattern rather than address his policies. Notwithstanding their crushing defeat, Democratic leaders in the US continue to claim that Mrs Clinton won a plurality of votes at the presidential ballot, that the Democrats still have the backing of young people, and that all that happened is that America experienced a "whitelash", an outburst of anger from white voters.

Yet all of this amounts to a dangerous delusion. For although it's true that the US Democrats still have many supporters, these are largely concentrated in a few states on the Pacific and Atlantic coasts, and are not enough to win federal elections. Young supporters also get old, and when they do, they tend to vote Republican, so the claim that the future belongs to Democrats is nonsense.

And the explanation that the move away from mainstream centre-left parties is due to some "whitelash" merely allows complacent politicians to blame everything on race, and to portray the current developments as just a transitory phenomenon.

But they are not; they are part of a much more powerful juggernaut now transforming politics throughout the Western world - away from open borders and free trade, and towards tight border controls, inward-looking economies and rampant nationalism.

Socialist and centre-left parties used to act as the biggest bulwark against such trends. Now, however, they run the risk of being pulverised by this electoral steamroller, which only benefits populist leaders like Mr Trump.

So, although the apocalypse is not upon us, the world as we know it may well be ending. And those who spent over a century trying to persuade electorates that they had a recipe for a better world are now in danger of being swept away first.