Doubts over sincerity of V-P candidate, given his well-known conservative leanings

For years, senior Islamic cleric Ma'ruf Amin has been one of the architects behind controversial religious rulings in Indonesia that critics say have oppressed minorities, but since he was unveiled as incumbent Joko Widodo's running mate in the upcoming presidential polls, Dr Ma'ruf seems to have started singing a different tune.

But this year, he expressed regret for his role, saying he was forced to take the stand as he had signed the MUI's statement declaring that Mr Basuki's remarks constituted religious defamation.

Dr Ma'ruf has also recently been pushing a moderate brand of Wasatiyyah or "middle way" Islam, placing democracy and pluralism at the core of Indonesian Islam. And he surprised many when he delivered a rare Christmas greeting - something he previously declined to do.

Asked in 2012 whether he would wish Christians "Merry Christmas" - an issue that has divided the Muslim community, even though there is no fatwa in Indonesia forbidding such greetings - Dr Ma'ruf said: "The issue is debated (so) it's better not to say it." He had said the same thing in 2016.

Whether the Dr Ma'ruf from the campaign trail sticks around after the April 17 polls will have important implications for Indonesia, should he and Mr Jokowi emerge victors, especially with the country grappling with the increasing sway of hardline Islamic groups.

IseaS-Yusof Ishak Institute fellow Norshahril Saat cautions that although Dr Ma'ruf's comments on Islamic matters may now contain progressive overtones, they should not be taken at face value.

"There is a consistent, core Islamic belief that resonates with (him)," he wrote in a paper on Monday. He added: "It is only a matter of time before (his) past, especially the fatwas he endorsed in MUI, haunts Jokowi's drive to present himself as a national and progressive Islamic leader."

In Dr Ma'ruf's time as head of MUI's fatwa committee, the council issued a slew of rulings prohibiting, among other things, inter-faith prayer, inter-faith marriage, as well as pluralism, liberalism and secularism - ideas it said went against Islamic teachings. Dr Ma'ruf has also lobbied legislators to pressure the government to conform to his Islamic agenda.

His past actions seem at odds with Mr Joko, who has long stressed religious tolerance. 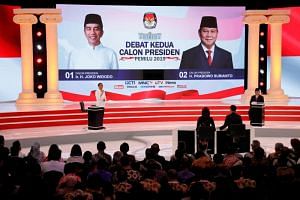 It remains to be seen whether the measured moderation Dr Ma'ruf is displaying now will last, or whether it is just for show in the tight presidential race.

Dr Norshahril pointed out in his paper that although Dr Ma'ruf had downplayed his conservative beliefs in a speech on "middle way" Islam last October, he mentioned that he considered liberals, secularists and pluralists as "leftists" for promoting religious freedom, as opposed to radicals, who were "rightists".

This was consistent with the 2005 MUI fatwa against liberalism, pluralism and secularism, Dr Norshahril wrote, adding: "In a way, (Dr) Ma'ruf has not changed his position, though his speeches now, interspersed with terms such as Islam Wasatiyyah, may earn him labels such as 'moderate' or 'centrist'."

Researcher Azis Anwar Fachrudin from Gadjah Mada University's Centre for Religious and Cross-Cultural Studies, Yogyakarta, noted that other than softening his tone and being more careful with words, "no changes have been seen" in Dr Ma'ruf's views.

"Only when he speaks more precisely about his views on those religious groups he has declared heretical and deviant will we be able to tell whether he has undertaken a significant change towards moderation," he wrote in a commentary for the Jakarta Post.

Dr Norshahril wrote that with Dr Ma'ruf's history, the Muslim community might expect him to use the vice-presidency to "pursue his unfinished business" in MUI, which includes the Islamisation of society, such as by Islamising capitalist practices.

The cleric - who has been involved in protests over the plight of Palestinians - may even push for a foreign policy inclined towards the interests of Muslims and those sympathetic to Muslims.

Will Dr Ma'ruf's conservative leanings prevail if he takes on the role of vice-president?

Or will he be a true partner for Mr Joko, using his mantle as one of the country's most influential Islamic figures to push for moderation and greater tolerance in a country where the hardliners' calls for exclusivism have been gaining ground?

"Whatever agenda Ma'ruf has in mind, he will have to contend with the checks and balances afforded by, and broad diversity of, Indonesian society," wrote Dr Norshahril.