"I have no new clothes for Chinese New Year," I said in the lead up to this weekend's festivities. My mother stared at me. "Well, that can't be the case. You got so many clothes last year."

This is true. The clothes are becoming a problem. They no longer fit in the wardrobe, and now compete for room space with my towers of books. And yet, none of them has been new for some time.

It is a Chinese New Year custom to go out bedecked in a brand new outfit, but in the past year, everything I acquired was vintage, thrifted or a hand-me-down.

It started many years ago with my mother giving me her work clothes. She was no longer working in an office, whereas I had just landed my first internship. Then my sister declared that she would no longer wear colours, only dark shades. Overnight, all the colours moved to my wardrobe too.

Then my friends began giving me their old clothes. "This doesn't fit me any more," they would say. Or: "We're getting the keys to our flat and there's no room for all my old stuff." Or: "I don't know what I was thinking when I bought it but here, you give it a go."

My days as a repository for other people's unwanted clothes reached their zenith when my friend threw a clothes swop party last year, to which guests were invited to bring clothes they no longer wore regularly and trade them over tea and cookies. That way, the clothes could find new, loving homes, while the surplus would be donated to the thrift shop of the Singapore Council of Women's Organisations.

I wondered what Sokiri's life had been like, if that was indeed her name: this wasp-waisted Japanese woman from the 1950s who sewed her dresses by hand and painstakingly finished her seams with pinking shears. Each piece of clothing was like an archaeological site for someone's story, each stitch another clue to unearth.

It started as a civilised tea party and descended into madness. The house morphed into an extended dressing room-cum-runway, in which women who had just met for the first time egged each other on in trying clothes while the rest shouted in the background: "Yes! Perfect! You have to take it!"

Which was how I wound up going home with twice as many clothes as I arrived with. Sorority is a dangerous enabler.

What my friends and I have come to realise is that we are consuming more clothes than we can get rid of. We do want to get rid of them, because that is how fashion works. You covet an outfit for the radical newness of it; once it materialises, it loses its relationship to that ideal future. The interminable quest for renewal restarts.

The desire for fashion is ubiquitous. "Everything makes you want pretty clothes like hell," laments Anna, the heroine of Jean Rhys's 1934 novel Voyage In The Dark. And this was back when department stores had just become a thing. They had yet to invent blogshops, Carousell and #outfitoftheday.

Clothing production has doubled worldwide in the last 15 years, according to a report last year by the Circular Fibres Initiative, started by think-tank Ellen MacArthur Foundation to rethink the global textiles economy.

This is due mostly to the phenomenon of fast fashion, cheaply and swiftly manufactured, sold, and pushed out of style. 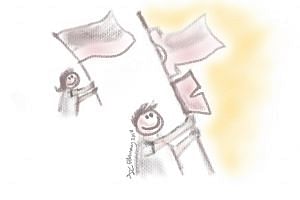 How about T-shirt, shorts and slippers as national costume?

Inversely, the use we get out of this snowballing amount of clothing is falling. It is barely worn and rarely recycled, more and more so as the global trade for used clothing declines.

This is bad news for the shrinking space in your closet, and terrible news for the environment. A 2016 report by management consulting firm McKinsey & Company estimates that if 80 per cent of the population of emerging economies reaches the same level of clothing consumption as the Western world by 2025, carbon dioxide emissions would increase by 77 per cent to 3,030 million tonnes.

While trying to get out of my unhealthy relationship with fast fashion, I fell in love with the past. I learnt, as the lyrics of singer-songwriter Liang Wern Fook's xinyao classic go, that old clothes can indeed be better than new.

Living abroad, I discovered flea markets and thrift stores. I spent hours in these musty havens, rummaging through racks of polka dot dresses, jumble boxes of scarves and the mysterious piles you get at car boot sales.

Among heaps of duds, one could find gems: a $10 faux leather jacket I loved so much that I wore it until it literally fell to pieces off me, or a glorious Karen Millen pencil skirt that a snag in the lining had knocked down from $200 to $45.

"Does it bother you that this used to belong to some total stranger?" remarked one of my shopping buddies. "That people could have died in this stuff?"

I was trying on a velvet elbow glove. The insides felt suspiciously sticky. "Er," I said, peeled it off gingerly and went in search of the bathroom.

But horrified as I was by this idea, given my superstitious Chinese upbringing, curiosity took over.

Everything I picked up had history to it. Who, for instance, was the woman who had made the slate blue polka dot dress that my friend brought back for me from Japan?

"This is homemade," deduced my friend, who is herself a seamstress. "No tailor marks, hand-sewn finishing." Stitched into the collar, tiny and precise in red thread, were the Japanese characters of Sokiri.

I wondered what Sokiri's life had been like, if that was indeed her name: this wasp-waisted Japanese woman from the 1950s who sewed her dresses by hand and painstakingly finished her seams with pinking shears. Each piece of clothing was like an archaeological site for someone's story, each stitch another clue to unearth.

Fashion is ultimately a paradox, one which "quotes the past in order to establish absolute novelty", as cultural studies professor Ulrich Lehmann writes in his book, Tigersprung: Fashion In Modernity (2000). Likewise, I have come to love old clothes for the chance to bring new life to a piece of someone else's history.

In a world where we are always being pushed to crave the new - new clothes, new phones, new cityscape, and less and less resources to furnish it all - there is something refreshing about salvaging the beauty already out there, and trying to make it work.

A version of this article appeared in the print edition of The Sunday Times on February 18, 2018, with the headline 'Why I am wearing old clothes this Chinese New Year'. Subscribe
Topics:
More
Whatsapp Linkedin FB Messenger Telegram Reddit WeChat Pinterest Print Purchase Article Copy permalink