The Wee Commission, comprising 11 jurists, subsequently met over six months, received 40 memorandums from the public, and held 10 public hearings. On Aug 27, 1966, the Wee Commission issued its report. Parliament debated the report. Ultimately, most of the commission's recommendations were ignored or rejected.

Fifty years later, Prime Minister Lee Hsien Loong announced the appointment of a Constitutional Commission on Jan 27, 2016. This would be only the second Constitutional Commission since Singapore's independence. Chaired by Chief Justice Sundaresh Menon, the nine-member commission (the Menon Commission) has been tasked to review the Elected Presidency (EP) scheme. It is to make recommendations on:

• Ensuring minority representation in the Presidency, particularly racial minority; and

• The framework for the President's exercise of custodial powers, with emphasis on giving more weight to the Council of Presidential Advisers.

The convening of this commission comes shortly after the General Election (GE) in September last year where the People's Action Party (PAP) won almost 70 per cent of the popular vote and ahead of the next Presidential Election due to be called before August 2017. 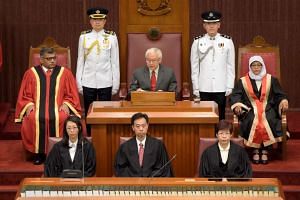 What might have prompted this move? Possibly the same concerns as those back in 1965: strengthening Singapore's democratic institutions by ensuring checks and balances of political power and buttressing good racial-religious dynamics.

This is amid a backdrop of growing sentiment in other societies towards further-left socialist programmes (read: Mr Bernie Sanders in the US Democratic Party and Mr Jeremy Corbyn in the British Labour Party) and increasing xenophobia and ethnic-religious tensions in a terrorism-plagued world.

On the former, we are reminded why the EP scheme was introduced in the first place. Then PM Goh Chok Tong explained in 1990 that the EP scheme is to protect Singapore from a nefarious opposition party coming into power in a "freak election" and expending national reserves on welfare programmes like free housing, healthcare and education, thereby bankrupting Singapore.

It is unsurprising then that the Terms of Reference (TOR) for the Menon Commission refer in two out of three substantive paragraphs to the "safeguarding (of) our financial reserves".

FEAR OF A FREAK ELECTION

The fear of a freak EP election may well be on the PAP Government's mind. Prior to the 2011 Presidential Election (PE), both presidents Ong Teng Cheong and S R Nathan were PAP-backed candidates. There was virtually no competition because no one else was deemed to have met the eligibility criteria. Mr Ong did have to contend with former accountant-general Chua Kim Yeow, but it's widely accepted that Mr Chua was persuaded by the Government to run in order to give the electorate a choice in the first ever PE.

The Government's convening of the Menon Commission is to be lauded for several reasons: the promotion of deliberative democracy; sensitivity to an evolving electorate; the strengthening of democratic political institutions; the desire for greater racial representation and equality; and the foresight of recalibrating constitutional checks and balances.

Then came the 2011 PE. Former PAP Member of Parliament Tan Cheng Bock ran as a candidate and lost by a hair's breadth of 0.35 per cent of votes cast, to PAP-backed candidate Tony Tan Keng Yam. The spectre of an EP who does not sing from the same hymn book as the PAP's is certainly good grounds for the PAP to increase stringency of candidates' eligibility criteria.

It is also telling that unlike the Wee Commission which comprised only jurists, four out of nine appointees in the Menon Commission are head honchos of Singapore's largest corporations. It suggests that this constitutional review is largely about addressing a human resource issue - determining the credentials for a financially astute leader - rather than issues of constitutionalism, which the Wee Commission faced.

The present eligibility criteria requires that the candidate has been for the past three years either a member of the Establishment (that is, minister, permanent secretary, chairman or CEO of certain statutory boards, et cetera) or if he or she is from the private sector: (i) chairman or CEO of a Singapore company with a paid-up capital of at least $100 million or its equivalent in foreign currency; or (ii) in any other similar or comparable position of seniority and responsibility in any other organisation or department of equivalent size or complexity in the public or private sector which, in the Presidential Elections Committee's (PEC) opinion, has given him/her such experience and ability in administering and managing financial affairs as to enable him/her to carry out effectively the functions and duties of the office of President.

Criteria (i) is probably not a concern since one would not expect a business person of such credentials to allow Singapore's national coffers to be bankrupted for some far-left economic programme. We can however expect the threshold figure to increase due to inflation, as has been alluded to by PM Lee in Parliament on Jan 27.

Criteria (ii), however, is subject to the PEC's discretion. And the PEC is comprised of the chairman of the Public Service Commission, the chairman of the Accounting and Corporate Regulatory Authority, and a member of the Presidential Council for Minority Rights.

This then leads us to the other concern surfaced in the TOR.

Along with safeguarding financial integrity of national coffers, it is twice stated in the TOR that the Menon Commission is to consider the aim of safeguarding the "integrity of our public service".

The EP has veto powers in the appointment of key office holders such as the Chief Justice, the Attorney-General and the Chief of Defence Force. Again this is to foreshadow a "freak election" where a hypothetical nefarious government appoints office holders in the public service who unfairly entrench the former's power. A strong public service independent of partisan politics is necessary to ensure Singapore's survival beyond the term of the nefarious government.

Yet, the scale has perhaps tilted towards addressing the PAP Government's fear that the "freak election" takes place at the PE rather than the GE. This perhaps explains why Paragraph 3 of the TOR beseeches the commission's review of "the role and composition of the Council of Presidential Advisers (CPA)... as an independent body to counsel and advise the President on the exercise of his powers".

The EP is presently obliged to consult the CPA before making important decisions on finances and appointment of key office holders. In other areas where the EP has discretionary powers, he may, but is not required to, consult the CPA. It is plausible that the scope of matters on which the EP must consult the CPA may be increased. Further, under the present Articles 21(2), 22A(1A), 22C and 148D, of the Singapore Constitution, Parliament may, by a two-thirds majority vote, overrule the EP's decision on certain matters if the EP makes that decision contrary to the recommendation of the CPA. It is possible that this mechanism may in future be extended to other matters as well.

Then, there is the issue of racial minority representation in the EP system. PM Lee noted in his parliamentary speech that Singapore has not had a Malay President at all since the EP system was introduced in 1991. As mentioned above, this is significant in today's global and regional climate where certain ethnic- religious communities face growing disaffection within their societies due to social tension from terrorist ideologies being closely associated to their communities.

When one does not see one's community represented in the highest political offices, the danger of alienation increases. The need for minority representation in the "unifying figure" of the President, as stated in the TOR, is clear.

In an interview with The Straits Times published on Aug 11, 1999, the late Mr Lee Kuan Yew expressed the intention to rotate the EP among the races by way of the Government backing their nominated candidate to the hilt. This, he shared, was necessary until such time as the electorate would stop voting along racial lines, which he thought would take generations.

Fast-forward 12 years to 2011. The PAP Government might not have expected a scenario where the candidate it backed could plausibly lose the vote. Given this new political context, which is a positive sign of a maturing democracy, it is likely the PAP Government is reconsidering alternative means to rotate the presidency among the races.

Would some form of affirmative action scheme be introduced? That could be inimical to meritocratic democracy and even undermine racial equality. In any case, it is probably for this reason that three members of the Presidential Council for Minority Rights are members of the Menon Commission: the Chief Justice, Mr Abdullah Tarmugi and Professor Chan Heng Chee. Three of the major races are also represented in these three members.

We have thus far traversed the possible underlying concerns motivating the review of the EP scheme. Yet the question remains unanswered: Why did the PAP appoint a Constitutional Commission instead of conducting the review itself? After all, the PAP had since 1991 designed, implemented and modified the EP scheme without such a commission. I believe the appointment of an independent commission is borne from the PAP's response to an electorate which desires more diverse voices being heard and given weight to, as PM Lee noted when reflecting on his party's strong success in GE 2015. The composition of the commission strongly suggests that independence, and the perception of it, is a paramount consideration in this strategic move.

Following the precedent of the Wee Commission, it is likely that the Menon Commission will hold public consultations. Members of the public and civil society organisations can then submit representations to the commission. In this way, the PAP hopes to impress especially the younger voters that it takes deliberative democracy seriously.

Yet, another question emerges. Why did the PAP convene an independent commission to review the EP scheme but not the decision to increase the number and powers of Non-Constituency MPs? It seems clear that the PAP would be going forward with the latter change, which is as significant as the former and which also requires amendments to the Singapore Constitution. A possible reason is that between the two constitutional schemes, the PAP perhaps thought that its proposed changes to the NCMP scheme would be seen by the electorate as an act of beneficence to the opposition. The opposition parties have been quick to blunt any such political scoring by casting this move in a negative light.

Positive or negative, this would be for the electorate to decide. As for the EP scheme, political points could be earned from holding a major consultative exercise. The fact that this is only the second Constitutional Commission since Singapore's independence cannot be over-emphasised.

In any case, the Government's convening of the Menon Commission is to be lauded for several reasons: the promotion of deliberative democracy; sensitivity to an evolving electorate; the strengthening of democratic political institutions; the desire for greater racial representation and equality; and the foresight of recalibrating constitutional checks and balances.

Yet, it remains to be seen how the PAP Government will respond to the commission's findings and recommendations. Will it be a repeat of Parliament's cold response to the Wee Commission's recommendations in 1966? Or will Singapore see the outworking of a maturing democracy in action?

• The writer is a lawyer in private practice and contributes regularly to law journals on legal issues of the day.

A version of this article appeared in the print edition of The Straits Times on February 17, 2016, with the headline 'Why a Constitutional Commission to review the Elected Presidency?'. Subscribe
Topics:
More
Whatsapp Linkedin FB Messenger Telegram Reddit WeChat Pinterest Print Purchase Article Copy permalink