In the second of a two-part series, scholars from the Iseas -Yusof Ishak Institute evaluate the legacy of outgoing US President Barack Obama in South-east Asia, and look to the challenges for the incoming administration after the Nov 8 presidential election.

On Friday, we featured perspectives on Indonesia, Malaysia and the Philippines.

Today, we offer viewpoints on Thailand, Vietnam, and US engagement with Asean.

The period since the 2014 coup d'etat in Thailand has given rise to an impression of strains in the country's relations with the United States. In fact, the administration that takes office in Washington in January will have the opportunity to develop sounder ties with Bangkok than have existed for many years.

Despite Thailand's designation as a "major non-Nato ally" of the United States in 2003, relations between the two countries had long felt stale and aimless by the time the Obama administration took office in 2009. As that administration began its "pivot" or "rebalance" towards Asia two years later, Thailand adopted the awkward position of a bystander.

At the same time, it remained home to one of the largest US embassies in the world and continued to host the US-led annual Cobra Gold military exercises. And its bilateral trade relationship with the US ranked as its most important outside Asia.

But Thailand did not join negotiations on the Trans-Pacific Partnership (TPP) agreement, the economic dimension of President Obama's pivot.

In comparison, Thai-Chinese relations displayed a dynamism that Thai-US relations had lacked for some decades. It did not help that US Ambassador Kristie Kenney's criticism of the abuse of lese majeste prosecutions undermined her country's popularity on the royalist "yellow" side of Thailand's political divide.

In the aftermath of the 2014 coup, matters only seemed to grow worse.

The US State Department criticised the authoritarianism of the National Council for Peace and Order (NCPO) junta. Washington cut the amount of military aid to Bangkok, if only by a token amount. The impending end of King Bhumibol Adulyadej's reign made the Thai elite extraordinarily sensitive to even the slightest hint of interference in their country's affairs.

Nevertheless, elements in the American national security bureaucracy were determined to safeguard the US-Thai relationship. They saw to it that Cobra Gold, while reduced in scale and restricted in scope to largely humanitarian activities, continued to take place every year.

From October last year, after a hiatus of 11 months, Washington again had an ambassador, the capable career diplomat Glyn Davies, en poste in Bangkok. The two countries held a strategic dialogue in that latter city three months later. They also enhanced cooperation in areas unrelated to hard security, including global warming and public health.

In February, President Obama hosted the Thai junta's head, General Prayut Chan-o-cha, at the US-Asean Special Leaders' Summit in California. And Bangkok repeatedly expressed an interest in joining the TPP.

While US relations with Thailand would suffer from the general havoc that an administration under the leadership of Mr Donald Trump would wreak, it now seems likely that Mrs Hillary Clinton will win the presidency.

Should President Obama fail to win congressional approval of the TPP, analysts expect President Clinton to find a pretext to change her mind yet again and seek its passage.

When, even under military rule, Thailand appears increasingly interested in balancing Washington and Beijing rather than surrendering itself entirely to China's embrace, it may make the effort required to join the economic pact.

Crucially, the demise of King Bhumibol may see Thailand enter a period of self-absorption in which memories of recent disagreements with Washington fade and the absence of a much-loved monarch reduces the prickliness and tensions surrounding the matter of lese majeste.

Finally, the inevitable eventual collapse of the backward-looking political project of the NCPO gives Washington the opportunity to make use of its public-diplomacy assets to position itself clearly on the side of the social forces fated to inherit Thailand's future.

The question is then whether these men, Ambassador Davies and those who work with them can muster the energy and imagination necessary to renovate America's relations with post-Bhumibol Thailand after decades of relative neglect.

US-Vietnam relations: Running on strong legs, but at what pace?

When United States President Barack Obama visited Vietnam in May, "Obama fever" swept through the country. The visit was considered a resounding success and opened a new chapter in US-Vietnam relations.

Beyond the traditional warm hospitality and friendliness, the Vietnamese people have good reason to shower Mr Obama with affection in recognition of his key role in bringing the relationship between the two former foes to a new high.

Under his stewardship, the two countries entered into a comprehensive partnership in 2013. More importantly, mutual trust has been strengthened. The budding ties were cemented last July, when Vietnamese Communist Party general secretary Nguyen Phu Trong visited the United States. Mr Trong is the first Communist Party leader to set foot on American soil.

At the same time, bilateral defence ties have also been upgraded. The two sides concluded a Memorandum of Understanding on defence relations in 2011, later supplemented by a "joint vision statement" announced in June last year. Prior to that, the two countries have held regular Defence Policy Dialogues since 2010, while naval engagement activities have also become more frequent. In May, Washington decided to fully lift its longstanding lethal arms embargo on Vietnam.

Bilateral defence cooperation has benefited from the Obama administration's strategic rebalancing to Asia, which was initiated in 2011 and vigorously supported by then Secretary of State Hillary Clinton. Vietnam has quietly welcomed this strategy as it helps to check China's ambitions in the South China Sea, while providing an additional lever to manage its topsy-turvy relations with its gigantic northern neighbour.

Bilateral economic ties are expected to step up a few gears should the Trans-Pacific Partnership (TPP) come into force. However, as the Obama presidency draws to a close, the fate of the TPP remains uncertain. If the landmark trade deal fails to get past the US Congress later this year, it is very likely to be scuttled. Predicted to be the biggest beneficiary among the 12 TPP members, Vietnam will easily become the biggest loser should the agreement fall through, and Hanoi will be deprived of an important strategic driver to strengthen relations with the new US administration.

Nevertheless, regardless of the fate of the TPP and the outcome of the presidential election, the momentum of the US-Vietnam relationship will likely be maintained, albeit at a slower pace.

Of the two presidential candidates, Vietnam may prefer Mrs Clinton to Mr Donald Trump. The former's foreign policy inclinations are more predictable and favourable to Vietnam, especially in terms of continuing with the US rebalance strategy and in keeping a hard stance on China. US-Vietnam relations also hold personal significance for Mrs Clinton as bilateral ties were normalised in 1994 during the presidency of her husband, Mr Bill Clinton.

If Mr Trump wins, he may downgrade US relations with Vietnam as well as with South-east Asia, but the realities of international politics, such as dealing with a rising China and the need to maintain US economic interests in the region, may require him to think twice. Due to political, economic and strategic reasons, the US still needs a healthy and robust relationship with Vietnam, especially when Washington's ties with its traditional South-east Asian allies, the Philippines and Thailand, have turned sour.

Of course, the first litmus test for the new administration's commitment towards Asia will be the TPP ratification. However, should the TPP fail, there are still other measures for the new US president to promote ties with Vietnam. The question is therefore not who will win the presidential election, but who will be able and willing to defend American interests in the region. For now, Mrs Clinton looks like a safer bet for Vietnam as well as the whole region.

Asean-US relations: Can the momentum be maintained?

Asean-United States relations have advanced substantially under the Obama administration, validating the notion of a South-east Asia rebalance within the US rebalance towards Asia.

Asean features importantly on the American strategic radar as a central pillar of its Asia "pivot".

Unlike previous "returns" to Asia which came in fits and starts, the Obama turn is multi-vectored and geographically inclusive, with a greater emphasis on South-east Asia and warmer embrace of multilateralism.

The US' robust engagement with Asean is situated in the shifting landscape of the Asia-Pacific, where China's growing influence and assertiveness are causing anxiety. Both sides have a common interest in fostering a rules-based regional order to enmesh a constructive rather than a revisionist China.

This was a powerful motivation for the US' participation in the East Asia Summit (EAS), which helped alter the EAS' exclusively Asian nature and offset China's predominant influence in this forum. Another important legacy is the unprecedentedly intensive institutionalisation of Asean-US relations. Under the Obama administration, the US acceded to the Treaty of Amity and Cooperation, joined the EAS and the Asean Defence Ministers' Meeting-Plus and institutionalised the Asean-US Summit.

The US is the first dialogue partner to establish a permanent mission to Asean and has elevated the partnership to a strategic level. 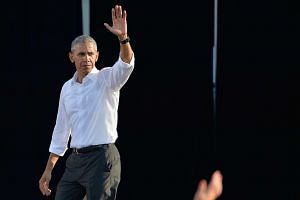 Mr Obama's visits to the region more than doubled those of any previous American president, including his attendance in all EAS, except in 2013. He also initiated the Asean-US Summit

on American soil in Sunnylands in February. The future of this engagement, however, is far from certain, hinging largely on the priorities of the new leadership.

The ongoing volatility of the election campaigns, with Mr Donald Trump's political rise and his starkly mercantilist and isolationist rhetoric, underpins the hard truth that US commitment to Asia hangs in the balance because of an increasingly dysfunctional and divisively partisan political system which manifests every four years. The uncertain future of the Trans-Pacific Partnership (TPP) is a case in point.

The new president should acquire a nuanced perspective of the complex geopolitical realities facing the region. The evolving regional architecture, including Asean's positioning therein, would hinge on how the incoming president manages the relationship with China.

A renewed commitment to the US' sustained engagement in the region, especially in Asean-led institutions, would help balance China's rising assertiveness in regional affairs. However, it should not be geared towards a zero-sum situation where regional countries have to choose sides between the two powers.

Nor is it in Asean's interest to see a US-Sino "G-2" condominium that carves out their respective spheres of influence in South-east Asia. A key challenge for the next president is to counter the perception that China's rise seems unstoppable and the US' decline inevitable, and a strategic compromise would eventually be drawn in matters like the South China Sea. It is critical to continue shoring up the already robust and fast-growing Asean-US economic interdependence, since it would not be tenable in the long run for regional countries to pivot towards China geo-economically and the US geopolitically. In this respect, the "make or break" of the TPP is a litmus test of the new administration's continuation of the rebalance.

Another fault line is the downward trajectory of the US' bilateral relations with key Asean allies like the Philippines and Thailand, partly due to American grandstanding on democracy and human rights. The Philippines, being the Asean chair next year and now seemingly "pivoting" to China, presents to the US a challenging strategic puzzle.

It will require a new American president with a long view of the US' long-term interests in South-east Asia, and an appreciation of the region's complexities and diversity, to ensure that its robust embrace with Asean will not relapse to neglect. Sustaining this robust engagement into the future is in the long-term interest of the US and Asean.