Many years ago, when the Malaysian budget airline AirAsia appeared, the then Ministry of Communications was faced with a dilemma. Should Singapore's aviation policy advance the interests of Singapore Airlines and its regional carrier, SilkAir, or should it seek to maintain Changi's position as an aviation hub?

Eventually, the correct decision was made: The public interest was defined in terms of Changi's hub status; Changi Airport should also strive to capture a significant slice of the burgeoning budget airline market. This decision has served Singapore and Singaporean travellers well.

Today, the Ministry of Transport (MOT) faces a similar dilemma. Should its policies for the taxi industry protect existing operators, or should they be agnostic about which firms succeed or fail?

This issue has arisen because of the emergence of third-party car-sharing apps that have the potential of disintermediating taxi companies and disrupting the taxi industry. How should the MOT decide?

To be sure, there are already some rules governing car-sharing apps like Uber and GrabCar. For instance, these companies are required to ensure that their drivers have a valid driving licence and are not illegal immigrants. The drivers also pay the higher car insurance rates set for commercial, rather than personal, use. They are not allowed to pick up passengers hailing taxis. The question facing the MOT today is whether beyond these requirements, there should be any additional rules. 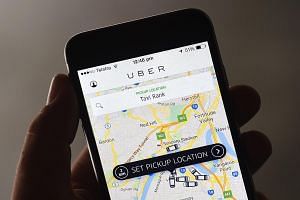 In love with Uber and Airbnb? You might have 'disruption fever'

Unlike aviation, the taxi industry is a non-tradable one. An inefficient taxi industry does not (really) hurt our international competitiveness. Perhaps because of this, a slew of uneconomic arguments making the case for more regulation of car-sharing apps has crept into the public debate in recent months.

Uber and GrabCar are unlikely to be the last of the technology-driven innovations to disrupt the domestic services sector in Singapore. Our regulatory position towards these car-sharing apps - as unimportant as they may be to our overall competitiveness - sends an important signal of whether the authorities in Singapore stand on the side of competition and consumer choice, or on the side of regulation and protection of incumbent firms.

Most economists agree that the right policy response to the emergence of these more convenient and potentially lower-priced alternatives is to welcome the disruption and disintermediation they bring rather than erect new regulatory barriers to soften the impacts on incumbents.

The arguments for more regulation of these car-sharing apps are also surprisingly flimsy.

The first argument commonly cited in favour of more regulation is passenger safety - either road safety or personal safety. It goes something like this: Since Uber's drivers aren't licensed taxi drivers, how would passengers know that they are not dangerous or that they have sufficient knowledge of Singapore's roads?

Safety is one of those things that people think about, mistakenly, in binary terms. This misconception is buttressed by cliches such as "your safety is our utmost priority" and "we should never compromise on safety".

In reality, none of us demands or expects absolute safety. We are constantly trading away safety for other things that we value - convenience, speed or cost. Some of us take up a more dangerous job than a less dangerous one - if we are paid more. We do not find these choices controversial or surprising. Neither do we ask that the more dangerous jobs be regulated to a point that they are as safe as a desk-bound job.

People also seldom think probabilistically about safety and often overreact to risks that are more vivid or more easily imagined. They pay more attention to lower-frequency but more dramatic events - such as terrorist attacks or plane crashes - than to less dramatic but higher-frequency events. For instance, most of us are probably unaware that suicide causes more deaths than traffic accidents.

Being new and unfamiliar, car-sharing apps may excite people's imagination about the risks to their safety. We therefore exaggerate the risks of car-sharing and assume that it is riskier than it actually is because of a few high-profile stories of violent Uber drivers.

Even if it were true that Uber drivers are less safe than licensed taxi drivers (there is, in fact, very little evidence to suggest that this assumption is empirically true), why is that necessarily an argument for more regulation?

In a market economy, we rely on people making their own risk-reward calculations and deciding for themselves whether they value a bit more convenience and affordability over safety. So long as consumers have a choice, we usually do not expect regulators to enforce uniform safety standards.

The second argument that is commonly cited in favour of (more) regulation is that government has a responsibility to ensure a level playing field. This argument is intuitively attractive because it appeals to our sense of fairness.

But let's be clear that in Singapore's context at least, the "level playing field" that some are arguing for is aimed at levelling the playing field for taxi companies rather than for taxi drivers.

Unlike many other cities where cab drivers have incurred large expenses to acquire the right to operate a taxi, taxi drivers in Singapore do not face high upfront costs to drive a taxi.

In fact, taxi drivers may actually have benefited from the new apps. Even if they do not switch to being independent drivers, they benefit from having superior apps that match taxis to passengers more efficiently, increasing their potential pool of customers.

So it's not the taxi drivers who are adversely affected; it's the taxi companies that are. Taxi companies are the ones that have borne most of the risks of offering taxi services - most notably in the form of maintaining a (large) fleet of taxis that are rented out to licensed cab drivers.

But isn't the fact that taxi companies have taken on these risks and now face the problem of stranded assets a reason to level the playing field for them? Not necessarily.

Running a business entails all kinds of risks, not least the risks of technology and business model obsolescence. The compensation for bearing these risks is profit. If their profits are dwindling as a result of new competition, they simply have to adapt: Lower their prices, copy the competitors which are eating into their profits or exit the market altogether.

This process of creative destruction is at the heart of the market economy. Only rarely is the right response to "level the playing field" such that the new firms which are disrupting outdated business models and giving customers more options face the same constraints and regulations as the incumbents. Doing so erodes the very benefits of creative destruction.

People are often drawn instinctively to more government regulation; they seldom see the costs of regulation and they assume that regulation always serves the interests of consumers. But in this context, the case for more regulation turns out to be extremely weak.

For decades, transport policymakers here have grappled with the problem of ensuring a better match between taxis and passengers - across both time and space. Those of us who take taxis have had to put up with an increasingly complicated and bewildering system of surcharges in pursuit of this objective.

Now we have the technological means to solve this problem. It boggles the mind that instead of embracing these new car-sharing apps, there are those who call for more regulation - regulation that, in our context, really just amounts to the protection of incumbent firms.

Regulation may be a justifiable policy response if the market is not working well. In this instance, new digital technologies and business models have made the market work much better than it ever did before.

Consumers benefit from greater choice and convenience. Taxi drivers are not hurt to an extent that we should require the entrants to be subject to more regulations; instead, they may even benefit from the new apps.

The only losers are existing taxi companies. But regulation should not exist to protect incumbents. Neither should there be a presumption that just because an activity poses some risks to safety, regulators must step in.

Just as we do not expect the state to regulate freelance tutors, domestic helpers, physical trainers, personal chefs and a whole host of people who provide personal services, all of which involve some risks to our personal safety, neither should we expect the state to impose more regulations on people offering car-sharing services.

Asking the state to do so should require a high burden of proof by the proponents of regulation that additional rules and regulations serve the interests of consumers and do not dampen the incentives for innovation and industry disruption. The proponents of more regulations to "level the playing field" have, so far, failed to make this case.

• The writer is the associate dean for executive education and research at the Lee Kuan Yew School of Public Policy, National University of Singapore.

A version of this article appeared in the print edition of The Straits Times on October 27, 2015, with the headline 'Uber: To regulate or not to regulate?'. Subscribe
Topics:
More
Whatsapp Linkedin FB Messenger Telegram Reddit WeChat Pinterest Print Purchase Article Copy permalink