DAVOS (Switzerland) • This time, the elephant will be in the room.

On Friday, United States President Donald Trump is set to address the 3,000 global business and political leaders who are beginning to gather in the Swiss alpine town of Davos from today, for the annual meeting of the World Economic Forum (WEF).

Last year, although he was not on the guest list, he had loomed large over proceedings throughout the week, with his name mentioned in both formal and informal discussions, with varying degrees of alarm and disdain. There was much consternation about just what the incoming President would do, given the fire and fury of his pronouncements on the campaign trail to the White House.

Curious myself, I had accepted an invitation to meet American financier Anthony "the Mooch" Scaramucci, a regular at Davos, well known for the splashy by-invitation-only wine parties he hosts on the sidelines of the conference. Having worked with Mr Trump on the campaign, he had come to Davos as an unofficial spokesman and acolyte of the new American leader.

Over drinks, the flashy Long Island New Yorker had extolled to me the virtues of his " good friend", Mr Trump, in between declarations that he would soon have an office in the West Wing.

He brashly declared that he had spent the day testing out on journalists like me the speech that he was going to deliver at several discussions at the forum. He would explain to the (expletives deleted) global elite how Mr Trump's American-centred administration would be good for the world, as it would revitalise the country's economy, creating jobs, boosting trade, and generally sorting out the mess the world was in. I can't honestly say that I was convinced. Nor, I suspect, were his audience the next day. But his sharp-shooting, straight-talking manner would portend things to come. None of us though had any inkling then of the ignominious way in which the Mooch would crash out of the White House in July, just 10 days after being appointed its communications chief, after an injudicious foul-mouthed rant to a reporter.

Against this backdrop, the stage was set for Chinese President Xi Jinping to steal the show on day one of last year's conference.

He sounded all the right notes about upholding free trade, promoting globalisation and working together to tackle climate change, which was music to the ears of his audience. Many lapped it up, ready to grasp at any reassurance that the global order they so cherished and had helped to nurture over the decades was not about to be swept away by the chilly winds of change swirling all about.

Then, just as things were wrapping up on the final afternoon of the conference, came the retort from the new American leader, who had been much bemoaned all week.

Groups of participants gathered to watch the live telecast of his inauguration speech in Washington. They huddled with furrowed brows and quizzical looks around televisions in conference rooms, hotels and bars - in shock and perhaps even awe - as Mr Trump delivered his thundering riposte to globalisation, declaring that "from this day on, it will be America First, America First!"

He pledged to put an end to the "carnage" that had been inflicted on American towns and workers by the globalised economic system that he charged had benefited wealthy elites, presumably like those gathered in Davos, even as it ravaged the American heartland.

It did not bode well at all, and many Davos delegates must have headed home from Switzerland with far more questions than usual about just what to expect on the geopolitical and economic fronts in the year ahead.

Temperature in the alpine resort, tipped to dip to around minus 5 deg C according to weather forecasts for the week, might take a further plunge if Mr Trump also gets embroiled in a debate on global warming. This is a perennial hot topic in Davos, where many speakers, including former US vice-president Al Gore, have spoken up forcefully over the years on the imperative of addressing the climate challenge. 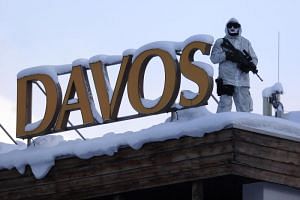 Donald Trump's trip to Davos in flux due to shutdown, says White House 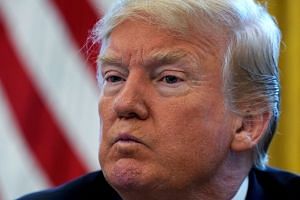 Who's afraid of Trump at Davos?

That was the prequel to this year's event. In a masterstroke of publicity planning by both the WEF and the White House, Mr Trump will attend this year, this time neither by proxy nor via satellite, but in person, no longer just the elephant in the room. He is set to address participants in the huge Congress Centre on Friday at 2pm Swiss time (9pm in Singapore). Like it or not, it will be the event of the week, as many wonder if the unpredictable "stable genius" will be able to resist the urge to rhetorically poke the global elite he claims to so despise in the eye, and then, no doubt, to tweet about it afterwards.

The response from the Davos crowd is likely to be frosty, if polite, given their longstanding support for making the world more open, more connected, more green, more inclusive, more joined by bridges than divided by walls.

Temperature in the alpine resort, tipped to dip to around minus 5 deg C according to weather forecasts for the week, might take a further plunge if Mr Trump also gets embroiled in a debate on global warming.

This is a perennial hot topic in Davos, where many speakers, including former US vice-president Al Gore, have spoken up forcefully over the years on the imperative of addressing the climate challenge.

All the more so this year, after the report published on Thursday by Britain's Met Office, US space agency Nasa and the National Oceanic and Atmospheric Administration, that last year was the warmest year on record without the effect of an El Nino, the temperature-boosting natural phenomenon.

"Last year was substantially warmer than 1998, which had a very big El Nino," Professor Peter Stott, acting director of the Met Office, told the BBC last week. "It shows clearly that the biggest natural influence on the climate is being dwarfed by human activities - predominantly C02 emissions."

The spate of extreme weather events all round the world - including one which saw thousands of tourists trapped in the upmarket ski resort of Zermatt in southern Switzerland, after unusually heavy snowfall cut off road and rail connections - have also heightened concerns about the mounting impact of global warming.

Mr Trump, who has been dubbed the "climate-sceptic-in-chief", dismisses all of this as a "hoax". He will no doubt be pressed to say why he continues to reject the evidence of even his own government's scientific experts, that mankind is precipitating a major change in the climate, which is contributing to the spate of freaky weather events the world has been experiencing lately, including here in Singapore.

French President Emmanuel Macron, who has said the world "is losing the battle" against climate change and not "moving quickly enough" to address it, will also be in Davos to take up the issue, and perhaps repeat his challenge to scientists everywhere to step up and "make the planet great again", an in-your-face dig at Mr Trump.

Others who might press the case include Canadian Prime Minister Justin Trudeau, German Chancellor Angela Merkel and British Prime Minister Theresa May, all of whom will attend this year's meeting. They will be among the more than 300 world leaders, with their official delegations in tow, who will make the journey to the ski resort town by road - more than two hours by car from Zurich - rail or, if means permit, helicopter. The list includes unlikely pairings such as the prime minsters of both India and Pakistan, Israel and the Palestinian Authority, as well as top foreign affairs officials from Saudi Arabia and Qatar, a testimony to the WEF's diplomatic deftness in bringing key players to the table.

From Singapore, which has assumed the chairmanship of Asean this year, two leaders will seek to put the regional grouping on the agenda. Deputy Prime Minister Tharman Shanmugaratnam is to speak on a panel on the Strategic Outlook for Asean, while Mr Chan Chun Sing, NTUC chief and Minister in the Prime Minister's Office, is slated to take part in a discussion on Asean: Thriving in Times of Change. Mr Chan will also be on other panels with titles such as The Belt and Road Impact and Asia Game-Changers.

Asean has long had a significant presence at this annual event. A gala Indonesia night typically held at a swish hotel along the main promenade often draws a big crowd. Previous years have seen long lines of people queueing in the cold to get in, no doubt tempted by the tasty treats on offer, prepared by chefs brought in from various parts of Indonesia, complete with air-flown spices and supplies.

Similar dinners, luncheons, parties, drinks and other events are also hosted throughout the day by Japan, South Korea, Russia and Mexico, among others, as well as corporations like UBS, Credit Suisse, Microsoft, Tata and also universities like Harvard and Oxford.

It all adds up to a mind-spinning mix of frenzied talks and calls to action on issues ranging from environmental concerns and looming threats to jobs from artificial intelligence to gender equality issues - all seven chairpersons for this year's conference are women - and worries about the next financial crisis or global pandemic.

Yet, amazingly, for all the troubles in the world, one man will loom large over everything else, just as he did last year. At least, this time, tantalisingly, he will actually be in the room.