When Islamic State in Iraq and Syria (ISIS) militants used handguns and grenades to carry out a deadly attack in Jakarta on Thursday, a top Indonesian police official immediately compared it to the brutal assaults in Paris late last year that killed 130 people.

There were definite similarities. Both attacks took place in the heart of crowded capitals, both involved militants using guns and explosives, and both were claimed by ISIS. They also both claimed lives: at least two civilians were killed in the Jakarta strike, which injured more than 20, including six police officers. Five assailants died in the onslaught - some by their own hand - and police arrested four others.

But the Jakarta attack also differed significantly from the Paris ones. Despite the ISIS connection, the Jakarta assault showed evidence of motivations and patterns particular to Indonesia, was likely carried out in response to specific conditions in Indonesia, and cannot be understood outside the context of Indonesia's history of home-grown extremism - as well as the government's violent campaign against it.

"This was a brazen attack in Central Jakarta during lunch hours, but the casualty figures remain astoundingly low," terrorism and security analyst Judith Jacob, who is based in Singapore, told Foreign Policy. "It didn't have the same level of indiscriminate firing that we saw in Istanbul or Paris."

It wasn't even clear that civilians were the main targets. The attackers appear to have focused on the area around a tiny police station in the middle of Jalan Thamrin, a thoroughfare connecting the Hotel Indonesia roundabout, where the well-known Selamat Datang ("Welcome") monument overlooks dizzying snarls of traffic, to Merdeka Square, an area equivalent to the National Mall in Washington. When United States President Barack Obama visited Jakarta in 2010, he drove down Jalan Thamrin as part of a sentimental trip through a city he had lived in as a child. 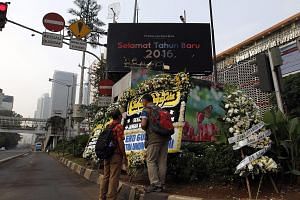 ISIS claimed responsibility for the attack - its first in South-east Asia. Indonesian police identified Bahrun Naim, an Indonesian citizen thought now to be in or near ISIS' de facto capital in the Syrian city of Raqqa, as the principal organiser.

The creeping menace of Asian Islamism

Naim is a leader of Katibah Nusantara, an extremist group that has served as a link between ISIS and Islamist militants in Indonesia and Malaysia. Katibah Nusantara had around 100 members in 2014, but "indications are that it had grown considerably and was being deployed in different areas", Ms Sidney Jones, director of the Jakarta-based Institute for Policy Analysis of Conflict, told Foreign Policy last September.

Ms Jacob said Naim, the accused organiser, has called for Indonesian Islamist radicals to "emulate the Paris attacks in Jakarta". "But it still begs the question: How much has this been an Indonesian jihadist capitalising on events that have happened recently in Paris to further the ambitions of an inward-looking jihadist movement within Indonesia?"

Police in Indonesia have long grappled with home-grown extremism. They have also been its target. "The predominant targeting choice has been security services," Ms Jacob said, although Thursday's attack represented "a slight departure from that norm" because of the apparent inclusion of a Starbucks in Sarinah - the city's oldest mall and a landmark in its own right - located alongside the police post.

On whether police officers were the intended victims, Indonesian Ambassador to the United States Budi Bowoleksono said by e-mail in response to a question from Foreign Policy: "At this moment, we are still conducting a thorough investigation and have not come to any specific conclusion yet."

Militant group Jemaah Islamiah carried out bombings in Bali in 2002 that left more than 200 people dead. At the time, the group had ties to Al-Qaeda. Santoso, a terrorist leader once part of Jemaah Islamiah, has since pledged to back ISIS. His supporters, based in the area around the town of Poso in Sulawesi, have carried out a number of assaults on police.

"The targeted attacks on police just escalated after… police forces started to chase the radicals in Poso, which has been their hiding place for some time, since 2011 or 2012," Mr Fitriyan Zamzami, the national affairs editor of Republika, a prominent Jakarta newspaper, told Foreign Policy.

"The police and the radicals have been in a tit-for-tat game in Poso ever since."

Mr Zamzami said the police may have sparked the attack by launching a crackdown on domestic terror suspects shortly before Christmas. Some 16 were taken into custody in the past month. "Almost no week passed without the police arresting somebody somewhere that they claimed to be a suspected IS sympathiser," he said, referring to ISIS. "The arrests by Indonesian police may have pushed those attackers."

Thursday's attacks continued a pattern of targeted attacks on police by Indonesian Islamist militants, but it also showed a new boldness and willingness to kill civilians, unseen in recent years.

"Maybe this was just retribution against the police, but I also look at the fact that it was in a public setting, and I see the home-grown threat beginning to overlap with ISIL such that they are indistinguishable," Mr Ryan Greer, a fellow with the Truman National Security Project, said in an e-mail, using another name for the terror group.

And as some of the hundreds of Indonesians fighting for the group in Iraq and Syria try to return, ISIS' influence in the country - and its capacity to carry out attacks there - will only increase.

"More and more Indonesians are getting killed in Syria… and revenge is a powerful motive," Ms Jones of the Institute for Policy Analysis of Conflict wrote in a far-sighted article last November. "If Indonesian police have been the main victims of home-grown terrorism since 2010, we could now see a shift back towards Westerners and soft targets."

•Distributed by The New YorkTimes Syndicate