After the grieving, the SAF has to pick itself up, lick its wounds and dust itself off, then take up its guns and keep moving forward on its way once more.

The spate of incidents involving casualties has left morale at Mindef and the Singapore Armed Forces at an unprecedented low. A review of safety procedures is necessary, but the wrong signal should not be sent, whether through public discourse or post-review measures, because Singaporeans and (people in) neighbouring countries alike are watching the repercussions of Aloysius Pang's unfortunate death during training in New Zealand.

In fact, the extreme comments on social media are to be expected.

But it would be missing the point when things get blown up to the extent of opposing national service (NS), policies and systems, and the Government.

In 2013, the Committee to Strengthen National Service commissioned the Lee Kuan Yew School of Public Policy to conduct an independent study to get a better idea of Singaporeans' views on NS.

The study showed that Singaporeans are basically very positive about NS, with as much as 98.4 per cent agreeing that NS was necessary for the defence of Singapore, and to ensure the country's development and prosperity.

The accuracy of the survey aside, Singaporeans' support for NS and the SAF is undeniable. And it was because of such strong public support that the two-year, full-time NS and 10-year in-camp training can continue to be implemented, despite high individual and economic costs.

The people's support is also why the Government allocates huge budgets to Mindef every year, giving it the confidence and means to purchase fighter planes that cost more than $100 million.

If people start to question now whether NS is necessary, if operationally ready NSmen should shoulder certain responsibilities, and whether the tempo and intensity of military training should be reduced, this could send the wrong message both domestically and abroad.

At a recent conference, Mr Bilahari Kausikan, former permanent secretary of the Ministry of Foreign Affairs, clearly pointed out that Singaporeans should not confuse NS policy" with "training safety". He said that realistic military training is vital as there will be no deterrence without it.

A real-life example would be the intrusion of Malaysian government vessels into Singapore territorial waters. Without a strong military force, what is there to back up our diplomatic negotiations?

There were also other messages that were subtler, but can lead to unexpected results with different interpretations and extrapolations.

At the command call held on Thursday, the SAF further emphasised the need for commanders to be responsible for the safety of the soldiers, and that they adopt a "zero tolerance" attitude towards safety violations. 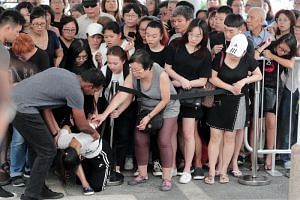 While this is a well-intentioned directive, it will be difficult to find the right balance during implementation.

The orders that cascade to every level, and the pressure of public opinion, will eventually fall on the shoulders of the supervising platoon or section commander.

Would this lead to the negative effect of finding fault at every turn?

In fact, the Singapore Army has a very comprehensive safety structure and hierarchy.

Other than the Army Safety Inspectorate, which reports directly to the Chief of Army, every combat unit has a Unit Safety Officer, who is a full-time regular soldier, and a Formation Safety Officer above him.

All exercises, outfield activities and physical training sessions must comply with training safety regulations. Even games must have training plans written down in black and white, with a risk assessment checklist. A safety officer will also be present to supervise safety matters during the activity.

There is a myriad of safety regulations in the army and it is not possible to list them all here. In fact, during training, many commanders often have to strike a balance between safety procedures and realistic training.

This time, the SAF called for a safety timeout after the incident, halting all strenuous activities such as military exercises and training, runs, foot drill, outfield training, the Individual Physical Proficiency Test and remedial training.

Aside from preventing accidents from happening again, the purpose of the timeout is, I believe, to send the signal to Singaporeans that the SAF is serious about conducting a review, and also convey the severity of the matter to servicemen of all ranks.

However, if the message is not communicated properly, and ends up diluting the SAF's typically-strict requirements towards training, the delicate balance between safety and military training standards will tilt the other way.

A version of this article appeared in the print edition of The Straits Times on February 05, 2019, with the headline 'Through the pain, do not send wrong signals about NS'. Subscribe
Topics:
More
Whatsapp Linkedin FB Messenger Telegram Reddit WeChat Pinterest Print Purchase Article Copy permalink