Singapore has implemented "circuit breakers" for four weeks, from yesterday, to try to stem the rise in Covid-19 cases.

On Sunday, there were 120 new cases - the first time this number has exceeded 100 - and a big jump from the previous high of 75 new cases.

The big question is whether the additional measures will be enough - or if the lid is already off Pandora's box.

According to Google mobility reports, in the last week of last month, there was already a 40 per cent drop in people taking public transport, 28 per cent fewer people at retail and recreation venues, and 15 per cent fewer at workplaces.

The new measures - closure of all non-essential services and schools; and people to stay home except when buying food and other essentials, and to not socialise - should see these numbers fall further.

But will they be enough to lower the transmission of the virus to below a rate of one - which means one person infecting just one other person - which is essential for the number of infections to fall?

If effective, the measures can be eased in a month; if not, they will need to be even more restrictive.

There are three main areas of viral transmission to watch and they need to be tackled differently.

Almost half the people with Covid-19 here were infected overseas. Some have passed the virus to others, mainly to close family members living in the same home.

Singapore has been putting in increasingly stringent measures to ring-fence returning residents to stop them from spreading the virus.

Non-residents are not allowed to enter, or even transit, at the airport. Everyone entering Singapore - except by land from Malaysia such as those bringing in produce - has to isolate himself for 14 days.

Returning residents from Asean, France, India, Switzerland, Britain and the United States are taken from the airport to government isolation facilities, where they have to remain for 14 days.

The Ministry of Health (MOH) said it does not have the facilities to accommodate all returning residents, or it would put everyone coming back in such isolation to prevent any who is infected from spreading the virus. People returning from other countries are required to be isolated at home for 14 days.

These measures should prevent the spread from returning residents - if those at home are disciplined about staying away from others.

The number of new daily imported cases has fallen to single-digit numbers, but vigilance remains necessary.

Apart from imported cases, there are more than 150 Covid-19 patients here whose source of infection is unknown. The worry is that the person who infected them may also have infected others - some of whom have not been picked up and can go on to spread the virus further.

As the disease can be spread by people with no symptoms and each infected person could pass the virus to 2.5 others, as shown globally, this can spell a major surge in cases here.

This is why the four-week circuit-breaker measures are needed to break the spread and cut the transmission rate here. 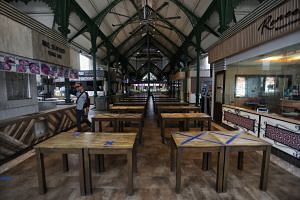 In Pictures: Businesses come to a standstill in Singapore

Day 1 of Covid-19 'circuit breaker' measures, and Singapore is a stiller city

Associate Professor Alex Cook, vice-dean of research at the NUS Saw Swee Hock School of Public Health, hopes these measures can reduce the spread of the virus from 2.5 to just 0.5 - which means two infected people go on to infect one other person instead of five others.

Once the transmission is less than one, numbers will start going down.

Associate Professor Hsu Liyang, an epidemiologist and infectious diseases expert from the school, said that based on what has happened in other countries, the measures should be effective.

The proviso is, he said, "if the majority of people truly stay home and do not abuse the restrictions".

He added that there are important operational details, like how to prevent crowding and congestion at essential services and protecting the staff that provide these.

If the measures cannot bring the transmission rate to below one, he said, then the number of cases will continue to rise.

The outbreak of Covid-19 in foreign worker dormitories is another area of grave concern, given the tens of thousands of workers living in close proximity to one another in cramped quarters - which makes for the easy spread of the virus.

Prof Cook said these dormitories are his big worry now.

"We've seen before that the conditions these men live in lend themselves to explosive disease transmission, and that will be especially so under the one month of the circuit breaking when they are forced to stay in the dorm," he said.

"I hope some creative solutions can be found to create more space between these workers to avoid a disastrous epidemic unfolding."

Prof Hsu said the spread in the dormitories will "potentially be no different from what we have seen on quarantined cruise ships" since people are confined within the facilities.

More than 700 people on board the Diamond Princess cruise ship were infected and 11 died.

Steps are in place to separate groups of foreign workers to try to prevent the further spread of the virus among them.

Professor Teo Yik Ying, dean of the NUS Saw Swee Hock School of Public Health, said of the dormitory clusters: "The effective approach now is to quarantine the entire compound and, at the same time, put in place the necessary medical support to quickly identify who are not feeling well and to give them the appropriate medical attention as early as possible."

WHAT THE FUTURE HOLDS

Prof Teo said it will take time for the measures to make an impact and expects the number of infections to stay high for a fortnight.

"This means we cannot keep assuming the situation will remain manageable, that our hospitals will continue to be able to cope," he said.

He added that it would be prudent to provide hospitals with "a release valve, where mild patients can be decanted to facilities that still provide the necessary medical attention and care, but at the same time, relieve the burden in our tertiary hospitals to look after the sicker patients".

Prof Hsu said the spread of the virus in the community is the most worrying because it is the most difficult to control.

There are also people with a higher risk of getting seriously ill, such as the frail or those with medical conditions.

There is a silver lining for foreign workers as most of them are young and healthy without significant pre-existing medical conditions, he said.

Based on other countries' experience, less than 5 per cent of such patients require hospitalisation and less than 1 per cent need critical care.

Coronavirus: When the dust settles, a stronger Singapore must emerge

'Circuit-breaker' for Covid-19: Why time is of the essence now

Singapore's response to Covid-19: The third stage in a long-haul battle

But he added: "Of course, a large number of persons infected over a short period of time will still add considerable strain to our healthcare system."

Singapore has about 1,100 critical care beds - in both intensive care (ICU) and high dependency (HDU) units - in the public and private sectors.

But not all have mechanical ventilators which some Covid-19 patients require in order to breathe when the virus affects their lungs.

An MOH spokesman told The Straits Times that ICUs are equipped with resuscitation and monitoring equipment such as ventilators to manage critically ill patients, while HDUs are catered for patients who require close monitoring and care, but less intensive clinical support.

MOH would not give the actual number, but ST understands that ICU beds account for roughly half the critical care beds.

These critical care beds are also needed by patients with other medical conditions. In normal times, the demand for these beds is quite high.

However, since the Covid-19 outbreak started, Singapore has been pushing back non-urgent treatments to free up hospital beds, including critical care beds.

Overall, 10 per cent to 15 per cent of Covid-19 patients get critically sick. In Britain, two in three such patients need mechanical ventilators to help them breathe for a median of five days. Some need it for weeks.

Currently, about 25 Covid-19 patients are in critical care in Singapore. So long as this number remains fairly low, the healthcare system here can provide them with the best care they need.

Professor Dale Fisher, a senior infectious diseases expert at the National University Hospital, said: "It's now all about stamping out these big clusters while preventing more big ones."

If the numbers fall, measures will be loosened - not immediately, but "step-wise", mirroring the way measures had been stepped up over recent weeks, he said.

"Agility and responding fast with measured interventions is the order of the day," he added.

The circuit-breaker measures can reduce viral transmission - but only if everyone plays his part and stays home.

A version of this article appeared in the print edition of The Straits Times on April 08, 2020, with the headline 'Three areas to watch to see if 'circuit breakers' are working'. Subscribe
Topics:
More
Whatsapp Linkedin FB Messenger Telegram Reddit WeChat Pinterest Print Purchase Article Copy permalink