Painted a bright red, the cycling paths built over the past year in Ang Mo Kio have rolled out a warm welcome for cyclists in the estate, who nickname it their "red carpet".

The paths span 4km and loop around Ang Mo Kio Avenues 1, 3 and 8. Located away from the road, beside the concrete footpath, they are the first cycling paths in Singapore to be painted a distinctive red.

The network will stretch to 20km when finished in 2018.

But some cyclists, such as Mr William Khaw, already use it daily for their commute. The 46-year-old operations manager cycles to his workplace in the estate from his home in Sengkang.

While biker-friendly infrastructure like this has been a boon for boosting safety and is a key strategy of the Government in encouraging people to take up cycling, equally important is educating people on how to use these public spaces safely, say experts.

Just ask Mr Khaw, who says that despite the ample space available to both cyclists and pedestrians, he still finds himself dodging pedestrians on the bike path.

Many people can cycle in parks, but you require a different level of expertise and confidence to cycle in traffic - you need to be able to turn your head or raise your hands to indicate.

"There's a big drawing of a bike on the path but people still walk on it. I try to be more patient, slow down, and sometimes I ring my bell to let them know I am behind before I overtake," he says.

"Sometimes I tell (pedestrians) not to walk here, but they'll argue with me. It's dangerous because sometimes they are texting or reading on their phones and can't see bikes coming," says Mr Goh, 76, who lives in the area.

With the Active Mobility Bill passed last week, the Government has officially allowed cyclists and PMD users to use public paths, which include footpaths, cycling paths and shared paths.

While the change will allow cyclists and personal mobility device (PMD) users to ride in a safe environment, it also puts them in the path of pedestrians.

This is a point many MPs raised in Parliament during the debate on the Bill. Many, like Potong Pasir MP Sitoh Yih Pin, felt that as the use of PMDs proliferates, pathways would get more crowded and "more accidents involving PMDs are bound to happen". 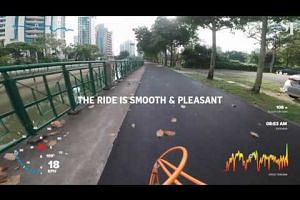 To keep everyone safe, both stiff penalties and education - to deter rule-breaking and develop a culture of sharing respectively - are important, says Mr Francis Chu, co-founder of cycling group Love Cycling SG.

Addressing suggestions that a safety test similar to the Highway Code for drivers be implemented, Mr Chu, who sits on the Government's Active Mobility Advisory Panel, says it would be difficult to find a test generic enough to accommodate the wide demographic who cycle or use PMDs.

A more feasible alternative is to teach cycling as a "basic lifeskill" in schools, he says.

In the Netherlands, safe cycling practices are embedded in the school curriculum, where children have cycling classes and sit an exam on traffic rules.

Last year, the Land Transport Authority launched a Safe Cycling Programme for schools but because it is not compulsory, its reach remains limited, say experts.

Dr Alexander Erath, from the Singapore-ETH Future Cities Laboratory, says besides investing in the infrastructure, the Government needs to nurture a cycling culture. This could be done by teaching basic cycling skills at places like schools. "Many people can cycle in parks, but you require a different level of expertise and confidence to cycle in traffic - you need to be able to turn your head or raise your hands to indicate," says Dr Erath.

Mr Chu agrees: "Being able to control (your) device at slow speed is the only critical skill you need to mix with pedestrians safely."

Love Cycling SG has been conducting clinics about twice a year over the past three years, to teach people these skills. More than 50 cyclists attended the last clinic, on Jan 8.

Mr Chu suggests that learner drivers could be made to cycle on the roads to experience what riding a bike in traffic is like before they can get a licence. "The ultimate goal is for everyone to go home safely whether you are driving, using a bicycle or walking," he says.

A version of this article appeared in the print edition of The Sunday Times on January 15, 2017, with the headline 'The 'red carpet' and spotlight on safety'. Subscribe
Topics:
More
Whatsapp Linkedin FB Messenger Telegram Reddit WeChat Pinterest Print Purchase Article Copy permalink