For many non-French, the idea that one of the most enlightened, wealthy and stable European nations should question the acceptability of the "burkini" - the loose-fitting wetsuit worn by some Muslim women as a way of avoiding showing too much skin while enjoying a day at the seaside - seems bizarre, if not downright silly.

But not in France, where the garment is seen as a deliberately chosen symbol of rejected integration, and where politicians appear to have persuaded themselves that some religious-based dress codes almost automatically imply disloyalty to their nation and its values.

There isn't a single explanation as to why France continues to react in such a visceral way to any cultural dispute with its Muslims, or why France's relations with its Muslim community are far more tense than those of other European countries. But France's very specific historic traditions have a great deal to do with this problem, and are likely to continue complicating the integration of its Muslim minority. Put simply, France is a unique case in Europe.

One factor making France's relations with its Muslims more difficult than those of its European neighbours is the sheer size of its Muslim community, which, at around 8 per cent of France's total population, is the highest in Europe, almost double the corresponding percentage in Britain, and a quarter higher than the share of Muslims in Germany's population.

This does not make the French either particularly racist, or anti-Islamic. In fact, as a pan-European poll conducted earlier this year by the Pew Research Centre, a think-tank, revealed, only 28 per cent of voters in France admit to having a negative opinion of Muslims, far less than almost everywhere else in Europe.

Still, larger numbers mean more social and economic problems and a more acute identity crisis for the Muslim community, which, in turn, translate into greater political difficulties. A larger share of France's Muslims live in effectively segregated urban communities than Muslims in Britain, for instance. And the incidence of petty crime - as well as wealth disparities - in such communities is higher than figures recorded in comparable deprived residential areas in other European states.

THE CULT OF THE REPUBLIC

But the biggest difference in this respect between France and the rest of its continent is that, for most Frenchmen and women, their existence is not only about a country and a nation, but about a community of values - values which are pre-determined and not easily movable.

And, partly because France has experienced five different republics, three monarchical restorations and two empires over the past 200 years, the concept of "la Republique" as a fragile institution which needs to be defended constantly is deeply ingrained in French public life. All the speeches of French presidents and those of most other officials invariably end with the traditional cry of "long live France, long live the republic". 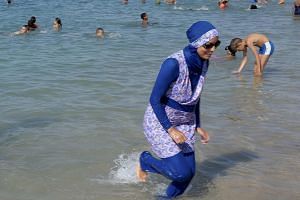 The cult of the republic is so pervasive and so obsessive that people not familiar with French history may well conclude that the country lives under a permanent fear of another restoration of the monarchy. In every village and every local government office in every corner of France and its overseas territories, from the Americas to the Pacific, there would either be a little statuette for Marianne - the mythical woman representing the republic - or a little shield with the "RF" letters, standing for "Republique Francaise", usually framed by flags. No other European country engages in such a strange cult, which deliberately fuses into one national identity and the form of government as though the two are indistinguishable.

The French republic is supposed to be colour-blind and, although this has not always been the case - for instance, veterans of France's African colonial regiments who fought bravely and selflessly for France in two world wars had to wait for decades thereafter before they were paid pensions equal to those paid to their "white" comrades - the French state is often more inclusive than other European countries.

France's recent governments have had a higher number of ministers belonging to various ethnic minorities than governments in Britain, and French media as well as public life is very diverse in its ethnic make-up. French law bans the state from collecting any details about the race, ethnicity or religion of its people. The idea is that the republic needs none of this data, since it's allegedly irrelevant.

But there is a corollary obligation to this rigorously enforced policy of equality: Members of various religious or ethnic groups are not only expected to integrate, they are expected to assimilate, to become French men and women with no ifs, no buts, and no other caveats. And nowhere is this obligation more onerous than when it comes to the treatment of religion.

WHAT A SECULAR STATE MEANS IN FRANCE

The current French Constitution, adopted in 1958, starts with the memorable phrase that "France shall be an indivisible, secular, democratic and social republic". Yet the word "secular" does not truly convey the meaning of the French word "laique", which the Constitution uses.

For the word is central to the attitude of the French state and the French people towards religion, and it means more than just the separation of religion from the state: It also now implies - although it did not do so in the past - a relegation of religion to a marginal status.

According to a 1905 law, the French government is legally prohibited from recognising any religion. Instead, it merely recognises religious organisations, according to formal legal criteria that do not address religious beliefs. No religion can be supported by the state, religious education in schools is strictly forbidden and no new religious symbols can be placed in public places, including graveyards.

More broadly, public expression of religious beliefs are viewed in France with distaste and suspicion, and organised religion is regarded as a retrograde step, a return to a dark past which "The Republic" supposedly ended. In effect, the French republic "privatised" religion: Faith is something people practise only at home. And what constitutes the public and the private spheres is not up to people to decide, but is a prerogative which belongs solely to the state.

It was obvious for decades that these arrangements jarred with many of France's Muslims. Yet instead of finding compromises, French politicians tightened the legal obligations of their secular state with a new law which bans the wearing of a headscarf by Muslim girls at schools, the wearing of a skullcap by Jews or the wearing of a conspicuous crucifix by Christians.

It is tempting to blame this tendency to legislate against religion on just opportunist politicians keen to jump on any anti-Muslim bandwagon. But this underestimates the genuine popular support for secularism in France. Laws and regulations which ban outward displays of religion are adopted by the French Parliament with crushing majorities and support across the political spectrum.

Seen from this perspective, the attempted ban on the burkini - now largely reversed by France's judges - makes perfect sense. What the various French mayors who imposed the ban did was to uphold, as they saw it, the status of beaches as religious-free public places, where no outward displays of faith should be allowed. The ban may appear comical to us, but it certainly was not a funny pastime for the French.

Ultimately, the tussle taking place in France is not only about the place of Islam in Europe or the integration of a community into a European state, but about how much a European nation must itself change in order to accommodate a more diverse composition, and how much the Europeans should acknowledge that their views of religion as essentially "yesterday's story" are no longer acceptable to more pious citizens of different faiths.

Every European state has a stake in what is happening now in France.

But only the French can answer the fundamental questions facing them. And, at least for the moment, their determination to uphold their secular republican traditions remains unshaken. Expect the forthcoming French presidential electoral campaign to spark off many more burkini-style disputes.