Three years ago, I requested information from Raffles Institution on its decision to open an O-level class.

RI, which had for years produced top O-level students, was among the first eight schools to offer the six-year Integrated Programme (IP) when it was launched in 2004. It is known as the "through-train" programme as it allows students to bypass the O levels and aim for the A levels or International Baccalaureate. The scheme was aimed at the top 10 per cent of students who are clearly bound for university. The idea, when it was launched, was to provide a seamless secondary and junior college education, giving students the space to develop intellectual curiosity and other talents.

But, over the years, a small group of RI students failed to thrive on the IP track. They would leave quietly for polytechnics or lesser-ranked junior colleges. Some would go on to sit the A levels, only to perform poorly. Their parents complained that they didn't even have an O-level certificate to fall back on. 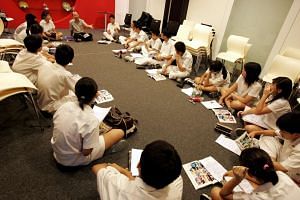 About 6% of students likely to not finish IP

So RI finally decided to open an O-level class for them.

However, back then, RI officials turned down my request for information on the move, claiming that the parents of the boys routed to the O-level class did not want their children to be interviewed for the story.

I was surprised to be turned down as, in a previous story, I had already reported on other top IP schools such as Hwa Chong Institution and Dunman High offering the O-level track and that RI was considering the same scheme.

As well, I was told that some of the boys were embarrassed and did not want to be featured in The Straits Times.

It was not just the parents and students. The school officials, too, did not want me to report on the details of the scheme and refused to tell me how many were routed to the track.

I checked RI's website again last week, and failed to find any reference to the O-level track, which leaves me to surmise that the school, which publicises the A-level results of its students, wants to keep mum about its O-level track and the students' results.

It is time to be upfront about offering both schemes. RI and the other schools should give full information on both programmes and how the students performed in the final examinations. Parents who have attended open houses at the top IP schools say they paint a rosy picture by publicising the stellar A-level results of their students. There is no mention of their O-level class, or of those who fail.

They should also look into deploying teachers who are familiar with the O levels and good at preparing students.

A school official, though, confirmed the results reported last month by online site The Middle Ground - only one out of the 10 boys who took the O levels last year did well enough to make it to a junior college. The other nine qualified for polytechnic studies.

It is not just RI keeping silent on its O-level offering. I don't see the other top IP schools, including Hwa Chong Institution and Nanyang Girls' High - which now offer the two routes - mentioning the O-level track or their students' results.

Why has the O-level track become the track of shame at top IP schools?

THE RISE AND RISE OF THE IP Because the IP scheme was run at premier schools like Raffles and Hwa Chong family of schools, soon more pupils and parents clamoured to get on board, and it gave rise to tuition centres specialising in helping top students make the cut-off score for IP schools. Several centres also launched courses to prepare students for the Direct School Admission scheme, which allows all schools, including those offering the IP, to take into account other abilities, such as in sports or arts.

Soon, other top secondary schools which were losing their best students to the IP, also jumped on the IP bandwagon. Currently 18 schools are offering the programme, although the schools that joined the scheme later offer both the O-level and IP track from Secondary 1.

But 12 years after the programme began, policymakers and educators face the prospect of the "through-train" IP having become a runaway train.

This is because of the effects it is having on students and parents' behaviour and the question of whether it still fulfils the original objective - to allow students the space to develop intellectual curiosity and joy for learning.

This is because not all students, however well they do in the PSLE, are suited for the IP.

The Ministry of Education has released some figures to The Straits Times. It said 6 per cent of students leave the IP before graduation. It also revealed that another small number - less than 5 per cent - who go on to sit the A levels or the International Baccalaureate do not do well enough to qualify for local universities.

Indeed, over the last two weeks, I spoke to over 20 students from the top IP schools who failed to thrive when undertaking the IP. None, not a single one of them, wanted to be named.

But they were open about what went wrong with their studies.

Surprisingly, those who fail to thrive on the IP are not just less academic youngsters who were taken on because of their sporting or co-curricular achievements. Several entered IP schools with Primary School Leaving Examination (PSLE) scores well above 250.

But now in hindsight, quite a few realised that they were not suited for the IP. They needed a more structured programme and needed a major examination, like the O levels, to hunker down and study.

One of them described it as being "academically adrift".

"I liked the IP. I got to do a lot of interesting things, but I also drifted - going from one interesting project to another. It hit me only when I failed my JC1 exams."

That means, annually, between 200 and 300 fail to thrive on the programme.

All this throws up the question of whether it is time for the top IP schools - the likes of RI, Hwa Chong, Nanyang Girls' High and Raffles Girls' Secondary - to openly offer both the IP and O-level track - starting straightaway from Secondary 1. They should also allow students to transfer across the two tracks.

Under the plan quietly offered currently by top IP schools like RI, students who lag behind academically are to be identified at the end of Secondary 2, and prepared for O levels over the next two years. The hope is that they would do well enough in the O levels to stay on in the school. Failing that, they can move on to another JC or a polytechnic.

The majority are students who have excelled in sports and they had made it to the school through the Direct School Admission scheme, which takes into account other abilities of students.

But it is time to be upfront about offering both schemes. RI and the other schools should give full information on both programmes and how the students performed in the final examinations. (Parents who have attended open houses at the top IP schools say they paint a rosy picture by publicising the stellar A-level results of their students. There is no mention of their O-level class, or of those who fail.)

They should also look into deploying teachers who are familiar with the O levels and good at preparing students.

Best of all, having an O-level track at schools like RI is also likely to increase the diversity of its student body. It would lead to a better mix of children entering the top IP schools, not just those with top scores and from privileged backgrounds.

A version of this article appeared in the print edition of The Straits Times on February 04, 2016, with the headline 'The O-level track of shame'. Subscribe
Topics:
More
Whatsapp Linkedin FB Messenger Telegram Reddit WeChat Pinterest Print Purchase Article Copy permalink