Eddie Barker and Chua Sian Chin were two Cabinet members drawn from Lee and Lee, Prime Minister Lee Hsien Loong recounted at the firm's 60th anniversary celebrations this week. Below is an excerpt from his speech.

In the early days, my parents and Dennis Lee worked hard to get Lee and Lee off the ground and pay the bills. My father had started off at Laycock & Ong. He spent a lot of his time representing trade unions, working often pro bono - so much time that John Laycock wrote him a letter, expressing his displeasure but in typical British understated style. They were unhappy but they put it in a polite way.

The letter was displayed at the "Remembering Lee Kuan Yew" exhibition held at the National Museum earlier this year. But in case you didn't make the exhibition or didn't see the letter, let me read it out to you because when you draft many letters, it is useful to know how to do these things.

Ong and myself have been discussing the question of members of our firm appearing in these lengthy arbitrations or commissions on wages etc. which are now all the vogue. We have been suffering from these heavily during the past few months. Coupled with the absences of so many of our qualified lawyers during March, they have left us with a backlog of purely legal work in the way of our ordinary business which cannot easily be overtaken. We have come to the conclusion that we must not take any more of these wage disputes. They can never be short, we fear, because they are always preceded by long negotiations; and we can see clearly that it is likely there will be more, perhaps many more, in the near future.

If any special case arises, the same might be specially considered by us; in that case, please let us have full information before you accept any work. 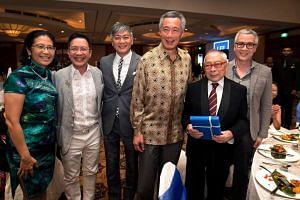 PM recounts legal legacy of the founders of Lee & Lee

This is quite a classy letter and probably played a part in the foundation of Lee and Lee!

So my father moved next door - John Laycock was probably at 11 or 12 Malacca Street - set up at 10-B Malacca Street, Lee and Lee, and took on all sorts of cases to make a living. Divorces, chap jee kee runners, routine debt collection, and he continued to be active in the unions and politics.

After he became prime minister in 1959, he tapped Lee and Lee for talent, and persuaded some of the partners to join him in politics. Eddie Barker became minister for law and drafted the Separation documents, including the Proclamation of Independence. Chua Sian Chin, who joined Lee and Lee in 1959, became a partner in 1965. And he would enter politics and become the minister for health at the age of 34, making him the youngest Cabinet minister in independent Singapore's history.

Then there was S. Ramasamy, who I think was the chief clerk at Lee and Lee, and he became legislative assemblyman for Redhill constituency. Later on after we became independent, and after Separation, he served as Member of Parliament for two terms, also for Redhill constituency. And so 60 years on, Christopher de Souza is continuing the tradition!

As my father became increasingly involved in politics, he left Lee and Lee's affairs to my mother and Dennis.

My mother regarded her husband and children as her first priority but she did her work. Every day she came home for lunch from the office so as to see her children. She would take a nap and then go back to work. When I had chicken pox - I must have been aged four or five years old - she nursed me at home, with her work files at my bedside.

On days when business was slow, she would wait for new call-in clients at the office, because in those days there were no mobile phones, and she took along her knitting to office because she loved to knit. In the evenings, she would bring home files to do and the files would come as big bundles in the open cane baskets which some of you may remember. She would stack them up and do them one by one, mostly conveyancing documents, and I would be fascinated with the documents - not with what was written inside, but what was pasted inside - because the conveyance documents and title deeds would have revenue stamps for what seemed to me like fabulous denominations; we had $500 stamps, $1,000 stamps, and also old faces because these were transactions from properties which were 30 or 40 years old, from previous reigns.

My mother would look at me and say these are not postage stamps but revenue stamps; you don't put them on envelopes!

My mother decided to do mostly solicitors' work. When Kim Li (Mrs Lee's niece) joined the firm, my mother advised her, and in fact told her "umpteen times", that "women should not do litigation because that would make them argumentative, and more difficult to find husbands!"

And I understand my mother gave the same advice to other ladies in the firm, including Kim Li's daughter, Joanna, who entered law school in 2005. I am reporting this to you as hearsay evidence, but on good authority, but of course I would never venture to offer any such advice to anybody.

My mother developed the Conveyancing Practice and the Trust and Probate Practice at Lee and Lee. Many of the clients she acted for became her friends, and remain to this day clients of the firm. She retired from partnership in 1987, nearly 30 years ago, but she stayed on as a consultant for many years after that.