While Myanmar's de facto leader reaps the benefits of her goodwill to China, there is a limit to how far her 'star power' can carry her

Myanmar State Counsellor and Foreign Minister Aung San Suu Kyi's landmark state visit to China that ended on Sunday was watched with great interest in Myanmar and abroad. By all accounts, it was successful and highlighted her pragmatic approach to foreign policy.

While serving as leader of the opposition, Ms Suu Kyi was very critical of the Chinese government because of Beijing's strong support for the military regime from 1988 to 2011. However, after assuming de facto national leadership, she has adopted a more pragmatic outlook.

She holds the realistic view that it is in Myanmar's strategic interest to maintain friendly ties with China, which is Myanmar's top trading partner and biggest foreign investor. More importantly, the two share a common border of over 2,000km, along which at least six armed ethnic groups that have not joined the Nationwide Ceasefire Agreement continue to operate.

The choice of China for Ms Suu Kyi's first non-Asean state visit was strategic. She intended to make the point that Myanmar's foreign policy would continue to take on a friendly tone. This gesture was not lost on China, which responded graciously by rolling out the red carpet and gave her a welcome befitting a head of state. It is important to remember that under president Thein Sein's government, Myanmar continued its strategic relations with China. In fact, both countries inked the Strategic Partnership Agreement in his first year in office. He also took great pains to explain that Myanmar's improved relations with the West were not motivated by anti-China sentiment. Myanmar's rapprochement with the West was driven by the push for economic reforms which required the lifting of Western economic sanctions.

In this respect, Ms Suu Kyi has had the distinct advantage of unwavering support from the West for the past two decades - an advantageous position which can now be used to draw international support for Myanmar's reform agenda. Her close ties with the West also allow her a greater degree of strategic manoeuvrability, a point that was clearly evident during the China state visit. Her "star power" and international reputation give the Myanmar leadership a lever unseen in recent memory. 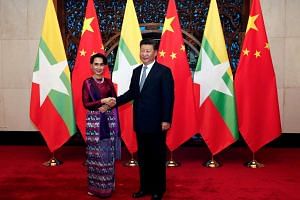 However, there is a limit to how far the Nobel Peace Prize aura and close ties with the West can carry her. In Beijing, Ms Suu Kyi showed that she is a quick learner in international politics by accommodating her host on some "core" issues. In a joint press statement, Myanmar reaffirmed its adherence to the one-China principle, and expressed its understanding and support of China's position on Taiwan, Tibet and Xinjiang. This is the first time that Myanmar has mentioned Tibet and Xinjiang in a joint statement with China. Previous administrations had only affirmed the one-China policy.

Though the Myitsone Dam project, a US$3.6 billion (S$4.9 billion) effort jointly funded by China and Myanmar, was not mentioned, it must have been an important part of the talks. The previous government did not consult its Chinese counterpart before making the decision to suspend the project in 2011. The decision took China by surprise and caused it to lose face.

Later, Western commentators frequently referred to this unilateral act as a turning point in Myanmar's struggle to free itself from Chinese influence. To China, such comments were like rubbing salt into the wound. Consequently, Myitsone has been a major source of friction between the two countries for the last four years.

China wanted a clear-cut answer on the project, but the Thein Sein government had neither the political will nor the favourable political atmosphere to decide on this sensitive issue. It is thus reassuring to Beijing that Ms Suu Kyi has indicated she is ready to tackle this problem for the mutual benefit of the two countries.

Prior to her visit, President Htin Kyaw had appointed a 20-member commission to review Myitsone and other hydro-projects. Chinese media outlets welcomed this and said more good news could be expected during Ms Suu Kyi's upcoming trip. During her interview with Chinese media, she said the task of the commission was to determine the best solution to the problem.

When she was head of the Letpadaung Taung (copper mine) Investigation Commission in 2012, it pointed out that the mine had not met global environmental or social standards and failed to provide enough compensation to villagers. However, it did not call for the shutdown of the mine. Instead, it made recommendations to enable this large Chinese project to continue. With that as an example, the Myitsone Dam commission, too, may find a solution. Even if it recommends closing down the project, it will also provide a way out for China to save face.

Already, Ms Suu Kyi is reaping the benefits of her goodwill to China. The first tangible result of this visit is the Union Peace Conference, or what has been termed the 21st Century Panglong Conference, to be held in Myanmar at the end of this month.

While playing the role of a bridge builder, China is also sending a subtle reminder to Myanmar of Beijing's central and indispensable role in the peace process. On the surface, Ms Suu Kyi may appear to have skilfully played the Chinese card for the peace conference, but it remains to be seen in the long run who is playing whom. Nevertheless, she scored a resounding success in her first major state visit, and boosted her credentials as a statesman and diplomat.

• The writer is a visiting senior fellow at the Iseas-Yusof Ishak Institute, and a former minister for information of Myanmar (2014-16).

A version of this article appeared in the print edition of The Straits Times on August 25, 2016, with the headline 'Suu Kyi and China: Who is playing whom?'. Subscribe
Topics:
More
Whatsapp Linkedin FB Messenger Telegram Reddit WeChat Pinterest Print Purchase Article Copy permalink