When Singapore General Hospital's Professor Christopher Cheng performed Prime Minister Lee Hsien Loong's prostatectomy in February 2015, he was assisted by a da Vinci robotic system that enabled the surgery to be done with greater precision and fewer complications, resulting in a shorter recovery time.

Unlike with earlier-generation industrial robots, rapid technological advancements have given rise to more compact robots that are cheaper, safer and smarter for use in unstructured environments beyond the factory floors, as typified by the da Vinci and Roomba robots.

We now find robots not only making cars, but driving them too. In future, robots could design cars. Robots capable of taking on tasks that humans can't, won't, or shouldn't do, are likely to become more common in future.

The potential of robots is phenomenal. For Singapore, robots could in future help to care for our aged, enhance our transportation, and perform currently labour-intensive services such as cleaning. They could also enhance our productivity and operational effectiveness in sectors such as manufacturing, logistics and defence.

In care for our aged, for example, prosthetic limbs controlled by thoughts could give those with physical disabilities greater dexterity and mobility to do and experience what the able-bodied take for granted.

Robots capable of interacting more naturally with humans could provide rehabilitative support and companionship to the aged. This is by no means far-fetched.

As I wrote this in June 2015, Japan's SoftBank Robotics announced that its Pepper humanoid robot sold out within a minute of its release. The 1,000 models available were sold for 198,000 yen (S$2,243), with an additional 24,600 yen in monthly data and insurance fees. 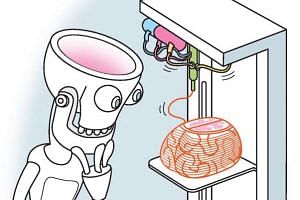 Do you still need cows, if you can 3D print beef slices?

Pepper isn't a task robot - not designed to fetch and carry - but is meant to be an emotional companion to make you happy, with cameras, touch and other sensors that can recognise and respond to tone of voice. It has facial expressions that can shift according to its "moods", or endocrine-type multi-layer neural network.

In the manufacturing and services sectors, robots that can learn from humans to perform intricate tasks have also become a reality - think of the day when we could have char kway teow or bak chor mee robo-chefs in our food centres to ensure consistency in quality in our hawker food!

In defence, we are now developing unmanned systems that can take over some of the laborious and hazardous maritime mine countermeasure tasks that are currently being undertaken by manned ships in our Navy.

Our universities, polytechnics, research institutes, defence laboratories and industry have been undertaking R&D in robotics over the years. Building on these capabilities, we can go beyond being a consumer to become a developer of a new generation of smarter and more autonomous robotics technologies, systems and solutions.

About a year ago, I chaired a robotics R&D task force convened by the National Research Foundation. We recommended a multi-pronged strategy for the build-up of an ecosystem, to prepare Singapore for a robotics-rich future.

Let me highlight four initiatives here. First, it is important that we invest in public sector R&D in robotics in a more coherent and coordinated manner, while ensuring that our researchers continue to have the space to dream and explore.

Second, to maximise R&D translation to meet national needs and/or generate economic value, our test-bedding efforts should go beyond technologies to the testing and experimentation of policies, regulations and standards as well.

We need to address related issues that pave the way for robots to be integrated more seamlessly into our society, such as robotics safety, security and ethics.

Third, industry involvement will be critical in our robotics effort. Lead users should be identified early to better align R&D with market requirements. Where possible, industry partners should be brought in early to take the lead in solutions development and systems integration.

Last but not least, we should also create the environment for Singapore to be a place for international researchers, venture capitalists, start-ups, companies and entrepreneurs in robotics to flourish. We need to nurture and grow a pool of roboticists who are able to develop novel robotics solutions.

Many of our kids are fascinated by robots. How do we convert their interest into a passion to tinker with robots for a better society even when they grow up?

That Singapore will be a major user of robotics is probably inevitable. What is less inevitable is whether we go beyond surfing the wave to shaping it as well. I believe that we should, and we can.