Politics in Malaysia gets stranger with each passing day. As the adage goes, truth is stranger than fiction, and it seems to apply well here.

Shortly after the general election in May, when the Barisan Nasional was trounced and consigned to the scrap heap, then acting Umno president Zahid Hamidi raised eyebrows when he called on Tun Dr Mahathir Mohamad for advice.

Dr Mahathir revealed that Datuk Seri Zahid "wanted to know how to manage Umno. So, I was frank and said Umno had betrayed the Malays".

Yes, at least that's what the man said. Mr Zahid wanted advice on how to manage Umno and he got it from the best man possible.

"I reminded him that we formed Umno to help the Malays, but that Umno had changed and prioritised self-wealth.

"Because of that, Umno is now hated. It'll be hard for Umno to recover. Once seen as noble, now viewed with disgust," Dr Mahathir apparently said.

Incredibly, Mr Zahid was not the only loser who queued up to acquire Dr Mahathir's wisdom. He was, in fact, the third opposition party leader to do so, believe it or not.

Forgive our naivety in politics, but are we missing something here? These people had just lost the election, leaving their parties in disarray (at least Umno), and the first thing they do is run to the man who defeated them for advice on how to run their own houses?

Are we reading this right? But then, this is Bolehland, and what is regarded as strange can easily be real. 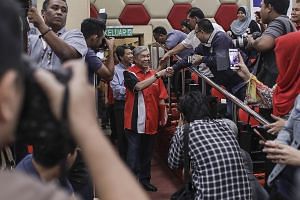 Last week, another top Umno name - Datuk Seri Hishammuddin Hussein Onn - also scooted off to see the nation's foremost nonagenarian. It's uncertain if the purpose of his visit was, likewise, to learn how to save Umno and run the party. Honestly, why would Dr Mahathir, even as former president, want to save Umno?

No one would have known better had Datuk Kadir Jasin, the media adviser to the Prime Minister, not let the cat out of the bag about the meeting.

Presumably caught off guard by the revelation, Mr Hishammuddin, who is also a former Umno vice-president, however said the meeting was only to listen to Dr Mahathir's plans for the country's future.

Mr Zahidi, who is Padang Besar MP, said the purpose of the discussions was to seek the "best option to save the Malays".

"We are trying to discuss with PPBM to save the Malays. We want PAS, but PAS is not ready, so we are looking for the best option because we want the best for the Malays," he said.

According to him, Barisan MPs met PPBM leaders two to three months ago, but he refused to disclose details. However, he said: "We are planning to merge with PPBM but we do not want to quit Umno.

Dispensing with the bravado and hyperbole, what Mr Zahidi is trying to convey is simply that Umno is in trouble and going nowhere. We want PPBM or PKR to hold us, we can't just quit Umno, but without the two parties, we are dead.

And of course, the narrative must be about saving the Malays - not saving ourselves politically.

Meanwhile, in Bolehland, the Chinese and Indians are upset that Datuk Seri Anwar Ibrahim is said to be drumming up support by doing a devil's deal with some Umno MPs to overthrow Dr Mahathir by November.

Why November? Well, that's when Parliament meets, but that's what a friend of a friend told me. I didn't ask why November either because that seemed like an insignificant detail. 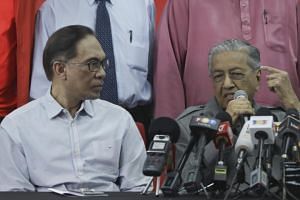 Not easy to be PM now, says Anwar

So, here's when many of us become confused: Who is cosying up to Umno? Is it Dr Mahathir to checkmate the ever-impatient Mr Anwar, or is it really Mr Anwar himself? Now, this is when the truth gets stranger than fiction, or so it seems.

But dig deeper, and it sounds more like a group of Umno MPs - who find the gravy train now derailed, and without benefit in sight - cooking up a juicy story to let the various insecure factions in Pakatan Harapan fight over them, for what they are still worth as MPs.

And if nothing is offered, what can be more pleasing to the egos than be heralded as the saviour of the race and religion at this week's party assembly for their undying proclamation to the party, race and religion?

But don't be too quick to dismiss the story. It's only a story, so far, and it hasn't ended. Whether it's fiction or otherwise, it will always be strange because this is Malaysia.

It's only in Malaysia where one runs off to his enemy for advice! Malaysia Truly Amazing.