Singapore's relations with China are in the spotlight, following a series of spats with the rising power. One writer calls on Singapore to be more understanding of China and step away from the embrace of the United States, while the other says Singapore is both pro-China and pro-US and should not change.

Singapore's foreign policy has come under the microscope in the past year. The Republic was singled out by China for its forthright position on the South China Sea disputes. Last September, a People's Liberation Army (PLA) major-general said Singapore was "playing off" big countries (read: China and the United States) against each other, and proposed that China slap some form of sanctions on the Republic.

Not to be left out, the strident Global Times said Singapore had "fully embraced the Western world" and had displayed no brotherly affection towards Beijing. It called for Beijing to be tough on Singapore when it "crosses the line".

The pressure from Beijing culminated last November, with Hong Kong's seizure of nine Terrex infantry combat vehicles en route to Singapore from Taiwan. The vehicles have yet to be returned - what many see to be Beijing's displeasure with Singapore.

Unsurprisingly, some Singaporeans are concerned about the future of Singapore-China ties in the face of such pressures.

There have been calls for Singapore and its diplomats to get a better understanding of the Chinese point of view. Some commentators also propose that Singapore recalibrate its position to seek to be more accommodating of China, and to distance itself from America. 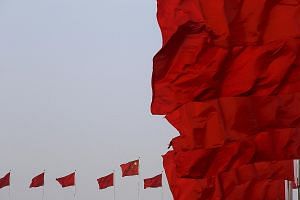 Time for Singapore to move away from Uncle Sam's embrace?

Such a new approach is, however, unwarranted. It is fair to say that Singapore's foreign policy elite, many of whom were schooled in the West, should work harder at understanding China's perspectives. This is especially as China's emergence and growing reach will cast an even longer shadow on the Asia-Pacific and the world in the years to come.

But as Britain's 19th-century prime minister Lord Palmerston has said, countries have no permanent friends; they have only permanent interests. Even an acute insight into the Chinese perspective does not guarantee that Singapore will support the former's policies in toto.

Take Mr Kevin Rudd, Australia's prime minister from 2007 to 2010. He trained at the Australian National University with majors in Chinese language and history, and was the archetypal Sinophile that even Chinese media outlets gushed over. Still, his concept of Australia being China's zhengyou - a true friend who offers "unflinching advice and counsels restraint in principled dialogue about matters of contention" - did not win him many fans in China.

In 2009, Sino-Australian relations hit a nadir after China reacted angrily to an Australian defence White Paper singling out PLA military modernisation as a "cause for concern".Mr Rudd called on regional countries to engage China multilaterally and advised the US to deploy force if things went pear-shaped.

What about the suggestion that Singapore distance itself from America and be more accommodating towards China?

The fact is that Singapore's foreign policy was never based on an "either-or" trade-off. Singapore always sought to chart an independent course, where it was not allied with or aligned to any major power.

Speaking to the Asahi Shimbun in 2010, former prime minister Lee Kuan Yew said Singapore had never sought to conscribe (zhiheng) China. Rather, Singapore sought to effect a balance (pingheng) in the Pacific, based on the presence of American power.

To invoke Lord Palmerston, Singapore has always had pro-US and pro-China policies because such policies were ultimately pro-Singapore.

After the US military was booted out of Philippine bases in the early 1990s, Singapore offered the US access to naval facilities at Changi Naval Base - direct recognition that the US military presence supports regional stability. The two countries signed a landmark free trade agreement in 2003 and are partners in the Trans-Pacific Partnership (TPP).

At the same time, Singapore has blazed the trail in its relations with China. Sino-Singapore relations hit a high point in November 2015. To commemorate 25 years of diplomatic relations, both sides pledged 19 initiatives to deepen cooperation. Singapore is China's top foreign investor. It is a firm supporter of the Asian Infrastructure Investment Bank and the Belt and Road Initiative - two China-led projects that have drawn little American interest.

Given the even tenor of ties , some have asked why Singapore should choose to upset them. Why not keep a discreet silence on the arbitration tribunal ruling against China's claims when it is, after all, not a claimant to any of the disputed South China Sea features?

But the fact is that China's insistence that it would not recognise the arbitration tribunal decision of last July undermines regional order - the very oxygen needed for small states such as Singapore to survive. The tribunal decision declared, among other things, that China's claim of "historic rights" to the South China Sea is incompatible with the United Nations Convention on the Law of the Sea.

There is emerging hubris in Chinese policy circles over China's emergence as a great power and the concurrent decline of the US. As one well-connected Chinese interlocutor opined recently, no one should "push China around", even on contentious issues such as the South China Sea.

Amid such hubris, some countries have already succumbed to the temptation of bagging all the economic carrots that China has to offer, in exchange for a softer stance on the South China Sea.

In a recent visit to Beijing, for example, Malaysian Prime Minister Najib Razak was granted a red carpet welcome. A Chinese firm was granted a US$13 billion (S$18.6 billion) contract to build a 620km rail link to Kuala Lumpur; Malaysia agreed to buy four Chinese naval vessels and both countries agreed to settle the South China Sea dispute bilaterally.

A studied silence on the need to adhere to international law in the South China Sea dispute is a recipe for disaster for a small, trade-dependent nation such as Singapore.

There is no magic formula for Singapore to manage the triangle of relations with the US and China. The rule of thumb should be what has always worked - seeking to ensure there is a stable balance between the two great powers in the Pacific.

Given the inclination of the incoming Trump administration in America to turn inward, Singapore should recognise that Chinese President Xi Jinping's call for an "Asia for Asians" concept has some salience. Specifically, given President-elect Donald Trump's inclination to ditch the TPP, the Regional Comprehensive Economic Partnership involving China would be a trade deal worth concluding. Yet this is adaptation, not accommodation.

In the journal Survival, in an article titled Standing Up To China, Dr Tim Huxley and Professor Ben Schreer argue that Asean countries should convey the message to China that its regional policies have been counterproductive and risk long-term estrangement from the rest of the region. "The more strongly China asserts itself in a way that regional states find threatening, the more likely it is that Beijing's worst-case scenario of encirclement by the US and its allies could become a reality."

There is no evidence of encirclement yet, but there are stirrings. Countries such as Australia, India, Japan and the US have spoken about joint patrols of the South China Sea. The US and Japan have effected measures to help littoral countries improve their domain awareness of their maritime areas.

As Professor Tommy Koh, Singapore's ambassador-at-large, has noted, tensions between the US and China have made it difficult for Singapore, which has good ties with both, not to choose sides.

A US Navy admiral describes it more vividly - the tightrope Singapore walks between the two powers has narrowed. Singapore will want to maintain its position of being friends with all powers, and of working with Asean to maintain a balance of power, for as long as it can. Its principled position might impose costs in the short term, but in the longer term, the net gain would be greater stability in the region - all the more reason for Singapore to stay the course.