The great plastic binge, which started with the appearance of plastic grocery bags in the United States in 1979, is expected to leave the planet reeling for hundreds of years. Standard polyethylene bags do not biodegrade like, say, farm produce. Such plastic photodegrades in sunlight but when sealed in landfills, they are in effect mummified in "trash tombs". When plastics wind up in warm oceans, they generally break up into toxic bits that sea creatures ingest or pollute shorelines.

Certain groups of chemicals in plastics, like phthalates, can cause cancer in animals and humans. Bisphenol A, which is found in polycarbonate plastics, could disrupt the human hormone system. And the burning of polyvinyl chloride, found in food wrap and food containers, releases dioxins that are environmental pollutants.

The utility of plastic is not doubted but overuse is creating gigantic problems that simply cannot be ignored. The British sought to tackle the scourge by focusing on single-use plastic bags in the hands of shoppers. A small charge of five pence (about nine Singapore cents) was levied on each bag. This astonishingly led to a reduction of over 85 per cent in their number, as reported last year. In absolute terms, some six billion plastic bags were taken out of circulation that, if laid end to end, would stretch 75 times around the world, noted The Guardian. 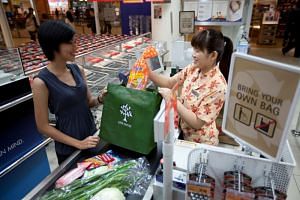 Supermarkets in talks to charge for plastic bags

Price of curbing plastic bag use

3 billion plastic bags a year? Cut use with mandatory tax

This should spur the supermarket chains here to press on with plans to levy a surcharge for plastic bags. As long as these remain free, there will be little incentive to reuse the bags. But if a society charges for standard plastic bags while offering free larger tote bags bearing commercial logos, that would defeat the purpose of the initiative. The goal must be to get people to reuse a bag as much as possible to reduce its attributable carbon footprint. It would be ironical if free tote bags, from corporates striving for a green image, become the ones that fill dumps and get into seas.