With physical trade possibly declining, Singapore can expand and license its digital trade platform to global users. It can become a free data port as well.

Singapore's strategic location has helped the island nation become a hub for global trade. But with digital technologies changing the nature of trade, Singapore's locational and infrastructural advantages may no longer be as strong a control point as they were in the past. Singapore must reinvent itself as a hub for the age of digital trade.

And in the modern world dominated by platform companies that offer ways for customers and companies to connect with one another, Singapore must think like a platform nation.

It can make use of its innate advantages to develop ways for other nations and industries to connect through it digitally.

Today, digital technologies are changing the nature of globalisation in two important ways. First, automation of manufacturing is moving manufacturing back west. Adidas, for example, is moving production from China to Germany, owing to the lower cost of robotic manufacturing in Germany. As Western companies re-shore manufacturing, East-West physical trade flows, including the ones moving through Singapore's hub, are likely to go down.

Second, global SME (small and medium-sized enterprise) trade is on the rise, driven by the rapid growth of digital platforms such as Alibaba and Tencent, which allow much smaller enterprises to participate in global trade without the need to invest in their own supply chains.

As these platforms scale further, we may see control over trade shifting from political countries to these digital platforms.

In this changing landscape, Singapore needs to re-imagine its position as a hub, and leverage its current strength in physical trade and its position of neutral governance to create new control points for digital trade.

To formulate these new control points, Singapore must think like a digital platform. To understand this better, let us consider how Google succeeded in dominating the smartphone industry with the Android platform.

Google used a three-pronged strategy. First, it drove the adoption of Android among smartphone manufacturers such as Samsung by open-sourcing the operating system. This was Google's entry strategy.

Second, it controlled unique IP (intellectual property) in the form of Google Maps and the Google Play app store. This IP served as Google's key differentiator. Every smartphone manufacturer needed to license this IP. Google continues to invest in improving its mapping data and growing its app store as these two sources of IP make Android more attractive as the standard.

Third, Google leveraged its neutral position in the smartphone industry - as a non-manufacturer - to allay competitive fears among manufacturers who were using Android.

This three-pronged strategy - an adoption strategy with partners, control of unique IP, and the benefits of a neutral position - established Android as the dominant standard. 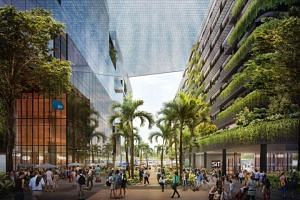 Much like Google's strategy outlined above, Singapore's road map to establishing a standard will involve an adoption strategy with partners, control of unique IP differentiators, and the benefits of a neutral position.

We elaborate further on these three initiatives below.

The first part of the three-pronged strategy serves as the entry point.

One such entry point could be digital SME trade, which has been growing with the rise of digital platforms. In the first quarter of this year, Singapore will launch its own SME trade platform, built on the blockchain, to allow SMEs to conduct digital commerce securely and seek new business partners and distributors, while managing a common audit trail between counterparties on the platform.

In the first instance, this platform allows Singapore SMEs to participate in digital commerce and grow their businesses. However, it can also serve as an entry point towards a larger strategy.

Once the success of the SME trade platform is demonstrated within Singapore, the country could open its platform technology, know-how and processes to emerging economies that are seeking growth driven by digital SME trade. These partner countries understand the importance of digital SME trade but do not have the capabilities to create such a platform, nor do they want their SME sector to become over-reliant on commercial platforms such as Amazon and Alibaba. When multiple countries start using the same platform, they start subscribing to the same data standards, leading to greater cooperation and interoperability among them.

This serves as a first step towards creating a standard for collaboration in digital trade. However, it does not yet position Singapore as the hub. This leads us to the second part of the three-pronged strategy.

Singapore already has a head start here with its financial technology (fintech) strategy. By creating a regulatory sandbox, the country is already encouraging innovation in fintech.

The fintech innovations emerging from Singapore can be used as value-add plug-ins to the SME trade platform.

For example, a data-driven credit scoring system could be used to extend trade financing to SMEs based on their trade activity data gathered on the platform. Similarly, insurance premiums for trade shipments could be personalised based on proprietary data from the platform. Other countries using the platform may not possess the technology or financial infrastructure to build these capabilities themselves, making the platform even more attractive for them to adopt.

As more countries use the platform, other IP creators could find it more attractive to create IP for this platform, owing to the higher demand. This growing IP, in turn, leads to greater usage of the platform. This creates a virtuous circle.

This would position Singapore as the central and most powerful point for processing digital trade data from participating countries, making it a hub for digital trade.

This IP creates a unique and inimitable differentiator. It also allows Singapore to monetise digital trade activity in other countries, positioning it as a virtual hub over trade flows.

3. Become a free data port and set a standard for digital trade

As Singapore becomes the hub for digital trade, it can also leverage its neutral position to allay fears among partner countries.

In the past, Singapore's creation of a free trade port attracted physical trade flows to the country. We believe that Singapore would be well served by establishing a similar free data port that positions it as a neutral country for processing global trade data.

A free data port - an idea also proposed by former civil service head Peter Ho at the IPS-Nathan Lectures last May - would allow data from other countries to be stored and processed in Singapore, but in accordance with their individual country-specific data jurisdictions.

We believe this three-pronged strategy will help Singapore to establish a standard for digital trade. As locational advantages become less relevant in a digital world, Singapore can re-position itself as a hub by constantly investing in and controlling unique IP that other trading countries value, while maintaining a neutral stance through a free data port.

There are a few specific nuances to consider here. First, digital trade allows Singapore to be location-agnostic. In physical trade, Singapore benefited only from trade flows towards Asean. But in digital trade, the SME platform could be licensed to small nations in Africa, Central America and Eastern Europe.

We believe that Singapore's head start with fintech IP, coupled with its neutral stance as a free data port, will make the SME platform attractive.

Second, in addition to providing a free data port, Singapore could also act as the neutral convener and facilitator for driving digital and data policies across participating countries. To the extent that many of these countries are emerging economies and have still not fully evolved their data policies, this proactive facilitation further strengthens Singapore's position as a neutral hub.

Third, to be a strong hub for digital trade, Singapore must continue to invest heavily in machine learning and data-analytic capabilities to gain intelligence from global trade data flows.

On a final note, physical trade will continue to be important as well. In addition to preparing for digital trade, the country should strengthen its hub position in physical flows by capturing and controlling important data.

For example, one way to exert greater control over supply chains may involve digitising warehouses and other supply-chain assets across South-east Asia.

While others try to compete with the port only at a physical level, this could enable the country to combine flows through the port with these new data points to exert more control over the supply chain and make itself a preferred port.

We are entering a new phase of globalisation, where digital technologies rapidly change the nature of trade. With the starting points of this strategy in place, Singapore is well positioned to create a hub for trade in this new world across physical and digital trade. But to succeed in this new phase, the country needs to think like a digital platform.

A version of this article appeared in the print edition of The Straits Times on February 14, 2018, with the headline 'S'pore must think like a platform to thrive as a digital hub'. Subscribe
Topics:
More
Whatsapp Linkedin FB Messenger Telegram Reddit WeChat Pinterest Print Purchase Article Copy permalink