It is the most globalised city state, affected in some way by every tremor outside its shores.

External trade is nearly three times its gross domestic product. It receives twice the number of its resident population every year as tourists.

Among all the Asian nations studied in a recent Bloomberg survey for their exposure to the Chinese economy, Singapore tops the list.

How does tiny Singapore cope with the effects of a Chinese economy whose growth has markedly slowed? A region where the cross- currents of globalisation, now topped with a heavy dose of automation of industry and robotisation of the workplace that, combined with digitisation, is proving so disruptive everywhere?

The challenges are real but not insurmountable. Take China. The coastal regions that saw the first boom and big urban centres such as Beijing and Shanghai may be seeing a slowdown, but the western and inland regions of the vast nation still have capacity to grow. IE Singapore, for instance, is plugging into the Chongqing Connectivity Initiative precisely for this reason, seeking to parlay its strengths in connectivity, information and communications technology, aviation and financial services to find useful pickings.

Professor Kishore Mahbubani of the Lee Kuan Yew School of Public Policy says Singapore is making a big mistake in not paying more attention to its South-east Asian neighbourhood.

India, likewise. The Modi government's initiatives such as Digital India, Make in India and Smart Cities all hold good prospects, to say nothing of its recent success in steering the goods and services tax legislation that promises to turn India into a unified market.

"We want to generate demand for our companies' products and services. So we educate the Indian market about our offerings. Second, we identify landing zones in key states for possible manufacturing sites. Likewise, South-east Asia is both a manufacturing and consumption base."

South-east Asia, rapidly integrating despite the political ruffles that dominate the headlines, is another region poised for decades of growth as big new markets like Vietnam and Myanmar open up for all sorts of services and goods.

The key, of course, is to have a fine grasp of the region's workings. That's something Singaporeans, many of whom are more familiar with the Appalachian mountains of the United States rather than the Visayas of the Philippines, have to learn to master. 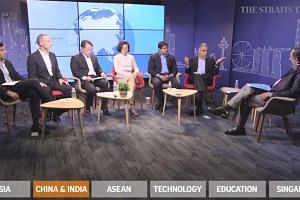 ST Future Economy Roundtable: The outlook is bright but for a few worry lines

Professor Kishore Mahbubani of the Lee Kuan Yew School of Public Policy says Singapore is making a big mistake in not paying more attention to its South-east Asian neighbourhood.

"The consuming classes are going to explode in South-east Asia," he says. "There's a tremendous demand out there for things that Singapore is very good at but we have Singaporeans whose knowledge of South-east Asia is so bad. I don't mean just book knowledge. It is also about how you deal with people. If we don't rectify it soon, the world's biggest market is going to emerge and Singaporeans are going to look very bewildered."

All that is about tapping opportunities with established skills. What of the emerging technologies such as digitisation and 3D printing and the massive use of robotics?

Mr Johan de Villiers, South-east Asia managing director for engineering giant ABB, says the island's strengths in electronics manufacturing give it an advantage in playing in the digital space, as witnessed in the growth in data centres and the nation's ability to attract software players. That will be the time when robots communicate with one another and entire manufacturing plants are automated.

Already, some jobs hitherto unthinkable are being performed on the island.

Mr de Villiers cites the example of ABB's integrated operations centre based in Singapore that looks at a whole fleet of ships around the world, whose maintenance is controlled remotely from here in real time.

"We look at weather patterns, wave patterns and the loading profile of the ship, and tell each of these ships which direction to sail and at what speed so as to reach their destination with the lowest energy consumption," he says. "That's just one very real example of how the location of jobs has changed. You cannot nationalise these jobs and prevent them from happening in other places."

A version of this article appeared in the print edition of The Sunday Times on August 21, 2016, with the headline 'S'pore in a digitised world '. Subscribe
Topics:
More
Whatsapp Linkedin FB Messenger Telegram Reddit WeChat Pinterest Print Purchase Article Copy permalink