Singapore's relations with China are in the spotlight, following a series of spats with the rising power. One writer calls on Singapore to be more understanding of China and step away from the embrace of the United States, while the other says Singapore is both pro-China and pro-US and should not change.

The Singapore-China relationship today is at a crossroads.

Where it goes from here depends on the wisdom of both Singapore's and China's leaders.

Singapore's foreign policy has been shaped by its geopolitics and past. After independence in 1965, the city-state joined the Non-Aligned Movement - a group dedicated to neutrality and non-alignment with any major power bloc in the Cold War.

Singapore's security concerns throughout its early years of independence were bolstered by the Five Power Defence Arrangements under which the United Kingdom, Australia, New Zealand, Malaysia and Singapore agreed to mutual consultations in the event of military threats.

Since its inception, Singapore has taken steps to assert that though it is a city-state with a Chinese-majority (75 per cent) population, hemmed in by two large Muslim-majority nations, it would not be a "Third China". Singapore was also the last of the original five Asean nations to establish diplomatic relations with China in October 1990.

Singapore's policy of being friends with all powers is vital for its survival as a small nation-state. Its leaders have also repeatedly stressed the importance of having a proper balance of power in the region, and keeping America engaged to balance East Asia's large powers, especially China.

But today, Singapore is perceived by some as being too close to the US and as being unfriendly to China.

A pivotal change took place in 1992, when the Philippines closed Subic Bay naval base, a longstanding US military naval base that was America's largest military base outside of Okinawa and Guam. Singapore offered the Americans the use of logistics facilities to accommodate, service and repair US naval ships - an offer that was taken up.

In 1992, the US was at its peak powers, militarily, economically and politically. The Soviet Union had just disintegrated, the threat of worldwide communism had diminished and the US boasted relatively high economic growth that enabled national debt to be kept at fairly low levels.

It may be wise to remember that Singapore is a small city-state whose prosperity depends not only on the immediate region but also on the world at large. In that respect, it can take a leaf from Indonesia's foreign policy book of "equi-distance vis-a-vis the superpowers". 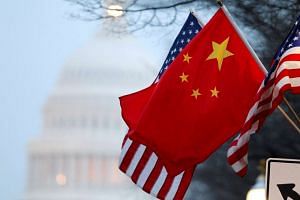 Staying friends with all powers works best for small nations

Singapore's strategic foreign policy moves to welcome the US appeared prescient and rested on solid grounds.

In contrast, China during the 1990s was a relatively small player in international trade and finance - having just implemented the economic reforms advocated by Deng Xiaoping. It was hampered by the Tiananmen crackdown in 1989 that resulted in the US and the European Union imposing various sanctions. Talk of China's rise would have appeared purely academic.

Various factors, including the rise of terrorism, the impact of globalisation and its unequal fruits, and the volatile economy and its multiple financial crises, have contributed to debt-fuelled America's decline.

Meanwhile China's economy roared ahead registering double-digit growth rates for over two decades from 1992 to 2014. Today, China is the largest or second-largest trade partner of practically every Asean member (and many countries worldwide), and China's foreign currency reserves are well in excess of US$3 trillion (S$4.3 trillion). China's economic strength has eclipsed that of the US.

China's stupendous economic growth has enabled it to spend large sums on its military. Today, China has the world's second-largest economy and its People's Liberation Army forces are second only to the US in the Asia-Pacific region.

Singapore, like the US, has called on China to accept the decision of the tribunal. This has irked China, which sees it as evidence of the city-state siding with the US.

China's response and displeasure with Singapore have, however, been measured and low key. It is clear from the recent series of spats between Singapore and China - whether these were endorsed by Beijing or not - that all is not well in the garden of bilateral ties.

Examples include the Global Times' accusation that Singapore sought to raise the South China Sea issue at the Non-Aligned Movement Summit in Venezuela last September - a charge Singapore denied. Then, in November, Hong Kong Customs detained nine Terrex Infantry Carrier Vehicles belonging to the Singapore Armed Forces that were on board a container ship en route from Taiwan, where they were used for military training, back to Singapore. The vehicles remain in Hong Kong Customs' custody.

Regardless of whether the incidents were carried out with Beijing's approval, the fact remains that one should not underestimate China's potential to hurt the Republic if it wishes.

For example, Chinese investors are key backers for a competing port in Malacca. The RM12.5 billion (S$4 billion) Kuala Linggi International Port project could eventually lead to a Chinese naval presence in the region. China's ships currently berthing in Singapore could also easily divert to the Malacca port in future. While this may not greatly impact PSA Singapore's bottom line, its importance to China is significantly reduced.

China is Singapore's largest trade partner and one of its largest sources of inbound tourism: The possibilities of reductions in either should not be underestimated should relations deteriorate.

Already Thailand and the Philippines, both staunch military allies of the US, have recalibrated their foreign policies to be closer to China, while Cambodia, Laos and Myanmar want closer economic integration with China and view the South China Sea dispute as a distraction. Malaysia, meanwhile, is cosying up to China, which is prepared to invest large sums of money in the country as a quid pro quo.

Should Singapore engineer a shift away from its de facto military pact with the US? If so, what next?

To answer the question, it may be wise to remember that Singapore is a small city-state whose prosperity depends not only on the immediate region, but also on the world at large.

In that respect it can take a leaf from Indonesia's foreign policy book of "equi-distance vis-a-vis the superpowers".

Singapore's journey away from the embrace of Uncle Sam should be gradual and graceful. It will not be easy but it must be done - for the sake of future generations of Singaporeans who must live in a new world.

Singapore's concerns over Malay/Islamic chauvinism will recede as Asean plays a more integral role in security considerations and China becomes the new superpower that the Asean neighbourhood must learn to live with.

While China sceptics may disagree, I think China will be a benign superpower as evidenced by its largesse not only to various Asean nations but also to many countries in Africa and Latin America.

It is time for Singapore - like the Philippines - to chart a fresh course in its foreign policies. As Singapore likes to describe itself - it is a country with its soul in the past and its head in the future.

A version of this article appeared in the print edition of The Straits Times on January 07, 2017, with the headline 'Time for Singapore to move away from Uncle Sam's embrace?'. Subscribe
Topics:
More
Whatsapp Linkedin FB Messenger Telegram Reddit WeChat Pinterest Print Purchase Article Copy permalink