While waiting for new trains, a new third rail and other upgrades to the MRT system, the rail operator needs to improve the way it manages breakdowns. Urgently.

The massive breakdown three weeks ago of the North-South and East-West MRT lines would no doubt have riled many commuters.

More than 250,000 were affected when trains on Singapore's two longest and most heavily used lines were halted for more than two hours during the evening peak on July 7.

There were several accounts of people not managing to reach home until close to midnight, and some by walking. That it came on the back of a spate of recent major incidents would have knocked the confidence of even the most ardent rail supporters.

In the first quarter of this year , there were five major service disruptions, each lasting more than 30 minutes. These excluded a fire that stopped the Bukit Panjang LRT service for 24 hours.

And that came on the back of 12 such disruptions last year - more than the 11 in 2011, the year that rail breakdowns rippled across the corporate and political spheres.

Even so, a Londoner in Singapore would probably be puzzled why these incidents get people into such a tizzy. In London, if the network is operating 100 per cent, it makes news.

And it is not uncommon for Singaporeans to hear praises from visitors about our public transport system. Adjectives like "excellent", "reliable" and "brilliant" are sprinkled liberally in their comments.

Are we talking about the same system? In essence, we are not.

Visitors do not always take the train during peak periods. And if you are a tourist, your perception of time is slightly different. You look at the country which you are visiting through somewhat rose-tinted glasses.

While it is true that locals tend not to appreciate what they have, and that they often see greener grass elsewhere, there are valid reasons why people seem to be so unhappy with the MRT (and LRT) of late.

First, satisfaction is, by and large, a function of expectations. When then Communications Minister Mah Bow Tan promised Singaporeans in 1995 that they would have a world-class land transport system, it set expectations fairly high. 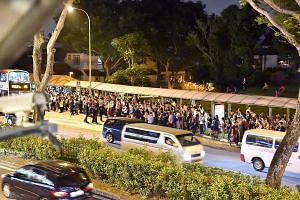 And for a while, it looked like the promise was being delivered. The MRT network was relatively new and humming along, and new lines were announced.

But when the transport regulators and operators failed to plan for a population explosion that took place between 2000 and 2010 (when one million more people arrived and stayed), things began to unravel.

Trains (and buses) became a lot more crowded, seemingly overnight. The system itself began to literally buckle under the strain.

While a commuter on the North-South Line north of Yishun might have been able to get a seat even during the morning peak time before, an empty seat on an MRT train today - even during off-peak time - is a rarity. To make things worse, breakdowns began to climb.

But trains are packed during peak hours everywhere in the world, right? Tokyo is infamous for having station staff shove commuters into already crowded carriages.

I asked a Japanese government official whom I met recently whether people were happy with how crowded the trains were in Tokyo. He said no.

But the trains were extremely reliable and speedy. You could set your watch to train arrivals (for that matter, bus arrivals) in Tokyo. Disruptions caused by mechanical faults are almost unheard of (although there are delays caused by people who kill themselves by jumping onto the track).

The high reliability helps Tokyo-ites bear with the crowdedness better.

How did the Japanese achieve such excellence? First, they built an impeccably robust system, with lots of inherent redundancy. So, even if one system failed, the operators could switch to another.

Next, their maintenance regimen. In a major overhaul, a train is stripped down completely, and individual components are inspected, cleaned (even polished) and replaced if necessary.

Those who have visited the engineering department say it was impossible to tell a reconditioned wheel from a brand-new one.

Also, they have a well-trained battalion of employees who take pride in what they do.

But back to Singapore. The MRT lines here are mostly less than 30 years old. The Tokyo subway is 88 years old, New York's is 111 and London's is around 150.

And the network here is comparatively short, too. So, it is understandable that people are peeved about the rate of breakdowns here, when our system is an infant compared with those in cities like London, New York, Tokyo and Paris. 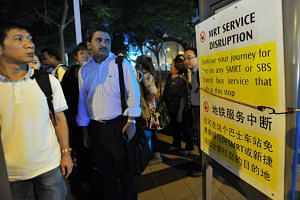 These excuses don't exactly fly with Singaporeans, who are reasonably well educated and well travelled. Not when lacklustre maintenance has been found to be the cause of many breakdowns.

And not especially when the alternative to public transport is so costly, and beyond the reach of most households.

In such an environment, it is within reason that commuters' expectations are high. And when breakdowns occur (along with other glitches and discomfort like weak air-con and unserviceable escalators that are not captured in publicly available stats), they feel let down.

Yet, the public transport satisfaction survey which the Land Transport Authority commissions yearly seems to suggest a high level of satisfaction (over 90 per cent).

Last year, the poll found that satisfaction with rail improved by about four percentage points - reversing a four-year decline.

A couple of things to note about the survey. First, it was done in October, the least eventful quarter for disruptions last year. It was also just before the spate of incidents in the first quarter of this year.

Second, a score of above six (out of 10) qualifies as "satisfied". Attributes like safety garnered relatively high scores, but others such as waiting time, reliability and travel time garnered less than seven points.

So, satisfaction is not an absolute measure. Nor is it static. But the poll is nonetheless a useful tool in gauging whether sentiment has improved or not year to year.

On the ground, the individual commuter may well have a different experience from what the survey seems to depict.

Given the massive effort that operator SMRT Corp and regulator Land Transport Authority (LTA) are expending to fix the network, it will take a few more years before the vast majority of commuters see a noticeable improvement.

•Most of the new trains will be injected into the system only next year.

•Resignalling (which allows trains to run at higher frequency) on the North-South Line will be completed next year, and on the East-West Line, by 2018.

•The third rail, which supplies power to the trains, is being replaced on both lines. The tender has been awarded, and work will probably start on the North-South Line, since sleeper replacement on the East-West Line has just started. Sleepers support the steel rails, and ensure good wheel alignment. Deteriorated sleepers can, in the extreme, lead to derailment.

Given that it will take a few years for these upgrades to be in place, it would be good if SMRT and LTA can prepare themselves for the next major breakdown.

Going by how the July 7 incident was handled, it was a shoddy effort. For a breakdown of that scale, all bus rides should be free of charge - regardless of whether commuters were directly affected by the incident.

Much of the evening's confusion and delays arose because commuters did not know which buses were free and which were not.

Taxi fares should be halved, and companies like Uber, which jacked up fares by five- to sixfold, taken to task.

A massive breakdown in public transport during peak hours, while not a national crisis, can easily spiral into a public order situation, as anxiety and emotions rise in a confusing situation. The regulator should be much more proactive in working with transport operators on contingency options.

They can all quibble about how the bill is split later. The urgency of the moment must be to get people to clear bottlenecks around stalled trains, and help them get to their destinations as smoothly, quickly and cheaply as possible.

The other hitch is fare refund.

People affected by the unprecedented breakdown formed long queues to get their refund. This also contributed to the congestion and to the overall confusion.

Modern fare systems elsewhere in the world have a so-called "white list" feature, where a refund is automatically given the next time a stored value card is used. This is not only infinitely more efficient than queueing for something that is rightfully yours in the first place, but it also ensures that every affected commuter gets a refund.

This is not rocket science.

Yet our inability to cope well with major breakdowns is demonstrated time and again.

This must stop, the next time trains ground to a halt.