Why should we pay attention to the longer and deeper history of Singapore that reaches back several centuries? Sceptics might argue that the present-day global city state has nothing in common with the settlement - or settlements - of the more distant past.

But is that so?

The study of Singapore's history across the past seven centuries yields a series of insights about key continuities and discontinuities. There are two worth highlighting here: First, Singapore was and remains today a contested space. Second, Singapore played different roles and served different functions across the centuries. These now merit further elaboration.

Singapore is geographically situated along a key maritime artery that links the South China Sea with the Bay of Bengal. Just as in earlier times, the Singapore and Malacca straits today represent the most important maritime arteries in the region and indeed globally.

The straits define Singapore strategically. This latter expression should be understood beyond a narrower military understanding: Strategic here refers to a range of human activity taking place at, or immediately around, the island.

The situation is not unlike space in a shopping mall: Rental space commands a higher price if there is a lot of foot traffic passing by. But even the greatest location is worth little if one does not know how to leverage it, and the same holds true for Singapore: A good location and maritime traffic are preconditions for success, but how does one get the ships to enter port? This is where infrastructure and policy become important.

Due to its geography, the southern tip of the Malay Peninsula has long been recognised for its potential, in commercial as much as in military terms.

Being Singaporean and South-east Asian

The long history of the region is replete with stories of projections and contests for power among the large polities of the pre-modern era, as well as among the early European colonial powers after about 1500.

Because of its potential to control or monitor the flow of seaborne trade as well as generate revenue through tolls and imposts, Singapore and its adjacent waters had become an object of desire, but perhaps more importantly, it became a contested space across the longue duree.

One need not look far to find evidence of this: Srivijaya, Majapahit, Siam, Aceh, Portugal, the Dutch, the British and arguably also the French projected their authority over the region with varying degrees of success.

Majapahit and Siam competed during Singapore's Golden Century in the 1300s; Aceh and Portugal in the 1500s; Portugal and the Dutch in the 1600s; the British and the Dutch alongside the Malays and the Bugis during the tumultuous 1700s.

Europe's success in contesting the geographic spaces around Singapore in the period before 1800 is due to two developments: First, naval artillery and warfare at sea; and second, the level of violence introduced by European warfare into the region. South-east Asian rulers, by contrast, were more interested in channelling human activity, harnessing labour and augmenting their status with more subjects.

Warfare and the economy were calibrated to these priorities: A main objective of South-east Asian warfare was in gaining more labour by capturing the enemy or deporting people. European warfare, both on land and at sea, significantly increased the level of violence and, with it, the human casualties of war.

There are several instances where differences in the priorities, objectives and methods of warfare surface in recorded discussions between the Europeans and the local rulers, such as in 1606 at the time of the joint Johor-Dutch campaign against Portuguese Melaka. The Dutch mistook the reluctance of the Johor nobles to risk the lives of their people and engage the Portuguese in battle as cowardice and an unwillingness to fight.

The security and stability enjoyed after 1819 have as much to do with the security regime established by the Royal Navy as with the absence of contestation between the British and the Dutch after the signing of the 1824 Anglo-Dutch Treaty. The spheres of influence established by this treaty served as the foundation of their mutual relations up until the end of the colonial era. The British order gave way to an Anglo-American one after the brief Japanese interlude during the Pacific War.

This point deserves driving home: Singapore is still located in a contested space. The stability enjoyed over the past two centuries is historically the exception rather than the norm. A suspension or even permanent breakdown of this order will see fresh projections and contestations of power, just as had been the case in earlier centuries.

Historians of the pre-1800 era have looked at Singapore in terms of a location or place. That makes sense, for settlements on the island have flourished and waned over the centuries. Some researchers have examined Singapore's rises and declines in terms of long-term cycles each lasting about a century or more. Others have described Singapore as hosting a succession of experiments.

Both approaches arrive at similar conclusions: While Singapore and its strategic potential in military and economic terms remain an underlying constant, its role has changed many times across the centuries. In this vein, 14th century Singapore is seen as an emporium for jungle and marine produce destined mainly for the Chinese market, while 15th century Singapore acted as a feeder port for Melaka and also as a naval base during the period of the Sultanate.

The port experienced a revival during the early 16th century when it served as a naval base of Johor, a gatekeeper to the upstream towns of the Johor River, and as an intermodular port near the confluence of maritime, riverine and overland traffic. 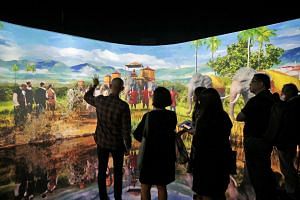 Malay Annals and the appeal of superheroes

Documentary in the works on the first Sikh in S'pore, freedom fighter Bhai Maharaj Singh

In the 17th century, Singapore became a strategic nodal point in the rivalry between the Portuguese and the Dutch. Proposals were put forward by both European parties to construct fortifications on and around the island, as well as to acquire and develop it into a colonial emporium two full centuries before Stamford Raffles set foot on Singapore's shores.

In the 18th century amid the convulsions engulfing Johor after 1699, and the relocation of the capital out of the Johor River region to Bintan and later also Lingga, Singapore lost its role as gatekeeper and naval base. It was briefly considered by the Dutch as a potential site for a colony in 1809 before the British signed a treaty in 1819 to build a trading post on the island.

What can the reader take away from all this? There have been different Singapores across history, each fulfilling different functions.

The rise and fall of these Singapores in the past had less to do with the specific policies of a given ruler or a shahbandar than with the greater geopolitical forces at work. These ranged from changes in China's maritime policy during the Song and Ming dynasties, to the rise and decline of the Melaka sultanate, Johor's dynastic succession crises, or the relocation of Johor's royal administrative centre to Bintan.

All were developments that stood beyond Singapore's immediate control. The survival of the port and settlement depended on Singapore's ability to reinvent itself or adapt to changing circumstances.

That is very unlikely to change in the future.

• Peter Borschberg is an associate professor at the History Department, National University of Singapore.

• This article is adapted from a presentation at the Institute of Policy Studies' Singapore Bicentennial Conference held on Sept 30-Oct 1.