2018 marks an important milestone in Singapore-China relations. It is the 40th anniversary of Mr Deng Xiaoping's visit to Singapore in November 1978, just a month before China adopted the policy of reform and opening up.

Coming two years after then Prime Minister Lee Kuan Yew's first visit to China in 1976, this exchange of visits between Mr Lee and Mr Deng planted the seeds of friendship between our countries and laid the foundation for the deep personal ties between successive generations of leaders and our peoples.

Many high-level exchanges were made over the years. Last September, Prime Minister Lee Hsien Loong visited China, just before the 19th Communist Party of China National Congress and met President Xi Jinping and senior Chinese leaders. In April this year, he visited China again for the Bo'ao Forum for Asia Annual Conference and had good meetings with President Xi and key leaders. We look forward to welcoming Premier Li Keqiang in November this year.

In June this year, I visited six Chinese provinces and municipalities and had good discussions with many senior Chinese leaders, including Vice-Premier Han Zheng, whom I look forward to receiving in Singapore this week to co-chair the 14th Joint Council for Bilateral Cooperation (JCBC).

We will also co-chair the Joint Steering Councils (JSCs) for our three government-to-government projects - the China-Singapore Suzhou Industrial Park from 1994, as we exchanged experiences in building industrial townships; the Sino-Singapore Tianjin Eco-City from 2008, as both countries promoted eco-friendly, low-carbon development; and the China-Singapore (Chongqing) Connectivity Initiative (CCI) from 2015, to enhance connectivity for the flow of goods, services and data between Western China, Singapore and beyond.

The JCBC was established in 2004, and is the premier platform to exchange ideas, discuss bilateral projects and set the direction for bilateral cooperation. The JCBC has expanded bilateral cooperation in line with the needs of our countries, in trade and investment, financial services, inclusive and sustainable development, human resource development and people-to-people exchanges. We also review the progress made by our seven joint business councils co-chaired with provincial leaders from Shandong, Sichuan, Zhejiang, Liaoning, Tianjin, Jiangsu and Guangdong.

The JCBC has catalysed several milestones in our bilateral cooperation. The China-Singapore Free Trade Agreement (CSFTA) was China's first comprehensive bilateral FTA with another Asian country. It was launched at the 2006 JCBC and completed at the 2008 JCBC, co-chaired by then-Deputy Prime Minister Wong Kan Seng and then Vice-Premier Wang Qishan, respectively.

The CSFTA reaffirmed our joint commitment to trade liberalisation in the challenging economic environment following the global financial crisis.

Singapore and China have enjoyed strong friendship for more than 40 years, through close communication and mutually beneficial cooperation. Our cooperation has progressed with the times, reflecting the evolving needs and opportunities in line with the development of our two countries. We should keep up the momentum.

Both sides are now working towards concluding a substantive CSFTA upgrade this year which is forward-looking and comprehensive. This will send a strong signal to the global community on our commitment to free trade and an open, rules-based multilateral trading system.

Since taking on the co-chairmanship of the JCBC in 2011, I have worked closely with both co-chairmen, then vice-premiers Wang Qishan and Zhang Gaoli. Our two countries have enhanced financial cooperation to support China's renminbi (RMB) internationalisation. In 2013, the Industrial and Commercial Bank of China (ICBC) was appointed as an offshore RMB clearing bank in Singapore, the first outside Greater China. Singapore is now one of the top three offshore RMB clearing centres globally for cross-border RMB receipts and payments with China.

Singapore is in a good position to further support China in the next phase of China's RMB internationalisation. Since June 2016, RMB financial investments were included as part of Singapore's official foreign reserves. We also supported the inclusion of the RMB in the IMF Special Drawing Rights basket in September 2016.

I look forward to working closely with Vice-Premier Han Zheng in this year's JCBC, where we will mark another milestone. We have agreed to designate our cooperation on the Belt and Road Initiative (BRI) as a dedicated agenda item with four cooperation platforms: infrastructural connectivity, financial connectivity, third party collaboration and training, and professional services.

The CCI, a priority demonstration project under the BRI, has enhanced infrastructural connectivity. Since its launch during President Xi's state visit to Singapore in 2015, progress on the CCI has exceeded expectations in four priority areas, namely financial services, aviation, transport and logistics, and information and communication technology.

The CCI-Southern Transport Corridor (STC) connects the overland Silk Road Economic Belt and the Maritime Silk Road along a route running entirely through western China, bringing new growth opportunities to provinces along the route. The CCI-STC will link western China and South-east Asia through the Chongqing-Guangxi-Singapore rail and sea multi-modal logistics route. As one of the world's busiest transshipment hubs, with connections to 600 ports globally, Singapore can connect the CCI-STC to international markets.

The CCI-STC is also an open and inclusive platform. As more users from Central Asia, China and South-east Asia come on board, cargo volumes will grow and we will enjoy greater economies of scale. This will support the "Belt and Road", Western Region Development and Yangtze River Economic Belt Strategies. 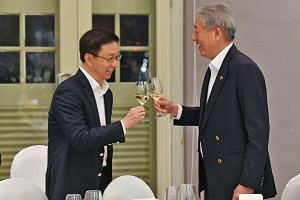 Chinese banks in Singapore have committed $100 billion - about RMB500 billion - to finance Singapore-based and Chinese companies involved in Belt and Road projects.

We have also signed a memorandum of understanding on third party market collaboration, which facilitates cooperation in commercially viable projects in Belt and Road countries. Last year, both countries launched a Legal and Judicial Roundtable co-chaired by our chief justices.

At the second roundtable in Singapore last month, our chief justices signed a memorandum of guidance (MOG) on the Recognition and Enforcement of Money Judgments in Commercial Cases. The MOG, which is the first that China has signed with another country, will enhance business confidence in cross border transactions and projects by providing greater legal clarity and support for companies.

Singapore can also provide supporting professional services as a neutral location for trusted and efficient dispute resolution mechanisms to help projects get back on track.

Singapore and China have enjoyed strong friendship for more than 40 years, through close communication and mutually beneficial cooperation.

Our cooperation has progressed with the times, reflecting the evolving needs and opportunities in line with the development of our two countries. We should keep up the momentum.

Both Singapore and China are entering new phases of development and face many common challenges. The potential for constructive cooperation will only increase further.

As Vice-Premier Han and I convene the 14th JCBC this week in Singapore, I am confident that we will break new ground and take our relations to new heights.