(FINANCIAL TIMES) - With more than one billion Covid-19 vaccine doses administered to adults around the world, debate is turning to the contentious question of whether or when to extend vaccinations to children.

The biggest vaccine manufacturers have all trialled their jabs on young people, including babies in some cases. Canada this week became the first country to approve a vaccine for children as it authorised the Pfizer-BioNTech shot, which the company said was 100 per cent effective in adolescents aged between 12 and 15.

Yet a series of interlinked questions over the ethics of giving Covid-19 vaccines to children have sparked intense debate with no simple answers. How governments respond will be a crucial factor in shaping who receives the next billion vaccine doses.

Much of the debate concerns the risk that Covid-19 poses to children. In the US, 332 people under the age of 18 have died from Covid-19 since the pandemic began, compared with more than 560,000 adults, according to the Centres for Disease Control and Prevention. The division is also stark in England and Wales, where 37 under-20s have lost their lives to the virus, compared with more than 130,000 adults.

"You would be immunising children not for their own benefit but for the benefit of the rest of the society," said Oxford University Professor Anthony Harnden, who advises the British government on its vaccine policy. "That's a really complicated problem."

The risks and benefits of vaccinating children against Covid-19 feeds into decades-old misgivings that some have about childhood inoculations, fed by unproven links to autism. The vaccine scepticism that has complicated roll-outs around the world will only be enhanced when hesitant parents are asked to sign off vaccinations for their children.

The immediate mass immunisation of children in developed nations would also put a huge strain on vaccine supplies, further delaying roll-out for the vast swaths of vulnerable adults around the world who have yet to receive a jab.

In the United States, which has administered about 250 million doses, there are about 74 million children aged under 18. If each received the two shots recommended for most vaccines, it would take a further 150 million from the global pot. The whole of Africa, by contrast, has received 32 million doses for 1.2 billion people living across 54 countries, with only 18 million shots administered.

"You don't need to vaccinate all the way down to your teen population before you send out vaccine doses to Covax," philanthropist Melinda Gates told the Financial Times this week, referring to the World Health Organisation (WHO)-backed vaccine programme that has struggled to supply poorer countries with sufficient doses.

Professor Andrew Pollard, chief investigator for the Oxford-AstraZeneca vaccine that has been at the forefront of Britain's vaccine strategy, agreed that the "jury is out" on the benefits of inoculating children.

"The reality is we have got plenty of adults (around the world) at risk who need to be prioritised," he said.

Despite such misgivings, momentum is building in a number of countries towards the vaccination of children over the age of 12. This is driven in large part by a desire to reach the "herd immunity" that would prevent mass transmission and allow life to return to normal.

"Children do get infected and can develop severe disease," said Dr Inci Yildirim, a paediatric infectious disease specialist at Yale University. "You can't leave pockets of unvaccinated or less vaccinated populations if you want to achieve herd immunity that's fast and sustainable," she said.

Children and Covid-19 - the next vaccination frontier

Dr Robert Frenck, principal investigator for trials on under-12s of the Pfizer-BioNTech jab at the Cincinnati Children's Hospital Medical Centre, said he expected children over the age of 12 to be vaccinated in the US before schools reopen in September.

In Britain, the national health service has been drawing up contingency plans to vaccinate secondary school children, though the government also insists a decision has not been reached. Pfizer has sought approval from the European regulator to use its Covid-19 vaccine in children over the age of 12.

Dr Matshidiso Moeti, the WHO's regional director for Africa, said most African countries would like to vaccinate their young people if they had access to sufficient doses. 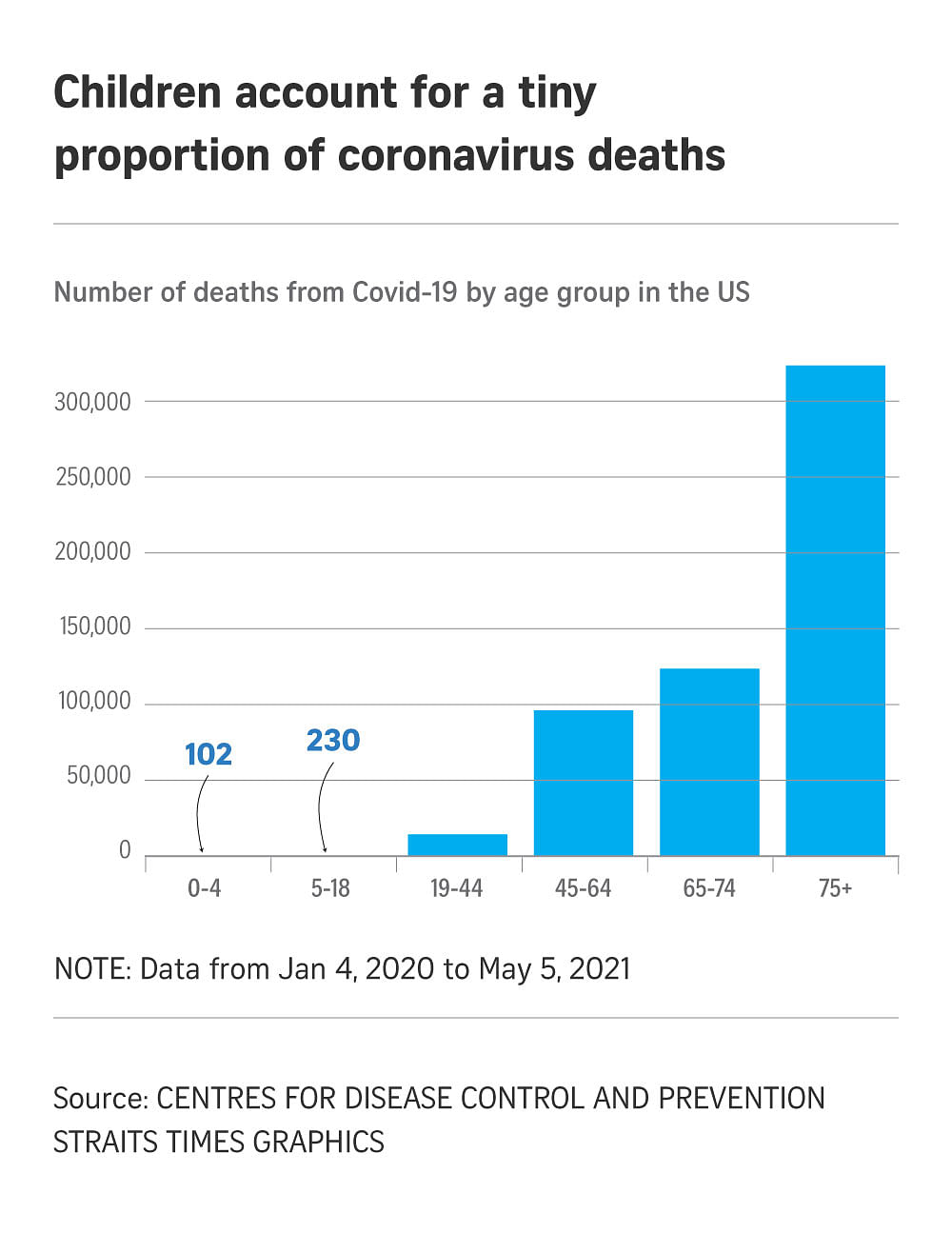 With the median age in the continent at 19, millions of children would need to be immunised for Africa to reach the 60 per cent of the population figure that is the minimum for herd immunity. "Even if younger people don't get seriously ill, they can transmit the virus," Dr Moeti said.

Pfizer is seeking US regulatory approval to use its vaccine on under-16s, with a decision expected in the coming days.

Mr Stephane Bancel, chief executive of drugmaker Moderna, said data on its vaccine trials in 12- to 17-year-olds would be submitted in "late spring, early summer". Trials on children from the youngest cohort, including babies, would yield data "towards the end of this year", he added. Pfizer is also testing its shot on younger age groups.

The pharmaceutical groups insist child safety is paramount. Their studies all follow an "age de-escalation, dose escalation" method that gives small amounts to the older participants first. They are assessed before being given incrementally higher doses. In the Pfizer trial, a 10mg dose is given to test tolerability. This is then increased to 20mg and later 30mg.

Yet such work can be fraught with challenges. The team that developed the Oxford-AstraZeneca vaccine has halted trials involving children as regulators investigate the prevalence of blood clots linked to the shot, and which particularly affect the young.

It has long been understood that young people can experience vaccine side effects more acutely because their immune systems are more active.

"Children are not little adults. Their immune response varies and gets mature as they grow," said Dr Yildirim, who leads Yale's study of the Moderna vaccine in under-12s.

Despite the ethical concerns, many believe the pathogen that brought the world to its knees will never be defeated without a global inoculation drive that includes children.

"As long as the virus continues to circulate there's a risk of new variants developing," said Assistant Professor Kawsar Talaat of Johns Hopkins Bloomberg School of Public Health. "So we need to get as many people vaccinated all over the world."

Experts weigh pros and cons of vaccinating children under 16