At long last, Korea's comfort women are getting a real apology from Japan's government for being forced into sexual slavery by the Japanese army during World War II.

But the moment is bittersweet, and not just because it's taken 70 years. The apology comes not out of a change in Japanese sentiment, but from a change in geopolitics - namely, the rise of China and the increasing need for Japan and South Korea to cooperate on mutual defence.

And it comes at the price of a promise by Seoul not to criticise Japan over the issue again - a trade of moral claims for compensation and finality.

The saga of Tokyo's non-apology has had many twists and turns, demonstrating that in the contemporary political cultures of both Japan and Korea, apologies aren't mere formalities, but laden with symbolic significance. 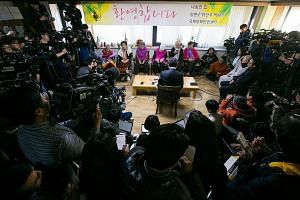 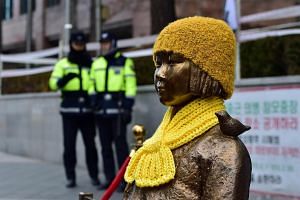 A muted 1993 apology was accompanied by compensation from private donors and marked a refusal by Tokyo to acknowledge its role in the sexual enslavement. Koreans got the point, and some women refused to take money from the fund.

The question of state responsibility has remained a sore point. A South Korean historian who has written about the role of private entrepreneurs in enslaving women during the war has been condemned by survivors who say she is minimising the Japanese government's guilt. 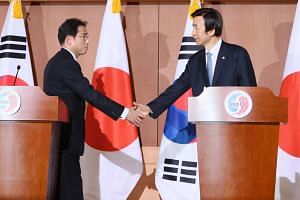 Prime Minister Shinzo Abe, a strong nationalist, isn't naturally inclined to apologise for Japan's wartime atrocities. In the past, he has angered Chinese and Koreans by visiting the controversial Yasukuni shrine, which honours Japan's war dead, including convicted war criminals.

What motivates him is the quest to improve Japan's national security. China's military expansionism is the main cause. Almost equally important is an accompanying perception that the United States may not be the strong protector it has traditionally been.

The Pacific security arrangement is often described as a "hub and spokes" model, with the US at the centre. Mr Abe is setting out to strengthen the ties between the spokes - because he recognises that the hub is not as willing a gravitational force as it once was.

In this increasingly uncertain Cool War environment, the perception of Japanese-Korean solidarity is an important aspect of Mr Abe's programme. It's why he was willing to pay the political price at home of an apology to the comfort women that accompanies a 1 billion yen (S$11.7 million) fund - this time paid by his government. And as a nationalist, he can afford to draw on his store of right-wing credibility to buy political advantage.

But the apology and the money came with a price attached: South Korea's promise that the issue of the comfort women would be settled once and for all, and that its government would not complain about it further. And Mr Abe can tell his constituents that he has bought the Koreans' silence, removing an argument that always came up when Japan was accused of being aggressive or nationalist.

That's almost always how reparations, whether legally formal or (as in this case) informal, work in the real world: The wronged party gets compensation and an apology; the party that did the wrong gets a de facto promise that it won't have to be reminded of what it did.

Without this trade, countries wouldn't voluntarily pay up, so it may seem naive to criticise the exchange, provided you think compensation is a good thing.

All tort settlements, even those between private parties, have something of this character. Compensation functions as corrective justice and the injured party is expected to be satisfied by the deal.

But morally speaking, crimes against humanity aren't the same as car accidents. Those who enslaved women during World War II weren't being negligent; they raped and dehumanised these women in particular, and the status and fundamental rights of women everywhere.

Promising a form of silence about such crimes in exchange for an apology and compensation seems inadequate to the scope and meaning of the wrongdoing. During negotiations, Japan also sought the removal of a memorial statue in front of its embassy in Seoul. South Korea's government promised to take up the issue with the survivors - implying a good-faith effort to make the memorial disappear.

Crimes against humanity are the world's business. They shouldn't be forgotten, and discussing as well as memorialising them shouldn't be suppressed or discouraged.

The interest in keeping the memory of such crimes alive also extends to the victims themselves.

Of course, they're entitled to compensation. But it feels wrong if they can get it only because their government has agreed to drop their case and, to a degree, is encouraging them to drop their efforts to shame the perpetrators.

The realities of international practice are inevitable and harsh. Individuals need states to prosecute claims against other states on their behalf. And once states are in the game, they'll behave as states usually do - trading values and ideals and honour for advancement of their interests. But that doesn't mean we always have to like it.

The memory of terrible wrongs should be preserved, as a goad to stop them from happening again. Our horror over the comfort women should steel us to act on behalf of women kidnapped into sexual slavery by the Islamic State in Iraq and Syria and Boko Haram.

No amount of reconciliation with the past should make us reconcile with those crimes of the present.